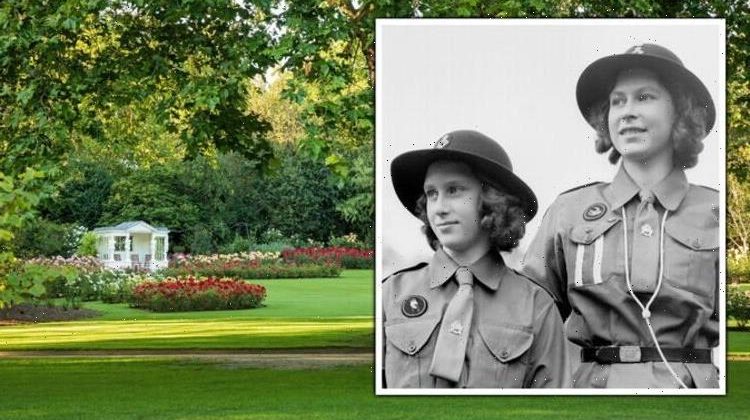 Queen Elizabeth II’s main royal residence has been Buckingham Palace since she became Queen in 1952. The royal gardens are almost as famous as the residence itself, and they are open to the public every summer for visiting. A new programme called ‘Secrets of the Royal Gardens’ is premiering on March 2 on More4.

In the first episode, experts are exploring the life of a young Queen Elizabeth and Princess Margaret, who wanted to be Brownies.

To make this happen, her father King George VI invited courtiers and palace staff’s children to join their very own pack at Buckingham Palace.

Their meeting place was in the summerhouse in the Buckingham Palace gardens.

Princess Elizabeth’s enthusiasm for Girlguiding helped shape it for generations to come.

The summerhouse is attributed to William Kent and was built in 1740, during the reign of King George II.

Nowadays, the summerhouse features an adorable corgi dog made out of wicker in an homage to Queen Elizabeth II.

There are gorgeous flowers that feature, including the deep pink Royal William rose which was planted to mark the birth of Prince William.

There is also the pale pink Elizabeth Glamis Rose which honours the Queen Mother.

What else features in the Buckingham Palace Gardens?

A primrose-yellow Magnolia tree called Elizabeth which was given to the Queen in 1962 from the Brooklyn Botanical Garden in New York is also planted in the summerhouse.

There is Dick’s Planetree, named after a former gardener called Richard, and when a new species of skuttle fly was discovered in the garden in 2001, it was named after head gardener Mark Lane.

In order to protect the existing plants, new plants must quarantine before being introduced to the garden.

However, being royal does not provide immunity, and in 2018, a horse chestnut tree that had particular sentimental value to the Queen was eventually let go after being afflicted with various different diseases.

The tree had been planted by the Queen’s father in 1914.

The garden currently has more than 1,000 trees as well as a 156-meter herbaceous border, and since 2000, it has held the National Collection of Mulberries.

The programme ‘Secrets of the Royal Gardens’ is a four-part series narrated by Hugh Bonneville, with the help of historians, garden designers, wildlife experts and royal gardeners.

They will be revealing the secrets of Britain’s most spectacular royal gardens and parks including Buckingham Palace’s 39-acre garden, the vast Balmoral estate in the Scottish Highlands and Hampton Court Palace.

Executive Producer, Peter Collins said: “The royal parks and gardens are unique in that they are full extraordinary wildlife, but also have rich, fascinating histories. Every flower and tree has a story to tell.”

Nick Tanner, Director of Sales and Co-Productions at Passion Distribution, said: “The royal gardens are as important to royal life as the grand buildings they often encompass.

“‘The Secrets of Royal Gardens’ is a beautiful and insightful journey through some of the best known, but perhaps least understood royal landscapes.

“We’re thrilled to be working with Pioneer Productions and More4.”