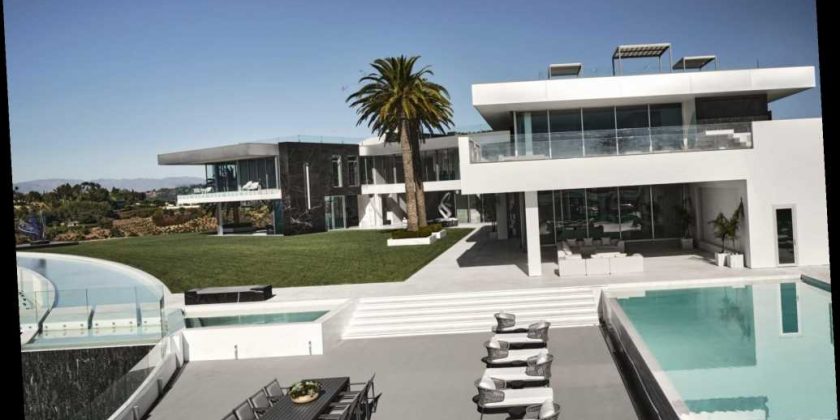 A one-of-a-kind home in Bel Air, California, is claiming the title of the world's largest and America's most expensive residence.

The mega-mansion, dubbed "The One," offers a mind-boggling 105,000 square feet of living space and will hit the market for a rumored $350 million.

The headline-grabbing property has had several superlative claims made about it over the years it has been under construction, including that it would be listed for as much as $500 million in 2018. In a 2017 feature, the New York Times pointed out that the house would likely sell for much less than that attention-grabbing asking price, citing that the Playboy mansion sold in 2016 for $100 million, after being listed for $200 million.

At the time, the most expensive house ever sold in the U.S. was a $137 million property in the Hamptons. The world record was a $300 million French chateau, purchased by a Saudi prince in 2015.

While its list of wild amenities (see below) has been touted throughout its nearly decade-long development, the now-completed interiors of the 21-bedroom, 42-bathroom home are being revealed for the first time in an archdigest.com feature. Aside from the sheer size, some of the most jaw-dropping features include the moat that surrounds the property on three sides, 400-foot-long jogging track, 30-car garage with two "car-display turntables," bowling alley, spa, cigar lounge, five swimming pools and 30-seat movie theater.

There's also a "philanthropy wing," which can host 200 guests for charity galas and has something called "sky pods" that overlook the city.

The home wasn't built for a particular client, but rather as a project for owner and developer Nile Niami, who hired architect Paul McClean and designer Kathryn Rotondi to bring his vision to life.

McClean also designed Jay-Z and Beyoncé's new L.A. pad, which they purchased for $88 million in 2017. RELATED: The Most Expensive House in the World, a $410 Million French Villa, Is Up for Sale: See Inside

"This project has been such a long and educational journey for us all," McClean tells archdigest.com. "It was approached with excitement and was thrilling to create, but I don't think any of us realized just how much effort and time it would take to complete the project."

According to the outlet, "due to recently approved city ordinances, a house of this magnitude will never again be built in Los Angeles," meaning the lucky listing agents — Branden and Rayni Williams of The Beverly Hills Estates, along with Compass's Aaron Kirman — will truly be selling "The One."

See many more photos and read the full feature on archdigest.com.