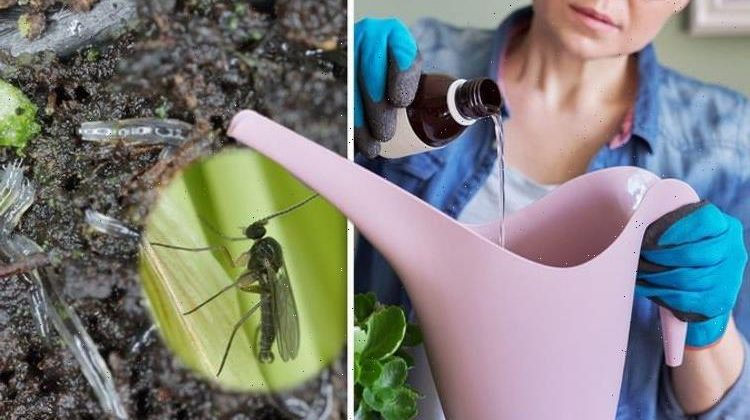 Fungus gnats are tiny flies that can quickly infest organic materials like soil and potting mix. This can then prove detrimental to any garden, with larvae chewing roots, stunting plant growth and generally being a nuisance.

Fungus gnats are not harmful to humans, however can be a definite annoyance for any gardener who discovers an infestation.

When it comes to identifying the pests, adult fungus gnats have slender legs and segmented antennae which grow to longer than their head.

They have light grey or clear wings, and if you have the common Bradysia species in your greenhouse you will be able to spot a Y-shaped wing vein.

When hatched into larvae, they have a shiny black head and and long, white-to-clear, legless body.

Sometimes you may be able to see a slime trail on the surface of your soil from the larvae, which appears if the environment is moist.

How to get rid of fungus gnats

1. Dry out your soil

Fungus gnats and their young thrive in moist, rich conditions as they feed on fungus.

You can often find fungus gnat infestations when a plant has been overwatered.

To combat this, using a fork or other tool turn up around two centimetres of soil.

You may see the larvae and eggs as you do this.

Leave the soil to dry out to around one and a half inches in depth and then you can water again.

DON’T MISS
Should you deadhead hydrangeas? Best tips on how to prune [EXPLAINED]
How to get rid of ivy – 3 easy natural methods for killing ivy [INSIGHT]
Oti Mabuse reacts as she and husband attempt home renovations [PICTURES]

Fungus gnats are naturally attracted to apple cider vinegar, and so you can trap them if you know how.

Cover with clingfilm and then piece a few times with a sharp fork.

You will find the gnats will climb through the holes you’ve made but get stuck and drown in the vinegar.

Be warned this method only works on adult gnats, and does not kill the larvae.

This tip is one touted by many gardening aficionados, with cinnamon and chamomile being natural fungicides.

Then leave to cool and mix tea with four parts water.

Water your plants with the tea mix.

Then, sprinkle cinnamon over the surface of the soil.

You can repeat this method until the gnats are gone.

If you need something a bit stronger to tackle your infestation, you can use hydrogen peroxide.

This will kill all larvae and eggs – and with adult gnats only living for around seven days you will eradicate the infestation.