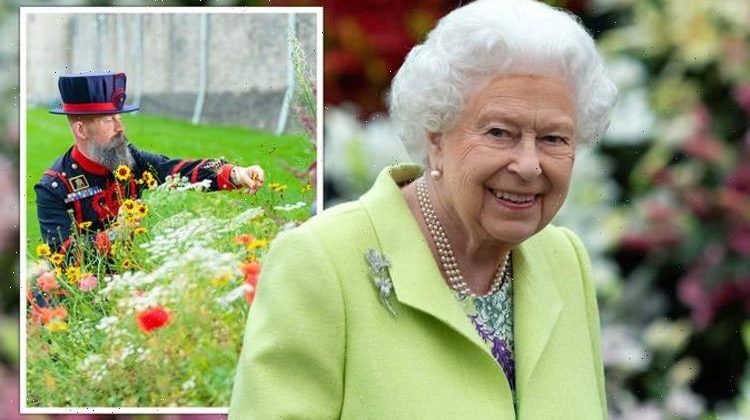 The capital’s historic Tower of London will be a key part of the Queen’s Platinum Jubilee celebrations next year. The Tower’s ‘Superbloom’ event will see more than 20 million seeds sown in the Tower moat in Spring next year, ready for a gorgeous flower display in the warmer months.

The Superbloom event promises a “spectacular, colourful, vibrant field of flowers” which members of the public will have the option to explore for themselves.

It is hoped the abundance of flowers will help to attract pollinators to the heart of London, acting as a “new biodiverse habitat for wildlife”.

Visitors will be able to immerse themselves along the winding paths of the display amongst the flora, bees and butterflies.

The event will also feature a “specially commissioned sound installation” in addition to “sculptural elements”, with the experience planned to be calming and enjoyable for all who visit.

The attraction is being designed by Historic Royal Palaces, landscape architects Grant Associates and University of Sheffield Professor of Planting Design, Nigel Dunnett.

The floral display will be a huge change of scenery for the moat, having first been designed in the 13th Century to defend the Tower.

But the moat has been used for several purposes over the years, according to Historic Royal Palaces.

The moat was used as an orchard in medieval times, as well as a place for allotments during World War 2.

Superbloom will not be the only gardening-related initiative to debut during the Queen’s Jubilee year, with many also joining in with the Queen’s Green Canopy tree-planting campaign.

The Queen has been thought to enjoy gardening as a hobby in her later years, according to the Telegraph.

So it is only fitting that a celebration of gardening features during her Platinum Jubilee celebrations.

Since the start of her reign in 1952, the Queen has frequently attended one of the UK’s flagship gardening shows, the RHS Chelsea Flower Show.

And the Queen also appears to have passed on her love of gardening and the outdoors to other members of the Royal Family too.

The Queen’s eldest son Prince Charles is known to be a gardening enthusiast, as is his daughter-in-law Kate, Duchess of Cambridge.

Charles and Kate have both helped to create their own gardens at the Chelsea Flower Show in previous years.

So the Superbloom event may receive a few visits from green-fingered royals when it begins next year.

How can you buy tickets for Superbloom?

Visitors will be able to visit Superbloom from June 1 to September 18, 2022.

But people can register their interest now to find out more information and when tickets are released from Historic Royal Palaces.

More information on Superbloom can be found on the Historic Royal Palaces website HERE.