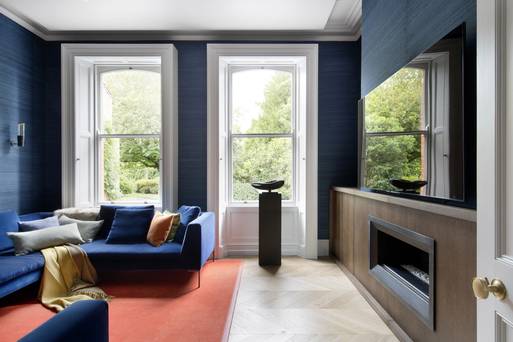 Q: How do you create the best interior in Ireland?

A: It’s a team effort. That’s why, when interior designer Maria MacVeigh collected the award for Domestic Interiors at the 20th annual Irish Design Awards last Thursday night, she was quick to acknowledge her team. Actually, most of them were there, cheering her on.

Creating a prize-winning interior isn’t just a matter of waving a magic wand. If it’s a big project, it takes a lot of people to make it happen. In this case, the gang included Ivan McCarthy (site foreman); Eoin Lyons (interior designer); Patrick Kerr (lighting designer); Gary O’Brien (specialist joiner); and Bernard Hickie (landscape designer). “There were a lot of us,” MacVeigh says, “engineers, builders, and joiners… It was a very happy site.” She and Hickie also won the award for Architectural Design for the landscaping of the same project. The Irish Design Awards is an annual competition organised by the Institute of Designers in Ireland. Winning an award is about as close as you get to an Irish Design Oscar. The awards ceremony took place at Dublin’s CHQ building on January 24 and, like the Oscars, the winners didn’t know that they’d won until their names were announced. Wild excitement! There was a sense that all of the shortlisted designers, in all the disciplines, had worked very hard to get there.

MacVeigh’s winning project has a polite veil of secrecy over its location.

“It’s somewhere in Ireland,” she says.

“But my clients are super-private. I’m not even going to say what county it’s in!” The project was a large suburban house, built in 1878 and recently purchased in poor repair. “There were two main challenges,” MacVeigh explains. “The first was to extend the house while protecting the privacy of the site and the second was to upgrade the traditional building and work out how to connect it with the new spaces.” The original building was square in form, with four reception rooms on the ground floor. She redesigned these as a series of interconnecting rooms with sight lines arranged so that you can see through from one space to another, and out into the kitchen, courtyard and garden. Once the layout and the flow of the interior had been established, she invited Eoin Lyons, interior designer, to collaborate on furniture, fabrics and finishes. “We used abstract images from fashion photography to develop a concept for each room,” she says. These concepts were developed into furniture layouts, colour schemes, and decorative elements.

MacVeigh decided to restore all the cornicing and traditional joinery to the same standard as the original, even to the extent of using the same tools that Victorian craftspeople would have used. Working with two teams of joiners, she developed the oak joinery throughout the project and a series of bespoke items: a bed-head in maple and brass; cabinetry in oak and burnished steel; a TV unit in silk and brass; and detailed brass-and-oak window reveals. Then came the sienna stone, the polished plaster, the linen wall finishes, the lighting, and the furniture. “It’s rare to be able to work on a project from the macro through to the micro,” MacVeigh says. Happily, her clients were committed to finishing the house to an extraordinary level of detail. “That allowed us to apply all the layers and textures that bring the interior to life.”

Not all the shortlisted projects were on such a grand scale. Denise O’Connor of Optimise Design won Highly Commended in the Architectural Design category for the renovation and extension of her own home in Goatstown, Dublin (the project was also shortlisted for Domestic Interiors). “The starting point for the renovation was that we needed a bigger fridge and space to cook and entertain,” O’Connor explains. “Now, with the new kitchen, cooking can be a family affair, even the kids can get involved. Extending this part of the home has created a whole new way of living for us all.” The dining area is close to the garden, which underscores the connection between inside and outside. “The furniture layout was critical to this,” she says. “Now, one of my favourite places to sit is on the sofa, looking out onto the garden.” Using underfloor heating freed up wall space for storage. “Even though it’s open plan it’s incredibly easy to keep tidy. We chose drawers over cupboards… With drawers, it’s much easier to find everything.”

David Leech’s Conservatory Room, another of the shortlisted projects, also involved a dialogue between indoor and outdoor spaces. It was made using everyday construction techniques and materials. “These inexpensive materials are easily sourced, and importantly, tradesmen and local builders know how to use them,” he says. “We believe that a rich architecture does not necessarily mean an expensive one!”

The final two shortlisted projects were Reenmore, a new home designed by Patrick Lloyd of Legge Architects, and Roisin Lafferty’s design for the interior of Bolton Coach House. In this project, a historic building with a recent extension, the old and the new parts of the building invited different treatments. The old part is full of original detail, arched brick ceilings and unexpected passageways. The extension, in contrast, is minimal with sleek poured concrete, polished marble, walnut and brass. This modernity contrasts nicely with the raw industrial brick and Lafferty has engineered the transition between the spaces with what she describes as “mild steel portals” – metal constructions that reference doorways.

“It’s my favourite house that we’ve done!” Lafferty says, when I meet her after the award ceremony. I ask if she’s disappointed not to win. She shakes her head. “I don’t mind losing to Maria. She lectured me in college and she’s always been one of my idols.”