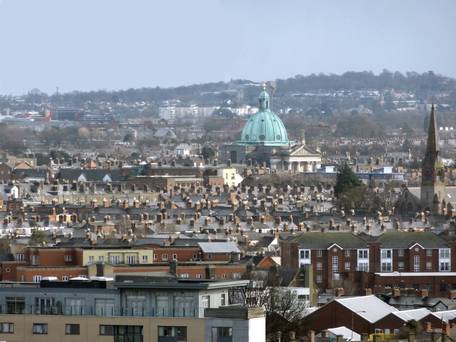 Everyone is ‘for’ more social housing.

Next month lots of companies will offer donations to Focus Ireland or the Peter McVerry Trust instead of sending expensive Christmas cards to clients. They’ll take out large ads in newspapers to let them know.

There’ll be festive Santas jangling collection boxes on Grafton Street, while the food station feeding the homeless vies with shoppers outside Dunnes Stores.

We’ll recoil in embarrassment and genuine sadness at the thought of people sleeping on the streets, or spending Christmas Day in a hotel room with a packed lunch. We’ll get angry at ‘The Government’ for failing to do anything about this. We’ll question loudly why we’re not housing these people instead of filling hotels and B&Bs with them.

And again in 2020, everyone will clamour for more social housing to be built.

Unless, obviously, it’s nearby.

Or around here. Over there is better; far away even more suitable.

A UCD study, ‘The Future of Council Housing’, published by Dr Aideen Hayden and Professor Michelle Norris, revealed that Ireland Inc has built no fewer than 365,350 homes for social housing tenants since the late 19th century. We were far better at doing it then than we are now.

In 2016, 22pc of all housing stock was council housing, but public funding had fallen an incredible 94pc during the austerity years of 2008-2013, meaning not only are we playing infinite catch-up, but we’ve lost sight of the goal.

The report examined the wilful policy of transitioning from public housing to private accommodation for council tenants. This was done deliberately because it was considered more efficient, flexible and cheaper. All of this is true, so the Housing Assistance Payment (HAP), rent supplement and purchase of stock through Approved Housing Bodies created a new landscape for housing social tenants, for whom we had actually built reusable stock for generations.

It put the onus back on the tenant, rather than the council. It’s a handout rather than a hand-up.

At the same time, the State chose, for somewhat bewildering reasons, to continue to flog off the social housing stock it had so carefully built up, at discounts of 40-60pc to sitting tenants, giving them cheap loans to take on a mortgage that a mainstream bank wouldn’t give them due to the default risk. Councils do this in the main to get capital funding for repairs and maintenance of other properties they own, resulting in an ever-decreasing circle.

Social tenants are expected to pay their rent, in full and on time. Why wouldn’t they since it equates to just 15pc of their income? It is modest (extremely so by private rent standards where tenants report up to 50pc of their incomes going to pay for accommodation; the agreed standard in the Western developed world is no more than 35pc of income for housing – indeed, this is the banking benchmark for lending).

However, in an extraordinary revelation, Dublin City Council, to take one example, reports a shocking €31m unpaid (for which read, uncollected), from an estimated 14,730 tenants in arrears. This amounts to an incredible 60.3pc of all its tenancies (24,400), or almost two in three renters. Ninety-six of them owe over €20,000 to their landlord, the taxpayer.

Evictions are rare, so moral hazard abounds. Why should I pay when my neighbour does not?

That some may be genuinely financially bereft is clear, but the opportunity to engage early and often with officials before the situation racks up to impossible levels is lacking.

Using tenants’ incomes rather than a market rate to set rent is admirable, and, as the research points out, “has significant equity and anti-poverty benefits particularly in view of the low average incomes of tenants in this sector”.

However, problems are almost inevitable where this is not effectively policed with consistent intervention. In any event, the amounts collected are not sufficient to meet the income needs of the Council, so it is proposing to punish the compliant payers by increasing their contribution to 16pc of income to make up for the recalcitrant ones.

“There is no relationship at all between rents and the costs of providing council housing,” concludes the report. The evidence presented in this report indicates that rents do not generate enough money to maintain council housing property.

It points to the “complete disconnect between the rents charged and the costs of the housing service [meaning] that local authorities have neither the resources nor the incentive to maintain dwellings efficiently or to ensure they are swiftly re-let when they become vacant”.

It recommends what we all recommend: “More council housing is required, particularly in urban areas.” It warns that housing policy was ‘pro- cyclical’ in recent decades, which readers will recall as the Charlie McCreevy way of doing business … “When I have it, I spend it. When I don’t, I don’t.”

“It achieves poor value for money because spending is concentrated at the peak of economic cycles when land and construction costs are likely to be higher, while during recessions, when costs usually fall, funding for council housing provision also declines.”

Mark Keenan is away