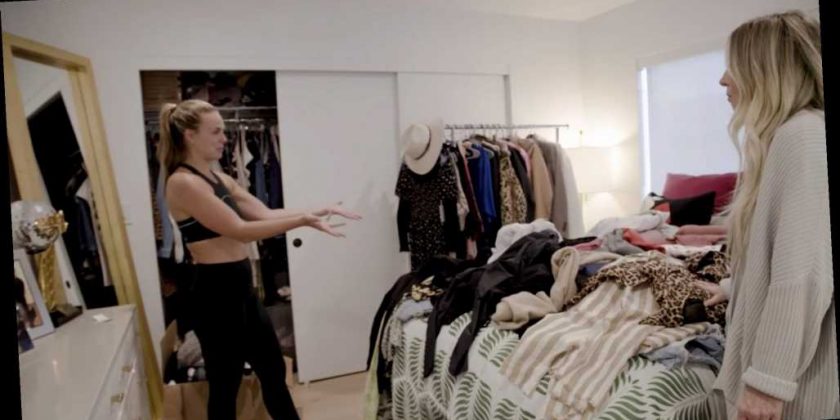 Hannah Brown is stepping into the upcoming holiday season in a totally fresh space.

The former Bachelorette, 26, recently enlisted the help of the California-based sister-run company Home Sort to give her "disaster" Los Angeles apartment a makeover it desperately needed, according to the star.

"Hallelujah, praise the lord. Today is a day that the lord has made for me. Y'all, I live in disaster. Like, truly disaster. So today, I have the Home Sort with me, and they're going to make my life a whole lot more organized and just better all around," Brown says in the Wednesday video, captioned in part, "Get ready for a real transformation."

"I'm so excited. I called my mom twice already," she quips in addition.

Brandie, one of the sisters from Home Sort, then tells her, "You don't think that having your space organized will change your life, but it will totally change your life." First up is Brown's "kitchen/living area," packed with a mix of disorganized food items, non-food products — and even random additions like an inflatable dinosaur costume, which she bought for her brother to wear when he visits.

Upon entering her closet, Brown tells Brandie and her sister Ryan, "The instant anxiety hits right now." A mix of clothes, bags, shoes, stuffed animals, and more are haphazardly strewn about as Brown admits, "There's nothing about this that's organized." She has also "run out of space," so many of her clothes litter the top of her bed.

Brandie and Ryan soon work their magic, though, and get the apartment looking much more clean and organized, from pantry sections with dedicated containers for specific items to dresser drawers that are separated (and labeled!) by clothing category. Brown's shoes are now on display in holders inside her closet and clear drawers, too.

All the clothes are also gone from the top of her bed — and she even has extra room inside one closet in case she procures more items she needs to hang in the future.

"It's going to change the way I live. So it does change your life because I'm like, 'Oh, there's places things should be' and not just on this bed," the Dancing with the Stars champion says of the makeover at the end of her video. Brown was recently joined by Tyler Cameron in a video clearing the air about their post-Bachelorette relationship, where she insisted that nothing happened romantically between the two in quarantine amid the ongoing coronavirus pandemic: "People think we were hooking up the whole time. Never kissed."

Brown spent several weeks in Jupiter, Florida, with Cameron, 27, and the "Quarantine Crew," which also included new Bachelor star Matt James and Cameron's brother Ryan Cameron. The group filmed various TikTok videos, including the "Flip the Switch" challenge, during which they joked that Cameron "finally got into Hannah's pants."

"We went from a dating show where it didn't work out, then not talking to each other, trauma happens, we hang out, to living together," said Cameron in the YouTube video. "Twelve times more the amount of time in that house together for those 18 days than we did on the show."

Brown explained that she "wanted to get away from my own trauma" when she decided to stay in Jupiter to be by Cameron's side after attending his mother Andrea's funeral.

"You were able to bring light to a very dark time. It was needed," he told her.