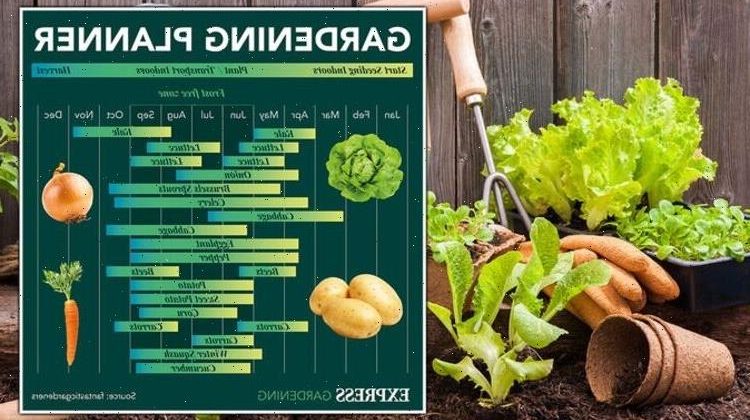 As the sunnier days of spring warm parts of the UK, many gardeners may be keen to get back to tending to their outdoor crops. Growing your own vegetables is an easy way to start your green-thumbed journey, and will likely save you some money on groceries once your crops are ready to harvest.

However, every vegetable comes with its own unique specifications and runs on its own calendar.

While some crops should be planted in spring, promising an abundant harvest once the summer arrives, others are best suited to being sown in the chillier months.

When should you sow, transfer, plant and harvest your vegetables?

Sunshine and warmth are an aubergine’s (also known as eggplants) key to success when growing them, so they do best in a greenhouse.

Seeds should be sown early in the year, and can even be stored in an airing cupboard so long as the temperature is right.

Aubergines can be harvested individually as soon as they are ripe, with a glossy skin – usually from August onwards.

Beets are fairly easy vegetables to grow which makes them ideal for beginner gardeners.

Seeds should be sown in small batches at fortnightly intervals between March or April and June.

RHS advises thinning out seedlings when they reach around 2.5cm in height.

Beetroot can be harvested from early summer through to mid-autumn, depending on sowing time and variety.

Brussel sprouts are particularly popular in the winter months, as they are in their peak season at this time.

Seeds can be sown under cloches or fleece, or in a cold frame, between early March and early April

The sooner they are sown, the sooner your will get your crop.

The RHS advises: “For an early crop, sow in a greenhouse in small pots or modular trays in February, for harvesting from August.”

Between mid-May and early June, normally when plants are between 10 and 15cm tall and have around seven true leaves, gardeners should transplant them to their final growing position.

If outside, this should be a sunny but sheltered site.

Early varieties of Brussels sprouts can be harvested as early as August.

RHS adds: “With later cultivars, the flavour is improved once the sprouts have been frosted.”

Cabbages are a vegetable plot favourite, perhaps because they are relatively easy to grow.

Cabbages can be sown either directly in the ground outside or in modular trays (and left outdoors).

Most often, cabbages are sown into a ‘seed bed’, which is a site away from the main vegetable plot, then transplanted later in the season.

Summer cabbages should be sown between late February and early March under cloches or similar cover. They should then be transplanted to their final position between May and June.

Winter cabbages should be sown in April or May to be transplanted to their final position in June or July.

For a harvest of spring cabbages, sow seeds in July or August then transplant in September or October.

Homegrown carrots can be extremely delicious, even if they don’t look as uniform as your supermarket vegetables.

Carrot seeds are best grown in full sunlight, straight into their final position. The RHS states: “Early varieties can be sown in February or March under cloches or covered with fleece. The main outdoor sowing season is from April to early July.

“The seed packet will state whether it’s an early or maincrop variety.”

Carrots can be harvested from late spring to autumn. The vegetables are usually ready between 12 and 16 after sowing.

Celery can be sown between mid-March and early April in seed trays, modules or pots of moist compost at 15C.

Sowing seed directly into their final position reduces the risk of transplant shock, but the RHS says it is better to start in trays or pots and transfer modules as soon as the seedlings can be handled.

During the growing season, ensure your celery is getting plenty of water.

Make sure plants are properly hardened off before planting out at the end of May to early June.

You should be able to tell your celery is ready to be harvested when it reaches the desired size.

This is most typically between August and October.

Sweetcorn grows best during the hot days of summer, which makes spring a great time to sow.

Sweetcorn seeds should be sown indoors, in a room between 18C and 21C, between mid-April and early May.

The RHS advises: “For an extended cropping season, try sowing early, mid-season and late cultivars at the same time, or sow one early cultivar another two times, three weeks apart.”

Seeds can be sown outdoors in late spring in the ground or in pots.

You should make sure the soil is above 10C.

Cucumber seeds can be sown from mid-February to mid-March, though prefer to be indoors.

You can store them on an indoor windowsill or in a heated propagator.

If you have an unheated greenhouse, sow your seeds in April.

If you want to sow directly outside, you should wait until late April or even early May when the risk of frost has passed.

Outdoor varieties can be sown directly in their growing site in late May or early June.

Cucumber crops should be ready to harvest between mid-summer to mid-autumn depending on where they were grown and the climate.

Kale is typically sown into a seedbed, away from the main vegetable plot, then later transplanted to its final growing position.

Kale seeds should be sown between March and June in sun or light shade.

Young kale plants should be moved to their final growing position when they have five or six true leaves.

Start to remove young leaves from the top of the plant from September onwards.

Lettuce comes in all shapes and sizes, and care instructions may vary ever so slightly depending on the variety of lettuce you are goring.

Generally, lettuces like to be grown in full sun in moisture-retentive soil. The RHS advises that early and late sowings may need protection against cold, using cloches, plastic tunnels or horticultural fleece.

For summer and autumn crops, sow your seeds outdoors from late March to late July. For an earlier crop, sow indoors in early February and then plant out in early March. You may need to use a cloche or plastic tunnel at this time.

For spring crops, sow a cultivar in September or October, either in an unheated greenhouse or in mild areas under a cold frame.

You can harvest lettuces from late spring through to winter.

Get the latest three-day weather forecast where you live. Find out by adding your postcode or visit InYourArea

Onions can be sown directly outdoors from late winter until mid-spring once the soil is drying out and beginning to warm up.

Gardeners can also sow onions in mid-to-late winter and keep them in a greenhouse.

Before transplanting indoor-sown plants outdoors in spring, be sure to allow them to harden off.

Alternatively, you can grow onions from immature bulbs, known as “sets”, which can be bought in garden centres.

The RHS states: “They are usually planted in spring, from mid-March to mid-April. Some cultivars are suitable for planting from October to mid-March – these are less sensitive to cold, which would otherwise cause bolting. Autumn planting is not suitable in heavy soils prone to waterlogging, as the crop is more likely to succumb to disease.”

Autumn-planted sets are ready to harvest by early to mid-summer, while spring-sown or spring-planted onions are ready in late summer to early autumn.

Potatoes are grown from specially prepared ‘seed’ potatoes. RHS advises people “chit” the seed potatoes before planting. This means allowing them time to start spouting shoots before transplanting them into the ground.

Potatoes need “earthing up” as they grow to protect any early shoots.

The RHS explains: “Once the stems are about 23cm tall, draw soil up around them, creating a ridge about 15cm high.

“As the stems grow, repeat the process several times. The final height of the ridge should be 20–30cm.”

Potatoes can be planted between late March and late April in a sunny site.

Potatoes are usually ready to be harvested between June and October, depending on when they were planted.

Sweet potatoes are native to warmer climates and as a result like to be grown at temperatures between 21C and 26C.

They should be transplanted from their pots once they have plenty of roots into their final growing position.

They are usually planted between March and April.

You can harvest sweet potatoes after four to five months, once the leaves turn yellow and die back in late summer or autumn before any frosts arrive.

Winter squash comes in all manner of shapes and sizes, but most are relatively easy to grow from seed.

These seeds should be sown in either April or May, depending on when you want them to be harvested.

The RHS states: “Squashes are usually sown indoors in pots, to get them off to an early start, then planted out after the last frost.

“This will usually give you an earlier and larger crop, and is particularly useful in colder regions.”

Seeds can also be sown outdoors in the spot where they are to grow in late May or early June.

The RHS explains: “Indoor-raised plants can be planted outside after the last frost in your area, but first you must harden them off to acclimatise them to outdoor conditions.”

Winter squash can usually be harvested as early as mid-summer. Most often crops are ready between July and October.