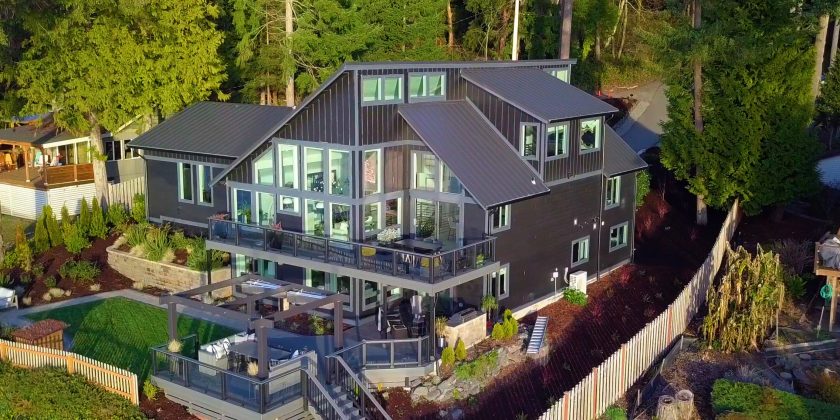 If you were disappointed you didn’t win the HGTV Dream Home in 2018, now you have a chance to buy it.

The home, located in Gig Harbor, Washington, was designed specifically for HGTV’s annual dream home special, where interested contestants enter to win a fully renovated home along with additional prizes. According to HGTV’s website, the home was included in a prize package that was valued at over $1.8 million.

Initially, the home was awarded to Nashville native Emily Muniz, 29, after her name was randomly drawn from 123 million entries. Muniz said she was attracted to the home’s waterfront location and the guest bedroom (which she pinned to her Pinterest board) that mixed pink with blue to strike a balance between feminine and masculine design aesthetics.

Muniz added that she fell in love with the home’s location after she and her husband went on their honeymoon in the area.

“With the house being on the water, you couldn’t ask for much more,” Muniz told HGTV.

Muniz and her husband, who share a three-year-old daughter, also won a Honda Accord and $250,000 to assist with the home’s mortgage in addition to the fully-furnished abode.

However, it seems moving into the home was not in the cards for Muniz and her family, as now, the home is listed on the market for $1.899 million with Morrison House International Realty.

According to Country Living, Muniz is among the vast majority of HGTV Dream Home winners who opt to sell their home or accept the cash prize alternative.

“Of the 21 people who’ve won Dream Homes over the years, only six, or about 28 percent, actually lived in their home for more than a year,” the publication reports. “The vast majority either took the cash alternative or sold the house back to the developer within a year of winning.”

Based on an analysis by Vocativ, the grand prize typically comes with a federal income tax bill of nearly $700,000, plus income and real-estate taxes that vary in price based on the home’s location. The cash prize typically carries a $500,000 tax liability and does not come with real estate taxes or any of the costs associated with owning a property.

HGTV did not immediately respond to PEOPLE’s request for comment on the reason for Muniz’s sale.

The 3,591-square-foot home is outfitted with four bedrooms and three and a half bathrooms, including two master suites.

Inside, the home gives off a rustic coastal vibe, with accents like a nautical roped chandelier in one of the bathrooms, and a fish hanging over one of the beds. When designer Brian Patrick Flynn transformed the property, he told HGTV he wanted to give the home an aesthetic of “livable modernism.”

It’s apparent that creating a functional space for entertaining was also important to Flynn and the HGTV team, as the bottom floor of the three-story home features a wet bar and wine fridge, along with a media room and two bedrooms. The lower level extends outside to the star-worthy backyard, complete with covered seating area, where the home’s residents can stare out at the picturesque waterfront views.

The main floor of the home is anchored around a massive open kitchen with a center island. The main floor also provides easy access to the outdoor dining area and grill. Finishing off the main floor is the living room with fireplace, and the junior master suite, which features an en suite bathroom and walk-in closet.

RELATED: It’s Finally Here! See HGTV’s 2019 Dream Home (and Find Out How You Can Enter to Win It)

On the top floor of the home sits the main master suite, which has its own sitting area, vaulted ceilings and a custom walk-in closet.

While this listing provides the opportunity to own a stunning house that’s been featured on TV, if you aren’t ready to shell out nearly $1.9 million for a home, there’s still time to enter to win the 2019 HGTV Dream Home, located in Whitefish Lake, Montana. Viewers who want to call the mountain oasis home can enter to win the grand prize (the custom-designed home, a 2019 Honda Pilot Elite and $250,000) until Feb. 18.