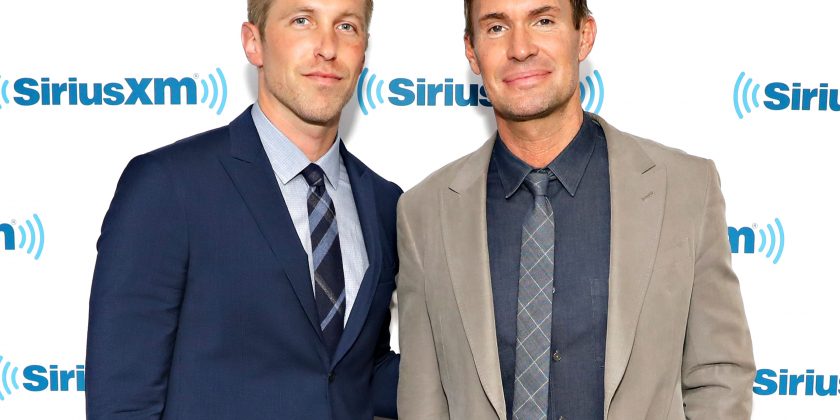 Jeff Lewis and Gage Edward are taking a break from their 10 year relationship.

The Flipping Out stars — who have dated for a decade and share 2-year-old daughter Monroe — are living in separate residences now, Lewis revealed on Thursday’s episode of his Sirius XM radio show Jeff Lewis Live.

According to Lewis, the two had been living in separate rooms in the same house for the better part of a year up until Wednesday, when Edward moved out of their home and into a hotel.

“This has been a long time coming. We were in separate rooms a significant portion of last year, so it was kind of like a roommate situation,” Lewis, 48, said, explaining that the two had be trying to work through their problems.

“I think the reason we hadn’t ripped the Band-Aid off and separated is because a) we had the baby and neither one of us want to leave the baby and then b) financially, it wasn’t the best time because I have four properties right now — three of which are in construction and one of which is sellable.”

Edward did not immediately respond to PEOPLE’s request for comment.

It’s not clear how the couple will handle custody of Monroe. Asked about it by a caller, Lewis said, “I don’t even want to go there,” though he did admit earlier in the program, “I’m now a single dad ’cause the baby is with me.”

Lewis characterized their recent relationship as closer to “friends with benefits.” While they were not sleeping in the same room, they often had sexual encounters, Lewis claimed, which he says, also made it hard for Lewis and Edward to part ways.

“We were like friends with benefits. We would still hook up, inconsistently,” Lewis said. “I was still encouraged, like, ‘There’s still something here… he’s still interested in me… But there was a real lack of intimacy because he wasn’t in my room. So I actually felt very lonely and sad and disappointed.”

Eventually, the breaking point came when Edward allegedly told Lewis that their physical relationship was “confusing.”

“That arrangement doesn’t work for me. I already feel tortured by this — for months, and months, and months,” Lewis recalled on Jeff Lewis Live, explaining that he has asked Edward to leave. ” I said to him, ‘I want to be very clear, I’m not throwing you out. I’m not breaking up with you. I’m here. You need time and space to get perspective.’ “

“I hope he gets the clarity and perspective he needs,” Lewis continued. “There’s so much anger that he has lost sight of the good things. Every time we have one of these discussions, it’s so overwhelmingly negative. I have a very different perspective. Last year was hell, but I remember nine pretty solid years. We had some fun. So I said to him, ‘I encourage you to work through that resentment and focus on the positive things because there could be more to come.’ “

RELATED: Jeff Lewis Hits Back at Daughter’s Surrogate Who Claims He Secretly Filmed Her Giving Birth

Lewis did express regret that he hadn’t fought harder for the relationship throughout the past year.

All that changed in the last two months, when Lewis says he started to see Edward looking for apartments.

“I reacted very negatively for everything that was happening last year. I didn’t respond well and I didn’t handle myself well. But then in January I was like, ‘Wait a minute,’ ” Lewis said. “Had I [checked in] 6 months ago, it would have been better… I didn’t think he hated me as much as he does.”

RELATED: From Jenni Pulos to Zoila Chavez, Everyone Jeff Lewis Has Parted Ways With on Flipping Out

He went on to explain that his therapist has said that if the two were to try again, they would have to throw out their previous relationship and start over. “If this happens, I’m kind of excited about this courting process,” Lewis said.

As for what exactly went wrong between them, Lewis claims that their different communication styles played a part, as did their 10-year age gap.

“There’s a lot of negatives with dating Jeff Lewis, but you always know where you stand with me. I dated someone who is not a good communicator. Has never been to therapy and has held things in for 33 years. It breeds a lot of resentment,” Lewis said.

News of Lewis and Edward’s relationship troubles comes after a hard year for the couple, which included the death of Lewis’s grandmother and a massive feud between Lewis and Flipping Out costar Jenni Pulos, which may lead to the end of their Bravo series after 11 seasons.

Their news also follows nearly 8 months after the couple’s surrogate, who carried their daughter, filed a lawsuit against them.

Alexandra Trent is suing the couple as well as Bravo and the show’s production company, Authentic Entertainment. She claims that the show filmed her vagina without permission during her delivery and that Edward and Lewis made “disgusting” remarks about her.

She is seeking damages for unlawful recording, invasion of privacy and fraud.

Lewis has strongly refuted these claims. “This is like a blow to the head. We are completely blindsided by this,” he said to PEOPLE at the time. He maintains that Trent signed away her right to privacy in a contract when she agreed to appear on the show.

The legal action is ongoing and will likely go to trial.