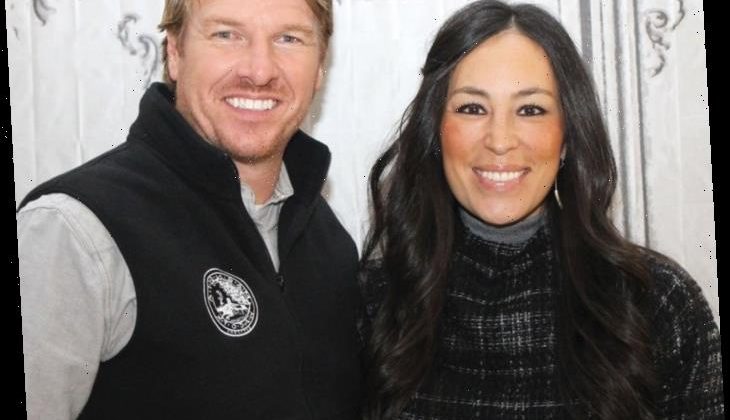 In a sweet post to mark their 17th anniversary in May, Chip shared a throwback photo of the couple at their wedding, along with a tribute to how Joanna is still “the girl of [his] dreams.”

“Juuuust married! Everything about you has made everything about me better. And 17 years later I’m still learning from and loving on the most incredible woman in the world. After all these years Joanna Lea Stevens, you really are the girl of my dreams.. Happy 17th sweet girl. I love you🎈,” he wrote.

There Wasn’t an Instant Spark for Jo In the summer 2020 issue of Magnolia Journal, the mother of five opened up about the early days of her relationship with Chip.

“It wasn’t love at first sight for Chip and me. For one thing, I was typically attracted to guys who were more on the quiet side,” the Fixer Upper alumna wrote in an essay she penned for the magazine titled “Slow Yes.”

“Based on our first date, it was clear that Chip was anything but quiet,” she recalled, adding that he “was all over the place,” talking about all the companies he dreamed of starting, houses he planned on flipping and risks he was looking forward to taking.

“I was wondering if he was just a bit crazy,” Joanna wrote in the issue, which explored the theme of risk-taking. “In my mind, I somewhat instinctively checked his penchant for risk and chatty nature as two reasons we probably wouldn’t go on a second date.”

But luckily, she decided to give him another chance, noting that she couldn’t help but be intrigued by the way he saw the world.

How Chip’s ‘Ideas and Dreams’ Won Jo Over

Later in the essay, Jo detailed how she came to embrace Chip’s larger-than-life way of thinking, instead of walking away.

“All the ideas and dreams he held for himself were anything but ordinary, and he talked about the world around him through the lens of untapped potential,” she wrote. “When Chip did eventually stop talking, if only to take a breath, I found myself wanting to fill the silence with plans and dreams of my own.”

During that time, Joanna said, she had half-baked dreams and ideas that she figured she would never accomplish because she didn’t see herself as a risk-taker. But after meeting Chip, she saw that she had untapped potential — and that together they could build something extraordinary.

“This near-stranger had drawn out a side of me that I didn’t yet know existed,” she wrote. “My gut told me there was something there worth waiting for. Our lives have beat to this same rhythm ever since.”

The Secret to Their Lasting Love Being married for 17 years with five kids and a handful of thriving lifestyle businesses is no easy feat. In PEOPLE’s 2019 Kindness Issue, the couple revealed how they’ve been able to make it all work.

“Jo and I are the best of friends, and yet obviously we don’t agree all the time,” Chip admitted. “I’ve conceded to her dozens of times, if not hundreds throughout our relationship, and she has done the same with me.”

“In the end,” he continued, “Jo and I sincerely care more about one another than we do about one of us being right during a debate.”

For Jo, it’s Chip’s “kindness with no strings attached” that has raised their family to new heights.

“If you are stranded on the side of the road, you want Chip Gaines to drive by, because he’ll turn around and help,” she said. “It doesn’t matter what’s going on, who he has to meet, and he expects nothing in return. It’s that quiet kindness that’s challenged me, our children and everyone here at Magnolia. We all need more of that in our lives.”

Why They Don’t Consider Themselves a ‘Match Made in Heaven’ On the outside, the couple embodies what a perfect partnership would look like — but that’s not exactly how they feel about it.

“Match made in heaven is not the term you would use to describe us,” Joanna told PEOPLE in 2016. “But when we mixed our personalities together, it created a spark.”

“From day one, when we were dating, I realized he is not going to be put in a box,” she said of Chip. “And if there’s a rule, he’s going to break it.”

The couple had to work to find their groove in order to pursue the life they envisioned for themselves.

“Early on we had our fair share of fights and figuring out where the boundaries were. He’s good at the big picture, and he’s good at risk. I like the details,” said Jo.

It was the combination of what they each brought to the table that led to their strong partnership.

“If it were just up to me I would stay in a cubicle and file paper,” she said. “But Chip has always pushed me to be the best me. I said I wanted to learn the drums once, and the next day there was a full set in the house. He empowers me to be confident.”

How They Overcame Hard Times “The four or five years before we did the show, when the housing crisis hit, things were so hard for us,” Joanna said at the closing session of INBOUND, the annual conference held by HubSpot in Boston, in 2019. “For years, every Friday we were saying, ‘Are we gonna make it?’”

“But we kept pressing through, even in those hard times,” Joanna told the crowd. “The value of what we learned in that is something I’d never want to do again, but I’d never not want that. The hard is what makes us appreciate this.”

Chip touched on how they managed during the economic downturn while also balancing their roles as partners and parents.

“This is a very hard thing to do, to work together with someone you also have a relationship and a family with,” Chip said.

“We definitely disagree. It’s not perfect. But for Jo and I, it really is a special bond we’re extremely proud of. We work really well together,” he continued.

“We’re this odd yin and yang, this whole opposites attract. It really was this powerful chemistry that happened early in our marriage.”

Why Chip Stepped Back to Let Jo Take the Lead

Although the father of five had always dreamed of becoming a star, he’s happily taken a supporting role to his wife after he saw the effect Jo had on people. In the spring 2020 issue of Magnolia Journal, Chip recalled moments that made him realize it was his wife that was meant to shine.

“The reality was, when Jo spoke, it changed the dynamic of our meetings,” he wrote. “People would straighten up in their chairs and lean in . . . I was slowly realizing that this universe we’d stepped into was actually built for Joanna in the lead role, not for me.”

Chip said it was at that moment he decided he would take on the supporting role in their working relationship, cheering on the love of his life.

“Any fantasy I’d concocted about my own future paled in comparison to the potential I was seeing in Jo,” he continued. “You see, something is built into the fabric of Joanna’s being that is quietly compelling and meant to be shared with the world. She’s a visionary. She’s captivating. Even though it may not resemble what I thought those qualities were supposed to look like.”

He added, “The role I thought I was born to play ended up not being the one intended for me. Instead, I’ve accepted my supporting role, a role I’m actually honored to play. And I gotta tell you, it’s been the absolute joy of my life!”