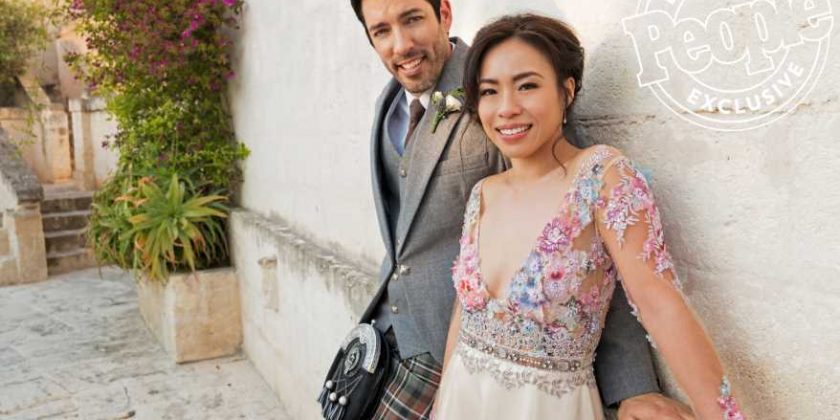 Drew Scott and Linda Phan have been married for one year! And they’re gushing over each other on their anniversary.

To mark their first year of marriage on Saturday, May 4, the Property Brothers star shared three photos of himself and his wife, including one from their wedding day, in which he sported a kilt and she wore the floral gown she walked down the aisle in during their Italian nuptials.

“How is it that time flies so fast when you’re in love? Today is Linda and my first anniversary!” Scott wrote alongside the gallery. “Linda, thank you for joining me on this life long adventure. Let’s keep laughing and dancing even when we are old and wrinkled❤️❤️❤️ #maythe4thbewithyou”

Phan returned the sweet sentiment in the comments of the post, writing “Love yoooooou soooooooo mucchhhhhhhhhhh.”

Phan also posted two tributes to her husband, including one image of a vase of flowers and a poem that Scott wrote for her, which was signed “For Lindy, Love Drew.”

In the comments, Scott wrote, “You find beauty in everything.”

She also posted another sweet photo of herself with Scott, in which they are sitting on a boat, that appears to be from Drew and twin Jonathan’s recent 41st birthday party in Cabo San Lucas, Mexico.

“The first song you sang to me, I’m on a Boat, was probably the first time I fell in love with you,” Phan captioned the image. “The first of many times. Happy 1st to my one and only!”

Though the pair have only been married a year, they’ve been dating for almost a decade and are already planning for their future.

In January, Scott hinted at his plans to start a family with Phan by commenting on one of Joanna Gaines‘s Instagram posts with her six-month-old son Crew, in which she wrote that she thought that it was “time for the next size up” and hinted that her son was growing out of his clothing.

“We’ll be having kids soon so I’ll hit you up for hand-me-downs,” Drew wrote on Gaines’s photo.

In October, Drew opened up to PEOPLE about his plans to become a father while speaking to PEOPLE Now about his children’s book alongside Jonathan.

Drew revealed he is “excited to have kids.”

“I have to talk to Linda about that,” he added. “We look forward to having kids. No screaming rush. We have nieces and nephews that we get a lot of our playtime with, so for now we can get them hopped up on sugar and then pass them back to the parents.”