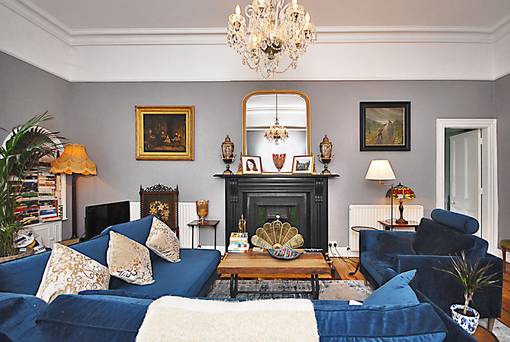 When she first moved in, the owner of No 2 Westbourne House in Dublin 6W was told by her neighbours that her home, dating from the very early 1800s, was the very oldest in Terenure.

While establishing true proof of this claim would require the submission of deeds from all of the parish’s most senior abodes, the assertion might indeed have an anchor in fact.

Because despite being seen today as one of Dublin’s older suburbs, Terenure was sparsely populated right up until the late 1800s. A 17th century census has just 32 people living in the whole area, mostly at Terenure Castle and with one house doubling as a mill.

Indeed Terenure Castle, which was the establishing kernel of modern settlement, doesn’t exist today. Nearby Rathfarnham Castle which is Elizabethan in origin and still stands proud just up the road, isn’t technically a house, no one lives there today and it stands just over the parish boundary in Rathfarnham. So it’s not at the races either. King John handed over Terenure and its lands to Sir Hugo Barenwell in 1215. The Barenwells, who arrived in Britain alongside William the Conquerer, and then to Ireland with Strongbow, ensconced themselves in Terenure Castle until Cromwell kicked them out. Following the Restoration, Charles II gave it to Talbot, the Earl Tyrconnell who sold the castle to Joseph Deane, ironically, a Cromwellian soldier himself. In turn it was sold to Grenderic Bourne in 1806. It was around this time that the first development of homes was constructed. A completely circular array of farm labourers’ cottages changed the name of the area to Roundtown and it remained so from 1801 to when it reverted back again to Terenure in 1874.

A survey of Roundtown in 1837 lists 19 big estate houses on the lands and among them is Westbourne, then occupied by one Mr T Dickson Esq. Most of the other great houses listed were demolished in the 20th century for development while cuts off their lands had earlier provided for the development of the Victorian homes that dominate the area today. So while it is unlikely that Westbourne was among the very first homes built, it might well be the oldest left standing.

In a past life, Westbourne House was a pleasant and comfortable country residence on its own significant grounds and it directly overlooked the River Dodder.

For many years, it was the home of Frederick Franklin, an architect and surveyor for the Board of Works. When Frederick died in 1905, his obituary described him as “a kindly, pleasant, courteous old gentleman”, and no doubt the agreeable surroundings of Westbourne House were conducive to maintaining that good humour.

But the bucolic surrounds Fred knew have changed utterly since his time. The house now faces directly on to the relatively new street that is Westbourne Road, off Rathfarnham Road in Dublin 6W, developed just over 20 years ago. More recently, houses have been built across the street, blocking its view of the river. Westbourne itself has been divided into two separate properties, again about 20 years ago.

The old gate lodge that was built to stand sentinel over its grand entrance on Rathfarnham Road is now in self contained grounds and Westbourne is now entranced directly further down on Westbbourne Road. It had previously been offered for sale since 2015 for €495k. The current owner bought it just over a year ago and embarked on a top to toe refurbishment project that has only recently been completed. Those who would like to compare the difference can still see the “before” pictures online along with the details of the previous sales brochure. The owner prior had already had the house rewired.

Now it’s back to market again refurbished with a tag of €650k attached through agent Geraldine Geary who is very familiar with this property.

A new heating system was installed along with a new radiators and a new top-end German-made boiler. The floors were stripped, sanded and varnished. The property was painted externally and internally and landscaped professionally.

The current owner also went shopping for suitable antique furnishing to suit its age and dimensions, for which they are willing to negotiate for if a buyer is interested.

Athough No 2 Westbourne House is described as a two-bedroom townhouse it’s a generous enough size at 1,200 sq ft (slightly larger than the average three-bed family semi). Importantly for a house of its age, it still has its period features intact including 12ft-high ceilings with coving, sash windows with shutters, the original handmade staircase, its wide plank wooden floors and a basement.

The main room on the ground floor is a dual-aspect living room measuring 25ft by 14ft, with the original ornate black marble fireplace.

Off this room is the kitchen and dining room, which measures 13ft by 12ft. There’s a flight of stairs here leading down to the basement, which is currently in use as a an office and study. There’s also a guest toilet off the hallway.

The first floor has the two bedrooms, one ensuite, as well as the main bathroom, and the property comes with one designated parking space.

While there is no garden to speak of the current owner has looked at the prospect of installing a roof garden on the railed area of the flat roof on the single-storey portion of the building. However, this may require the use of frosted glazing or another shielding barrier for planning permission to ensure that neighbouring properties are not overlooked.

Terenure has been revived since the upturn. The former stone tram buildings that once housed the “end of the line” for Dublin’s south city transport has been converted tastefully into a rather large Aldi. Meanwhile, Lidl is on the main road nearby and there’s Supervalu in Rathgar and a Tesco in Rathfarnham. Bushy Park and the nearby Dodder Linear Park provide miles of outdoor walking space and this location is also spoiled for schools. As well as a Loreto, there’s Terenure College, Stratford and High School at Rathgar; St Mary’s and St Louis in Rathmines and Gonzaga and Alexandria within cycling distance at nearby Milltown.

Within walking distance too is increasingly trendy Rathmines with the refurbished vintage 1923 Stella Cinema, cocktail bar and adjoining diner. There’s a new Fallon & Byrne in the Swan Centre along with a big Dunnes and a Tiger. The Swan also has a multiplex cinema.

Having completed the restoration, the vendor is planning to head off to Victorian Ballsbridge where the opportunity to acquire a somewhat younger residence has emerged.