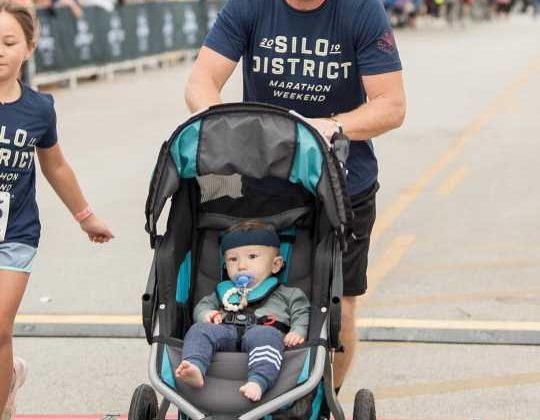 Chip Gaines may have just finished his second long-distance race, but he hasn’t always been in the best shape of his life.

In a personal essay published in the summer issue of his and wife Joanna’s magazine, Magnolia Journal, the former Fixer Upper star reveals what inspired him to transform himself from “couch potato to marathoner.” (Magnolia Journal is published by Meredith, the parent company of PEOPLE.)

The idea for the Silo District Marathon came when Chip met a woman named Gabriele (Gabe) who was running in Central Park with her partner Justin while visiting New York City for his Capital Gaines book tour.

“I’d always been intrigued by runners, especially ones like this couple who made it look so easy,” Gaines writes. “In that moment, I thought about my own list of dreams — including the part of me that’s always wondered if I could ever run 26.2 miles (aka a marathon).”

He explains that he attempted to strike up a conversation with the couple, asking them “how long it would take for an out-of-shape guy like me to train for a marathon.” The couple were happy to chat and Gabe told Chip he could be a qualified runner in about 4 months.

Eventually, Gaines learned that Gabe also has a rare cancer called cystic carcinoma and had started a foundation called Brave Like Gabe with a mission to support rare cancer research and “empower cancer survivors through physical activity.”

Meeting her “felt like a call to action,” which is how he got the idea for the Silo District Marathon, now in its second year. However, the dad-of-five had a few hoops to jump through before he could start his own marathon, much less run one.

“I hadn’t worked out in about a decade, and I was easily 20 pounds overweight,” Gaines writes. “That’s not really the ideal starting place for a budding marathoner. But what I did know felt bigger than all of the very good reasons I wasn’t qualified. I knew I wanted to be a part of the work Gabe was doing, so I could either get off the couch and jump in with both feet or sit there comfortably and play spectator to this opportunity as it passed me by.” Gabe even agreed to coach him on his journey.

Soon, Gaines says, he actually enjoyed running and even found himself looking forward to his long distance training. However, about two months in, he suffered another setback: tendonitis in his ankle. His doctor recommended that he give up on the marathon and run the 5k instead for fear of injuring himself further.

“But I’m just not built that way,” he writes. “I committed to the marathon and I was resolved to run the distance I’d set out to accomplish.”

He remembers having to come to terms with the fact that he might not cross the finish line, as his longest training distance would have to be 15 miles — 11.2 miles less than a full marathon distance.

“This injury shook my confidence,” he writes. But he powered through, not only for himself, but for Gabe and her foundation, because nearly 6,000 runners had signed up to compete after hearing Gaines was running.

“I decided that I’d put too much emotional and physical energy into training and hosting this race to let this setback derail my goal,” he says. “Even if the reality was that I ultimately would not be able to complete the race, I was gonna give it everything I had.”

And he did just that (while wearing a toolbelt!). He writes that after five and a half hours, he crossed the finish line with his then 8-year-old daughter Emmie Kay.

“In that moment I’ll bet I would have looked like the epitome of success — wearing a big ol’ grin and a shiny new medal,” he writes. “But had you seen what I looked like at mile 9 or mile 15 when I could barely walk, when my feet felt as if they were going to explode.”

“Or maybe around mile 21 when Jo had to get me some pickle juice to help ease my leg cramps just so I could make it to the next water station. See, failure was every bit a part of the journey.”

This year, Chip opted for the half marathon, and ran 13.1 miles. When he crossed the finish line, he was pushing his 10-month-old son Crew in a stroller as his 11-year-old daughter Ella ran beside them. Joanna, of course, cheered on her family and gave out high fives to people along the course.

RELATED: What Will Happen to DIY Network Shows When It Becomes Chip and Joanna Gaines’s New Channel?

“We are so thankful for and blown away by each and every runner who participated in this year’s #silodistrictmarathon,” Joanna wrote alongside a series of images of her family from the event on Instagram. “Watching the grit, the fight, and the spirit of these runners left me speechless. So many of you would tell me who you were running in honor of and I was literally teary eyed the entire time.”