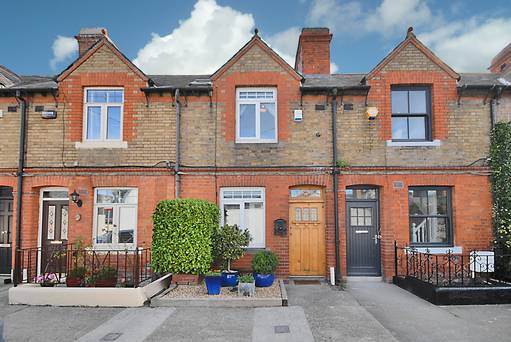 Cottages are eternally romantic, particularly when they are characterful period homes in a scheme which overlooks a river filled with wildlife.

Like the Dodder, which flows from Ringsend, through Ballsbridge, Clonskeagh, Milltown, Rathgar, Terenure, Rathfarnham, Templeogue and Tallaght, and also provides south Dublin with a miles-long riverside park.

But it’s stating the obvious to assert that the big challenge for newcomers to cottage living is how they deal with the typically diminutive internal dimensions. It helps a lot when that space has already been maximised for you.

No29 Dodder View is one of a cluster of workman’s cottages constructed in 1912 beside the river at Ballsbridge in Dublin 4 and deploying the famed expert craftsmanship of that era. The decoratively combined yellow and red brick in the bright frontages and the higher ceilings provided by the original builders indicate that these would have been regarded as a more expensive and higher standard of workman’s cottage back in the day. The typical cottage space issue is lessened considerably, first by the fact that they were also built as two-storey homes, rather than the more typical single-storey terrace dwellings we see more commonly in estate workers’ homes provided in D4 and elsewhere by the Pembroke Estate. In essence, they are more the equivalent to the typical two up, two down home of the period.

And in the case of No29, a clever revamp has also succeeded in turning typical passage or transient spaces into active living areas, thus further providing for a home which absolutely maximises all its dimensions for modern living.

For example, take the upstairs. What was formerly a more tightly-fitted three-bedroom arrangement with all three interlinked has been turned into an airy two-bed by virtue of transforming a middle room space into a walk-in wardrobe for both rooms, as well as a shared study area. The impact means no need for a wasted landing space and less space stress in the bedrooms themselves where wardrobes are no longer a necessity.

On the same floor, a bathroom ensuite off the master bedroom now doubles as an access area to an outdoor roof terrace balcony area which utilises the top of the downstairs extension.

The use of the bathroom also as a passage space to get to the terrace, while unusual, has once again completely maximised the active living area in this part of the house.

It shows too that flat extension roofs, so rarely utilised in Irish homes, offer great scope for an additional usable outdoor space when reinforced correctly to take the weight of a few people, a suitable rail barrier and a set of table and chairs. Downstairs the front door leads into a very small draught excluding hall space and then straight into the open plan sitting room and then into the kitchen and dining area.

With wide set double doors in situ, the two can either be left as a flowing open space or else separated for privacy in either. And with the stairs running straight up the living room wall, not an inch of this 803 sq ft home is wasted.

The interior downstairs is wholly modern. The living room has a porcelain tiled floor and a recessed and raised fireplace.

The double doors lead through to the kitchen and dining room which also has a tiled floor and comes with an array of wall and floor units with a tiled splashback.

Downstairs has a bathroom at the furthest end of the house with a bath tub, shower, wc and wash hand basin and a lobby space beside it leads out to a small outdoor courtyard.

The master bedroom upstairs has double doors through to the study with its dark timber polished floor. The ensuite has its own shower cubicle.

Bedroom two, which also has access to the study and changing room, has its original period cast iron fireplace intact and is also floored in solid wood.

The house is located within the leafy Embassy Belt and in Ireland’s most expensive and prestigious postcode district.

It is also set within a stone’s throw of a range of amenities such as the RDS, the Aviva Stadium as well as the shops, restaurants and bars of Ballsbridge. The house is located a half hour’s walk from Grafton Street.

The DART is also close at hand if you fancy travelling in the other direction to the seaside at Blackrock, Dun Laoghaire and Dalkey/Killiney.

Heating is gas fired and parking is on the street.

No29 Dodder View Cottages is for sale through agent Geraldine Keary, who is seeking offers in the order of €575,000.