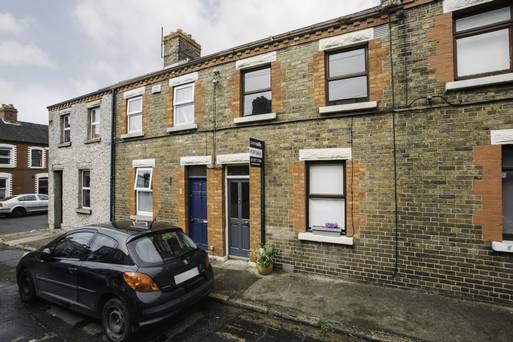 Breda McEnaney bought her townhouse at South Dock Place in Ringsend back in 2004, when she was working in Herbert Place, a short walk away.

“I absolutely loved living there,” she says. “It took me seven or eight minutes to get to work, along the canal, and I was right in the thick of things, it was so close to everything.

“Many of the families in the area have been there for years – they used to watch out for me as a single girl when I lived there on my own. I still love it around there; it has a great energy about it and a lovely mix of older Dubs and the new Google types.”

The small two-up two-down townhouse had already been extended into the yard by previous owners, so Breda gutted the existing house, went up into the attic, and re-wired, re-plumbed and put in a new central heating system. The result is a properly bijou house in the heart of the docklands, within walking distance of the city centre and the Dart station at Grand Canal Dock, a couple of minutes’ away.

On the ground floor, there’s a tiled entrance hall with the living/dining room to the right and the stairs to the first floor straight ahead. A compact, yet fully-functional kitchen lies behind the dining area, with a small shower room and loo behind again. There is a tiny yard outside.

Upstairs on the first floor are two double bedrooms with built-in wardrobes, and up again is the converted attic, suitable for a variety of uses including a decent-sized home office, but currently laid out as an additional bedroom. The 63sqm of living space does not include this attic space. “I wanted to paint the sitting room and kitchen in Farrow & Ball Downpipe – a dark grey – even though the spaces are quite small. The painter, who was a friend, thought it was a mistake, but I eventually persuaded him over a couple of pints in Slattery’s pub.”

Breda was right – the colour looks chic and has stood the test of time. Elsewhere she used another Farrow & Ball shade, this time the more neutral Elephants’ Breath, with the bedrooms upstairs painted an uncontentious shade of soft white.

After several happy years at South Dock Place on her own, Breda met her husband in 2008 and he moved in the following year. The couple relocated to France in 2014 and Breda rented the house to her nephews for a few years. “When they left, friends suggested that I give Airbnb a go,” she says. “To be honest I knew what it was but had no sense of the monster machine that it is. I put up some photos and listed it just before I was going to bed one evening, and the next morning I woke up to 20 messages from people who were interested in booking it!

“It was booked out for the whole summer that year. This summer started a little slower until I put the WiFi in – I’d been holding off – and suddenly it was sold out overnight. I almost couldn’t cope with the demand. To make it more manageable, I have a three-night minimum-stay policy.

“It’s very popular with families with children, because it sleeps six and makes for a very affordable holiday in Dublin. The families who have rented it have really appreciated the playground which the house backs on to, and certainly all the children in the area get plenty of use from it and the adjoining basketball court.

“I made good money from Airbnb, but it’s not without its challenges in terms of maintenance and turning it over between guests, particularly when you live abroad.”

Breda says when she first moved in, Slattery’s pub was the centre of the universe for her and her friends. “Slats was the hub of the area. And then the crash came and we all started socialising en masse in coffee shops rather than pubs; we congregated in Food Game, which has always served the best coffee in the area. It’s a great place.”

“The area has come on since I bought,” says Breda, “and we have a really great food shop now in Lotts & Co, where they make great sandwiches and you can pick up every ingredient you might ever need.”

Now that Breda and her husband are living full-time in Paris she is selling the house ”very reluctantly’ ‘. “I hope that somebody else will be as happy there as I was,” she says.