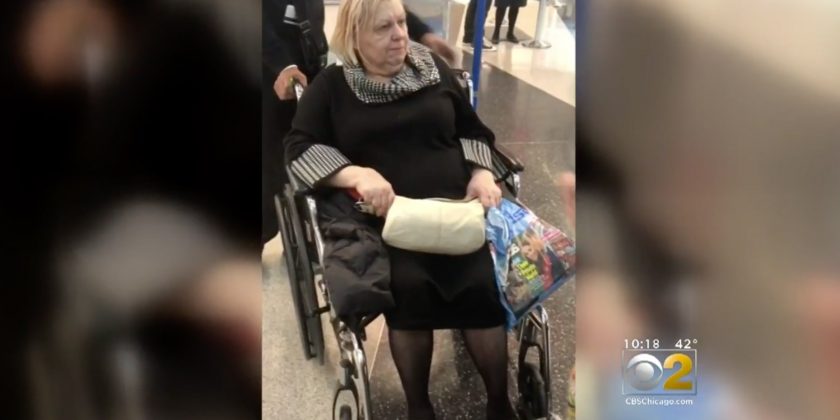 American Airlines claims it has video footage proving a passenger was not abandoned in her wheelchair overnight after her flight was canceled, as the woman’s family previously claimed.

Olimpia Warsaw, 67, who is a wheelchair user, flew to Chicago for her ex-husband’s funeral, and on her way back home to Detroit on Nov. 30, she was assigned a porter to assist her with luggage and transportation to the airport.

Her son, Claude Coltea, told CBS Chicago that her flight out of O’Hare was canceled and the airline offered her a hotel room, but didn’t offer to take her to the hotel and she was unable to find her own transportation there because she has trouble communicating. According to the her son, Warsaw has Parkinson’s disease, diabetes, and struggles to walk.

Coltea claims the porter who was assigned to help her said his shift was over, so he left her at the airport. He also told news outlets that it was only when Warsaw didn’t arrive home in Detroit as scheduled that her family began calling American Airlines, and security was able to help the family locate her hours later.

RELATED: Southwest Apologizes to Mom After Gate Agent Mocked Daughter’s Name: ‘Not Everybody Is Nice’

After previously stating that they were investigating the situation, on Tuesday, American Airlines made public a very different version of events.

After reviewing CCTV footage from the airport, call records from the wheelchair attendants’ phone and airline reservations’ call records they claim Warsaw was not left overnight. According to these time-stamped systems, American says, approximately 45 minutes elapsed between the time the wheelchair attendant departed and someone came to pick up the passenger, and the family was already in touch with the airline during that time.

“We launched an investigation with our Chicago team and the vendor we utilize that provides wheelchair services at O’Hare,” a spokesperson for the airline tells PEOPLE in a statement. “After a review of closed-circuit television, Ms. Warsaw was dropped off in the terminal at 12:30 a.m. CT on Dec. 1, and a family member arrived at the airport to pick her up at 1:13 a.m. CT.”

American provided a minute-to-minute log of the events of the evening, detailed below. They have not released the footage.

WATCH THIS: Post Malone ‘Can’t Believe How Many People Wished Death on Me’ After His Plane Lands Safely

At 12:32 a.m., the video shows Warsaw using her walker to go outside to smoke a cigarette for seven minutes before returning inside, and she repeats this activity once more after family members arrived to pick her up.

At 1:13 a.m., CCTV footage shows relatives arriving at the airport to pick Warsaw up. At 1:48 a.m., a female relative stopped to take a photo of Warsaw in her wheelchair before finding a Chicago Police Department officer at the airport. At 1:53 a.m., they all left the airport.

In speaking with CBS Chicago following the incident, Coltea said his family was disappointed with the way the situation was handled.

“All we wanted was someone to pause and say, ‘You know what, can we just make sure this human being is safe and then we can all go home?’” Coltea said. “Not one person did that.”

In a Skype interview with the outlet, Coltea said a porter “left her there. She was crying, and she was scared.”

At the time, the airline apologized to the family and launched an investigation into the porter, who is not an employee of American Airlines.

A spokesperson for American Airlines previously told PEOPLE in a statement they were “deeply concerned about what occurred Friday evening at Chicago O’Hare.”

“This is not the level of service we aspire to provide to our customers, and we apologize to Ms. Warsaw and her family for letting them down,” the spokesperson said. “We have launched an investigation with our Chicago team and the vendor we utilize that provides wheelchair services at O’Hare. While this investigation is still underway, we are already developing a process with our vendor to ensure this does not happen again.”

“Our customer relations team has spoken with the family multiple times, and other team members met with the family in Chicago and Detroit on Saturday,” the representative added. “American has also refunded the ticket.”