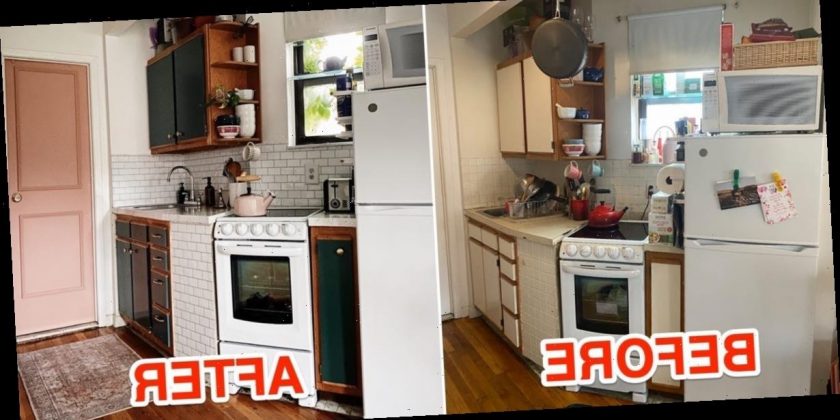 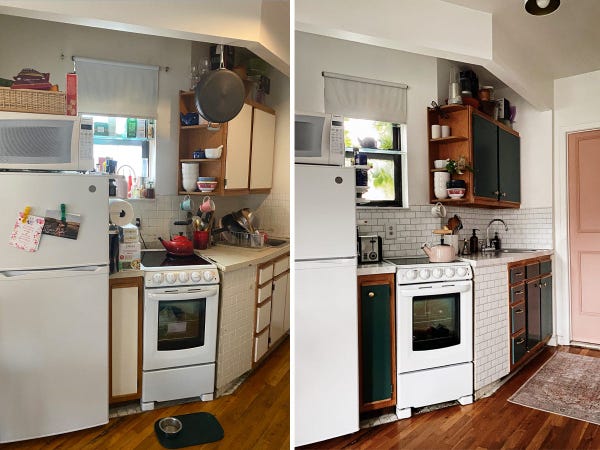 Lisa Lu has lived in her studio apartment in New York City since 2012. 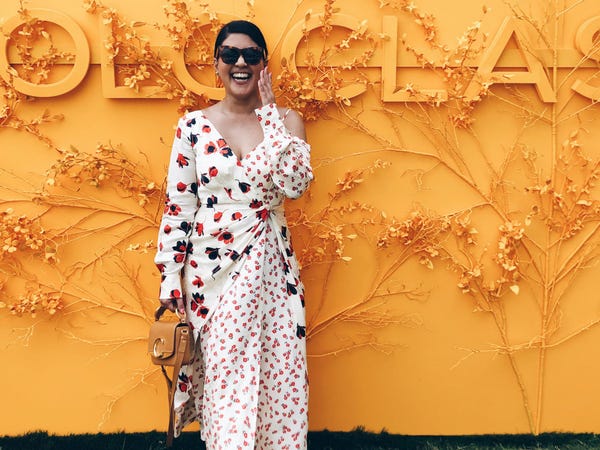 Lu, the director of PR and events at Bergdorf Goodman, shares the 350-square-foot space with her dog, Stella.

Although she's lived in the same apartment for eight years, Lu didn't think about renovating it until she started spending more time at home as a result of the coronavirus pandemic.

"On a typical, non-pandemic day, I'm usually popping in and out of my apartment," Lu told Insider. "I more or less viewed my apartment as a place to lay my head down at night."

"While I had put effort into styling the main spaces of my studio, the kitchen and bathroom, though unsightly, could be tolerated," Lu said. 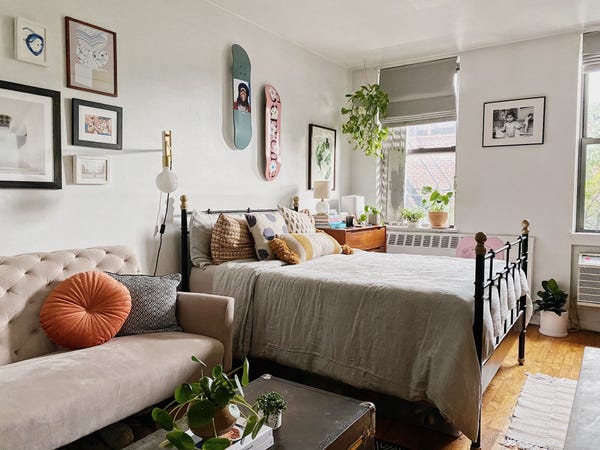 "When the city went into lockdown, and I found myself having to stare at my kitchen all day, I decided it was time for a change," she said.

Lu wanted the kitchen to be cohesive with the rest of the apartment, which she said doesn't really have a singular style. She described her space to Insider as "modern, feminine, and Cali-cool."

Lu started her renovation with the kitchen, but she had to be thoughtful about the changes she made since she doesn't own her studio. 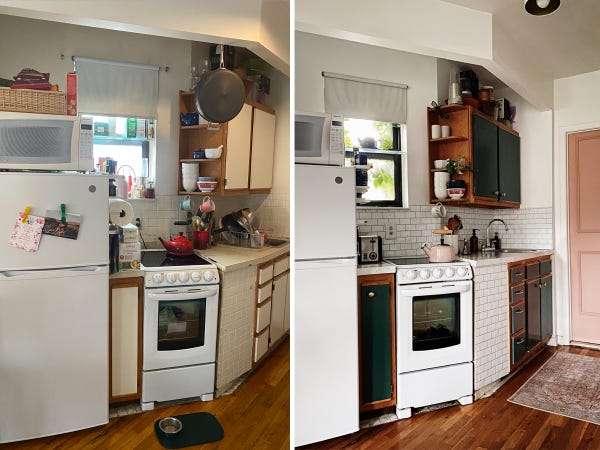 "I had to be able to reverse any changes I made since this is a rental," she said. "I think some people feel like this is more trouble than it's worth, so they don't bother. But for me, it was important to create a space that feels very personal to me." 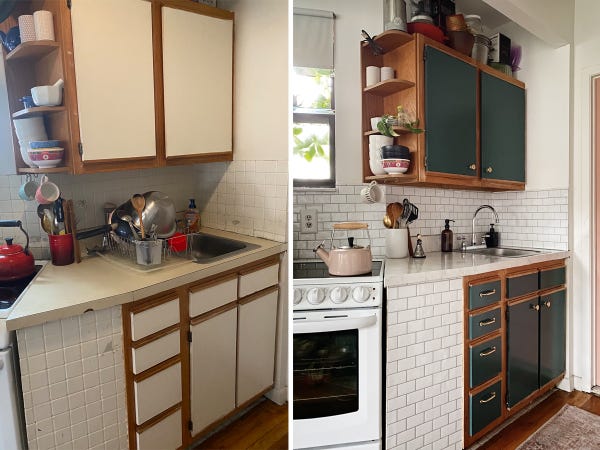 "I wanted to paint the wood base of my kitchen cabinets, but that was something I wouldn't be able to undo," Lu told Insider. "If I had my way, I would have scrapped the cabinets on the wall altogether and replaced them with open shelving."

Instead, she used paint to transform the space. Lu painted the cabinets a dark blue-green and put brass hardware on top of them. She used contact paper and peel-and-stick subway tile to transform the countertops and walls, giving the space a fresh feel.

The dark cabinetry contrasts with the white counters, bringing a modern look to the space. Pops of pink make the kitchen even more inviting.

The brass hardware is actually a permanent change to the kitchen. 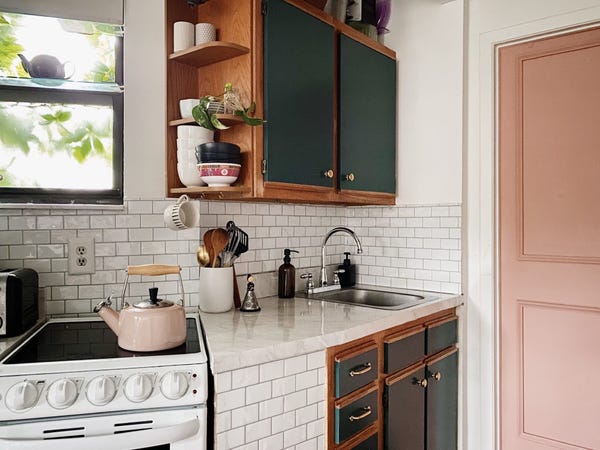 "I'm crossing my fingers that everyone will agree it's an improvement — not necessarily a tactic I recommend for everyone," Lu said. "You might also have to be OK with letting go of a piece of your security deposit if it comes down to it."

Lu also told Insider that covering the counters in contact paper was the most difficult part of the renovation.

"Every blogger and YouTuber makes it look and sound so easy, but I found it extremely difficult to prevent air bubbles, even with the right tools," she said. "Eventually I just had to be OK with the slight imperfections. It was still an improvement over the original counters."

After she finished the changes in the kitchen, Lu decided to update the bathroom. 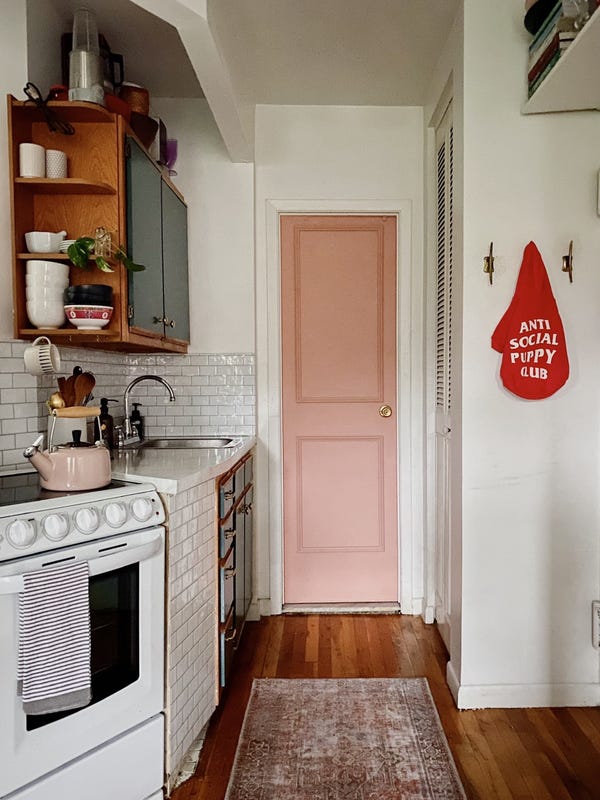 Lu painted the bathroom door pink, which brightened both the kitchen and bathroom.

The molding on the door isn't part of its original structure, either. It's actually an adhesive molding Lu found on Etsy.

"That made a huge difference and gives it a more distinctive look," she said of the addition.

Lu painted the bathroom as well. 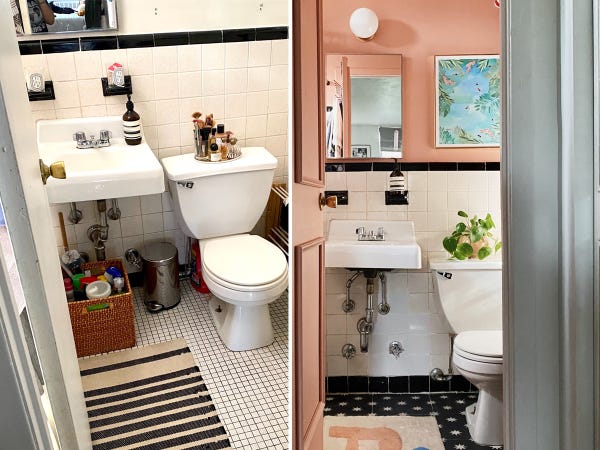 She painted the walls, door, and shelving in the same pink color for what she calls a "seamless look."

Lu also replaced the light fixtures on the ceiling and above the mirror with more modern pieces.

The light above the sink was a bit harder to replace, as it was permanently affixed to the wall. Lu used a glass, globe shade to cover it and antique gold wax to give the base a face-lift.

Lu couldn't remove the floor tiles, but she could cover them up. 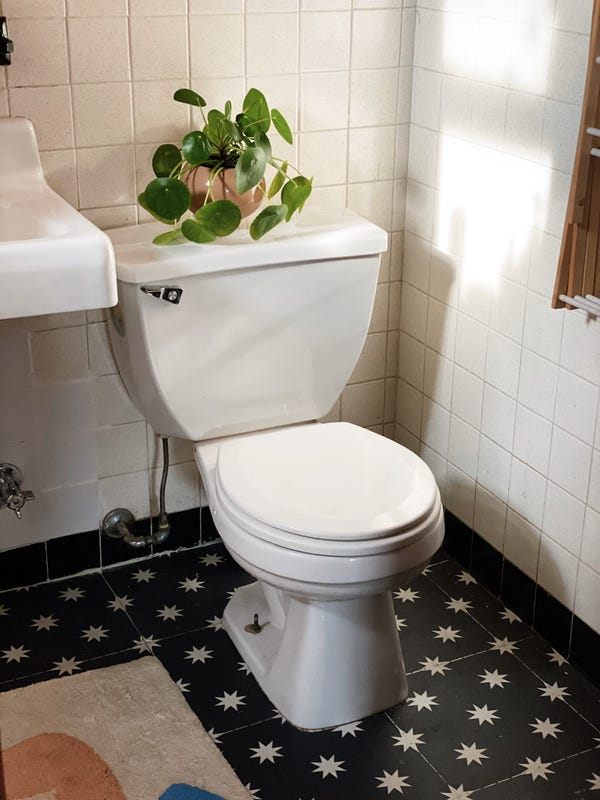 She placed a black tile decal with a Moroccan star pattern from Etsy on top of the original flooring. "I love the dramatic result," she said of the floor.

She also added small details, like a new shower curtain and rug, to make the bathroom look more cohesive.

Lu told Insider the bathroom is actually her favorite space in her home. "It's so bold in its femininity," she said. "Is it weird to want to spend all of my time in the bathroom now?"

Lu also decided to give her dining space a refresh. 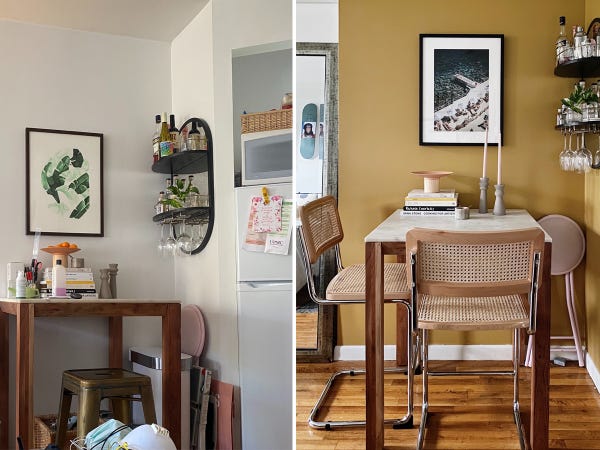 "On a whim, I decided to paint my dining nook a deep mustard color," she said.

The color gives the area a chic feel, and the design appears more intentional.

New seating and a print complete the space. 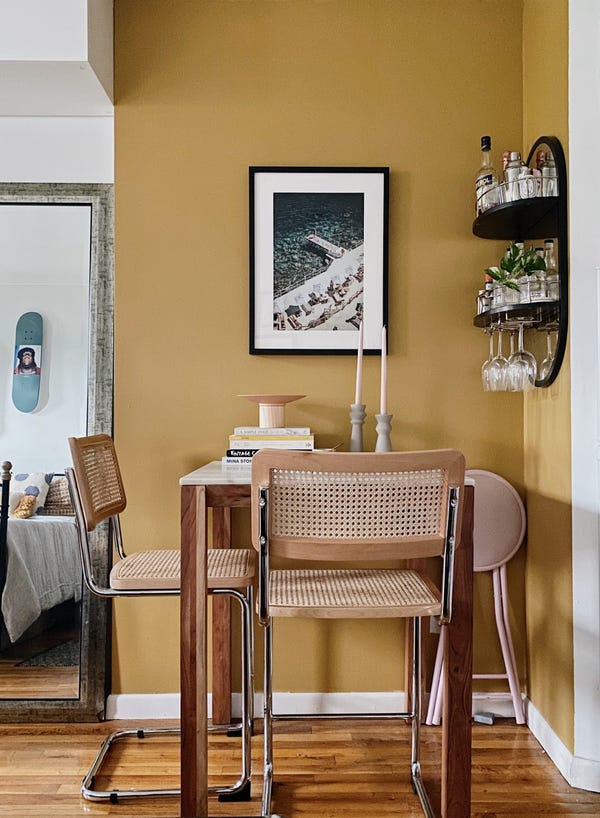 The statement print and cantilever cane stools completed the area.

Lu told Insider the renovation only cost about $1,500 in total. 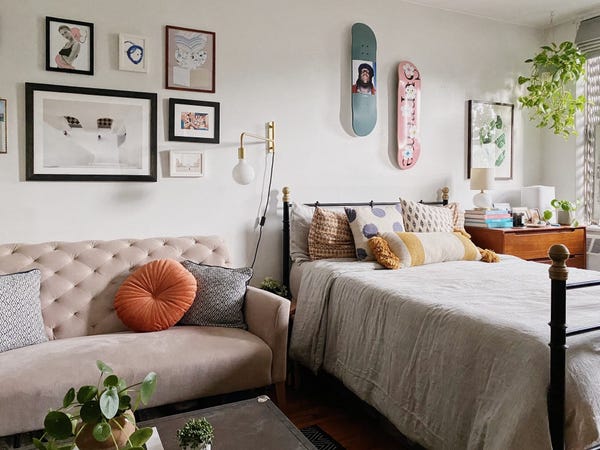 "Some may not consider that a steal, but this includes all of the upgrades to hardware and fixtures, as well as the new stools," Lu said.

She was also able to complete the renovations in just two weeks.

Lu was surprised by how much she enjoyed renovating her space. 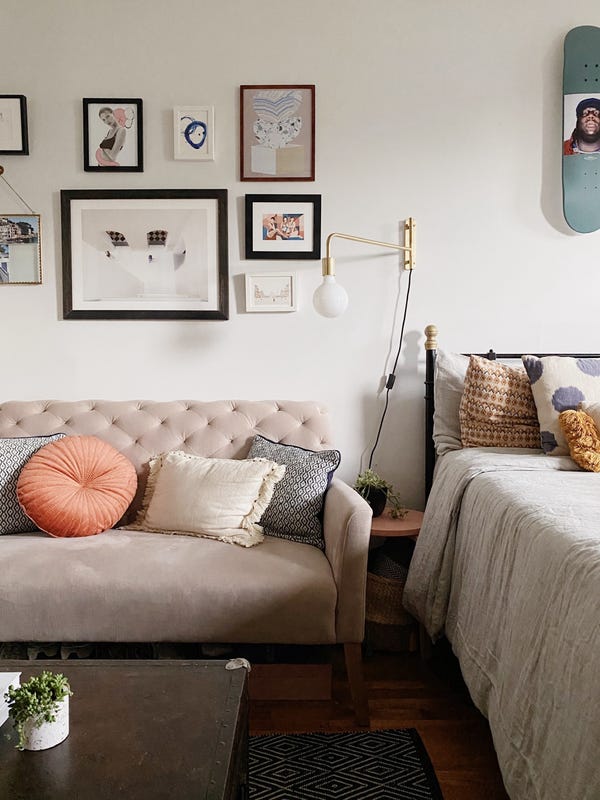 "I'd definitely been a 'hire a TaskRabbit' kind of girl up until that point," Lu said, so the new project was a challenge.

"It took a bit of courage to get started, but once I did, I actually found it cathartic and a welcome distraction," she told Insider.

A friend helped Lu with the more intense parts of the renovation. 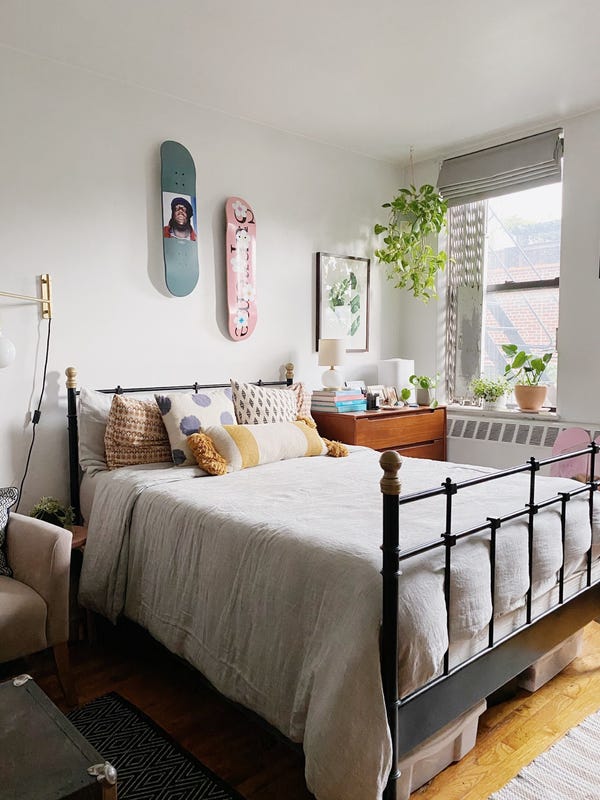 Lu's friend Jason helped her with everything that required power tools. 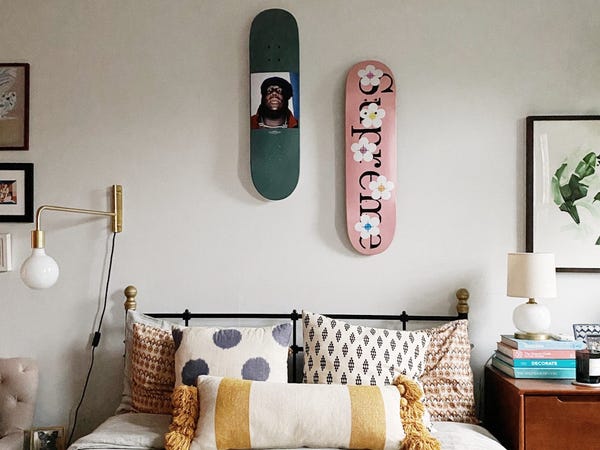 "I think I would want to put my own stamp on any space I move into, and I relish the challenge of doing so in a way that is rental-friendly," she told Insider.

Lu advises people who are starting renovations for the first time to start small. 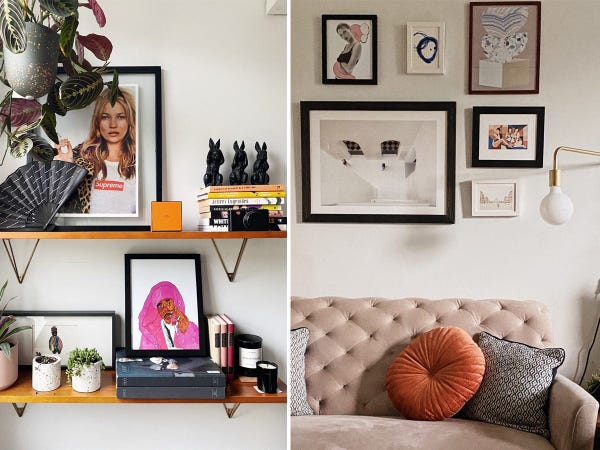 "Pick out the one thing that bothers you most about your space, and research methods and materials to transform it," she said. "Once you do that, I think you'll find that you'll be energized to see what else you can change."