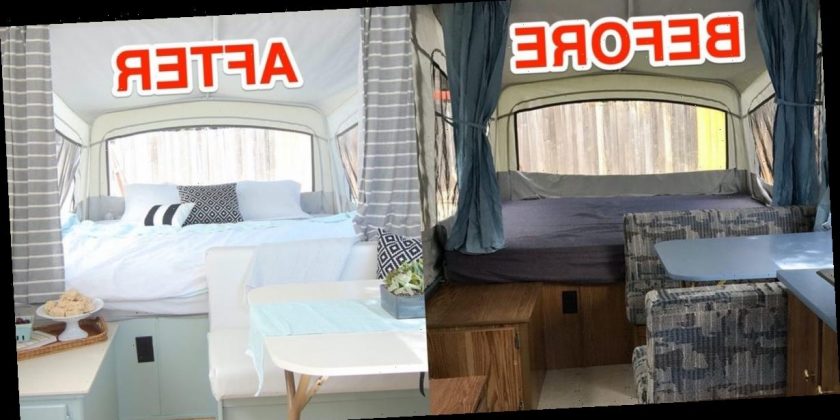 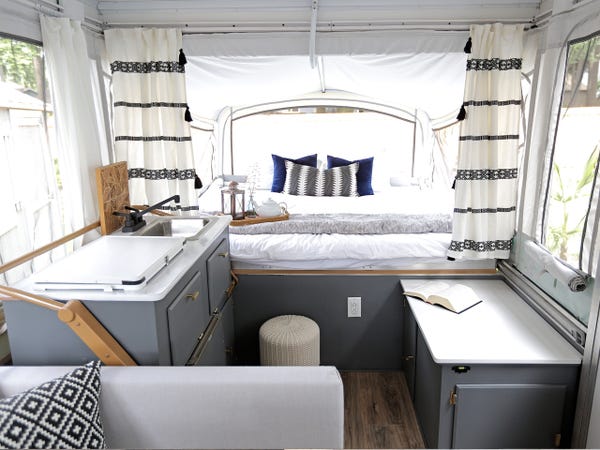 After spending two years painstakingly renovating a home, most people would breathe a sigh of relief at the finish line.

When her and her husband finished renovating their 1970s home outside of Portland, Oregon, which she said was "in terrible shape" when they moved in, she told Insider she was "hungry for more design projects."

The stay-at-home mom of two said she decided to look for the cheapest, most run-down trailer she could find, and got lucky with a 1978 Jayco that cost $400.

"It was super ugly, but it was in great shape," Rice said, adding that she fixed it up in a week and sold it for $1,900, spending less than $200 on the renovations.

"And that's kind of how the whole thing got started," she said. "I just love doing design projects, I wanted to do more and more."

Now, Rice renovates about two tent trailers a year — just for fun. See more of her work below.

When Lisa Rice finished the renovations on her 1970s home near Portland, Oregon, she immediately started looking for a new project. 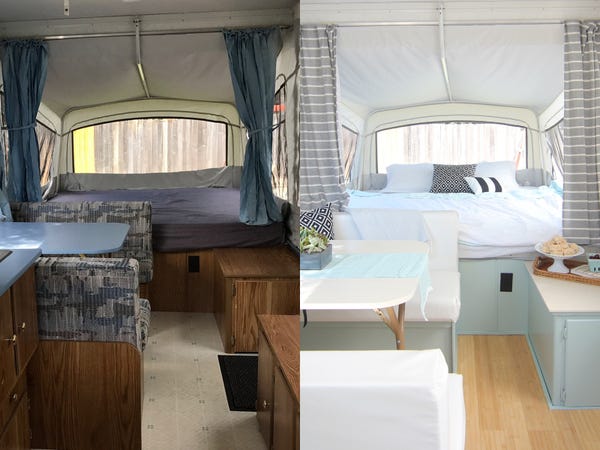 While Rice said she went to school for psychology, she's always been drawn to interior design and had renovated several homes before doing her first trailer. She said that both she and her husband grew up in handy, DIY-prone families and that they just figured out what to do by trial and error. Now, it's become her hobby. 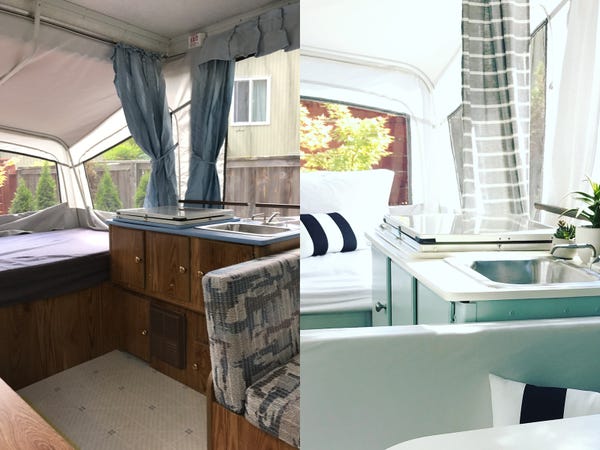 "I'm pretty cheap," she said, adding that she rarely spends more than $200 on a renovation.

One of Rice's top tricks to keep things looking "extra fancy" on a budget is to go mine Craigslist or Facebook for any leftover flooring from a home renovation, since tent trailers don't usually have much floor space.

She also checks out local granite shops because she said they often have small remnant pieces that they'll give out for the price of cutting them to size and finishing off the edges. Rice uses these for the countertops.

Rice likes that tent trailers are basic but functional, and can make you feel like you're camping outside thanks to the screens all around. 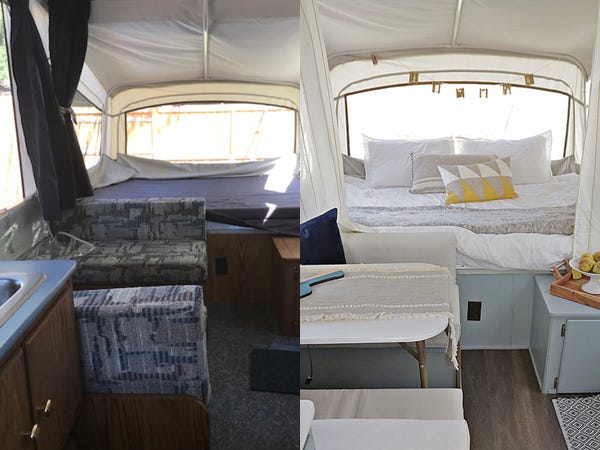 The simple reason Rice renovates tent trailers is that they are light, and just about all her car can tow home.

Usually, tent trailers have a double bed, a dinette that often turns into another bed, a stove, fridge, and sink. Some have toilets and showers, too. Their sizes vary, but they're usually quite compact and easy to store when collapsed, and they pop out to reveal a larger space.

Rice said she loves the feel of a tent trailer because they have screens all around that make it seem like you're outside, which is what most people want from camping trips.

Rice adds that they're easy to store and that they can double as extra office space, a playroom, or a school area for kids.

"If you want to get into RVs, tent trailers are a great way to start," she said, adding that her family had a tent trailer growing up, though most of her childhood camping involved sleeping in a tent.

"I've always loved camping and I love being outside. So [tent trailers] seemed like a good fit," she said. "I always liked the idea of having a bed, something a little nicer than sleeping on the ground."

Rice says her prices vary depending on the year and cost of the trailers when she first bought them. 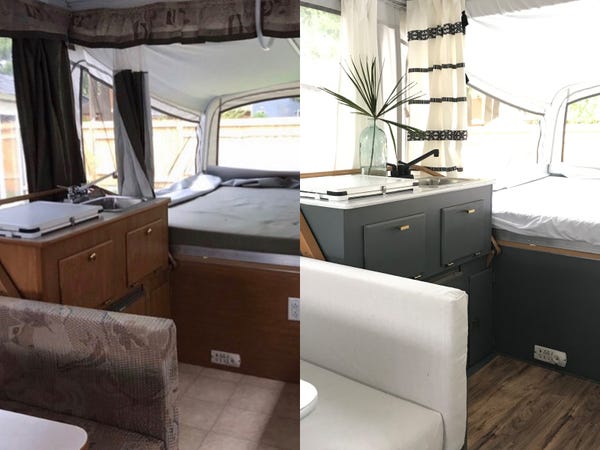 Rice says the older a trailer is, the cheaper she can get it for — which means she can also sell them for less. 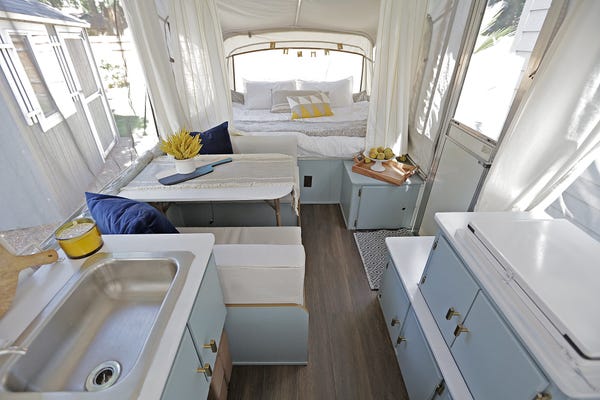 According to Rice, it's always a good sign when trailers are stored in garages. She also makes sure the screens don't have any holes, that there's no water damage anywhere, and that there aren't any funky smells, which she said is often a sign of water damage.

She said she's had good luck finding trailers, but has also said no to a lot of ones she's viewed.

Rice says it usually takes her no more than a week or two to do renovations. 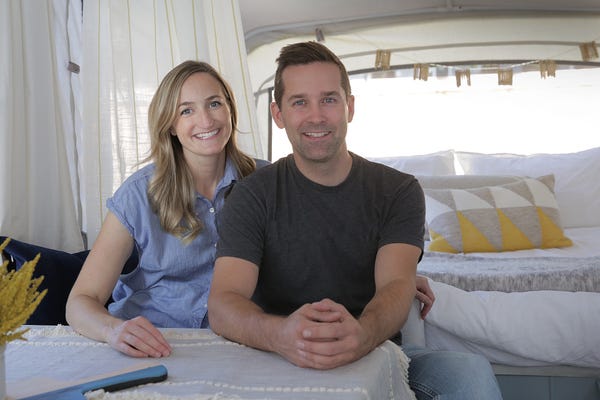 "I can get it done pretty quickly," she said, speaking of renovating a trailer. "If I'm taking my time, I can stretch it out over a couple of weeks, but they're such a small space, they're really doable and easy."

Rice broke down what she does in a typical week for a renovation, as follows:

While she occasionally works with clients, Rice says she prefers to renovate trailers to her own style and sell them on Facebook or Craigslist. 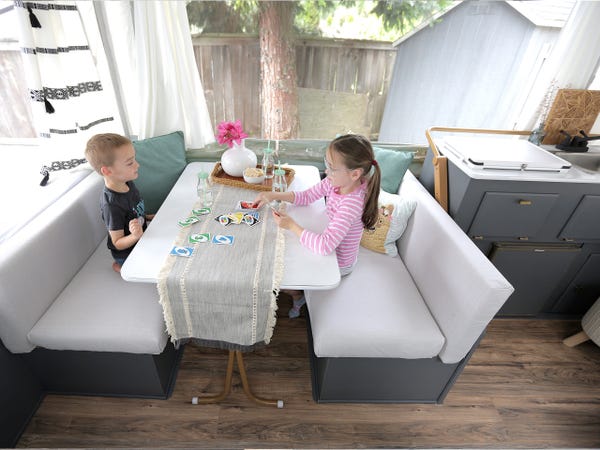 According to Rice, her buyers have been mostly women in their 30s and 40s. She chalks it up to tent trailers being an easy way into RV life.

Rice said she may make her side gig of flipping tent trailers a business in the future. 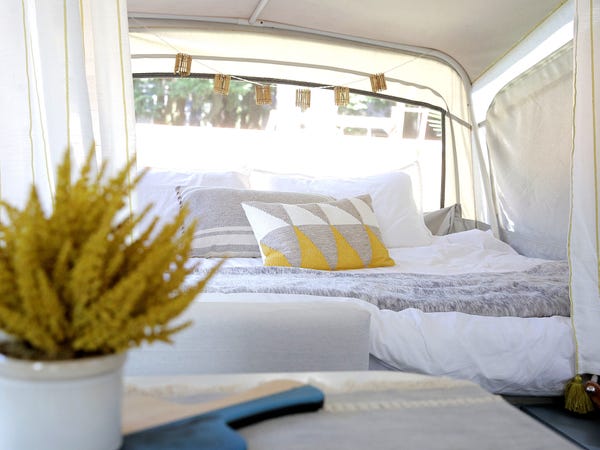 "I love doing trailers. I would love to do it as a job full-time," she said. "I just need a bigger yard!"