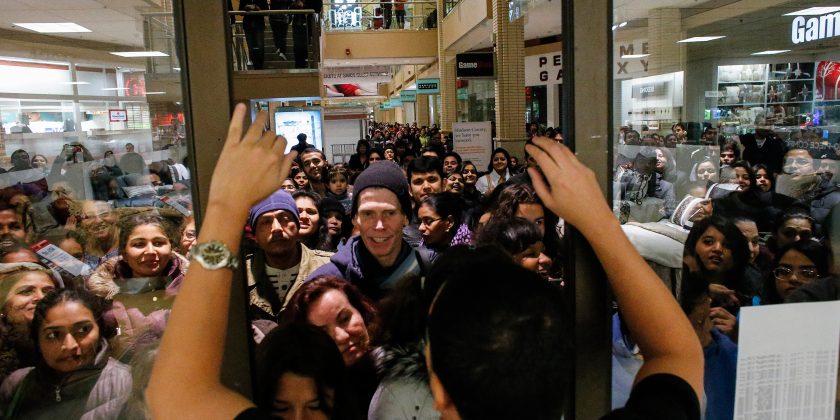 Black Friday is considered the start of the holiday shopping season, but the good cheer that heralds in the holidays can be hard to find amidst all the crowds clamoring for the best deals on everything from bikes to lobster tails.

In case you’re planning to brave the mall this Friday, mentally prepare yourself by reading the stories below, gathered from industry insiders and PEOPLE editors who’ve witnessed Black Friday behavior outrageous enough to surely land some shoppers on Santa’s naughty list. (And if this scares you off, you can see pretty much every Black Friday deal worth shopping online right here.)

1. “I saw an elderly woman steal an ice cream maker out of a man in a wheelchair’s electric cart.”

2. “When I worked at Walmart, we had a fight break out over a bike. Fists were thrown and there was some blood. Eventually, one guy got ahold of it and managed to get away from the crowd. He rode the bike out of the store (without paying).”

3. “Someone punched a security guard in the face because they thought he was a customer skipping to the front of the line. He was just walking in the door to start his shift.”

4. “I watched a woman collapse in hysterics into my manager’s arms because we didn’t have the exact model of cooler she wanted.”

5. “A lady called 911 because we wouldn’t price match with Best Buy. The police came and arrested her for misusing the emergency service.”

6. “When I worked at Sam’s Club, we caught a woman stuffing the inside of her pants with frozen lobster tails. She would unpack them and throw the trash in a stack of tires that were on display nearby.”

9. “There was a sale — $1 for towels or something. This guy jumped into the towel bin and literally growled at anyone who tried to get a towel. He claimed them all.”

10. “Beanie Babies. They would toss the Beanie Babies from a bin on a table. People were vultures after these things. I was about 9 and an old lady grabbed a cat out of my hand. I stomped on her foot and stole it back. I was so proud.”

11. “People had been lining up for at least 10 hours – we had tons of things on sale, and most people were trying to score deals on fancy electronics. Except for the first person in line. Nope, that person waited all that time for the buy-one-get-one candles.”

12. “I worked one Black Friday at the Children’s Place and I saw two ladies get in a physical fight about size 2T jeans. It was the last pair and they were like, $6. Not coincidentally, that was my last retail job.”

13. “I worked in customer service at a grocery store and once had a customer return a fully eaten rotisserie chicken saying they were bringing it back because it was bloody. One look told me and anyone else with eyes that the ‘blood’ was strawberry jam. My manager still made me issue the refund — with a smile, because the customer is always right.”

14. “My first Black Friday, I was working at a Walmart. I was assigned to be one of the employees that would cut open the packages that contained our merchandise. As I readied the box cutter, I got shoved by a customer, and I fell right on it and sliced my hand open.”

15. “I worked in the women’s shoe department at Bloomingdales. On one occasion, after I had placed a pair of beautiful Ferragamo flats at a woman’s feet, she accused me of being racist with how I treated her. She created a huge scene, shouting that I was discriminating against her for how I took the shoes out of the box. It made absolutely no sense. 20 minutes later, a coworker told me that the woman created that entire scene because she wanted a discount on those shoes. And it didn’t work, she got thrown out! Ferragamos are beautiful, but they aren’t worth all of that!”

Some stories have been edited for length and clarity from Reddit.