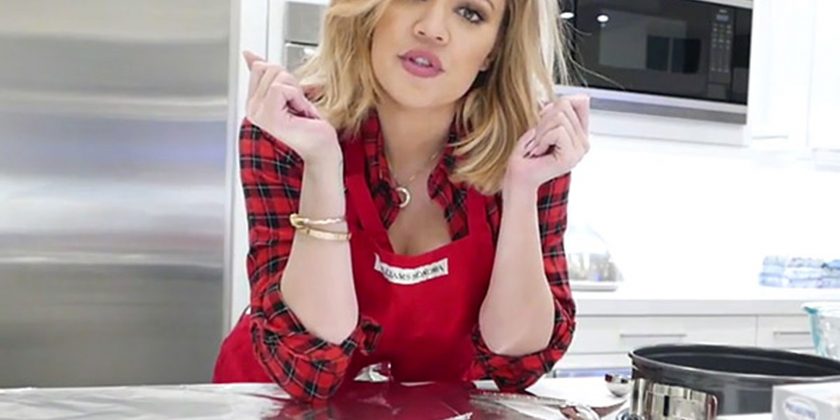 America turns to the Kardashians and Jenners for many things: professional advice, dramatic narratives, fashion inspiration, and general escape from the insufferable banality of our own lives, just to name a few. One too-often overlooked aspect of the reality family’s influence, though, is on our cuisine.

The KarJenner sisters have been outspoken about their cooking and eating habits, with each allowing her unique personality to manifest itself through food. Kourtney: the conscious one; Kim: the indulgent one; Khloè: the inspirational one; Kendall: the back-to-basics one; and Kylie: the creative one.

And then, of course, there’s Kris Jenner, the lifestyle extraordinaire who started it all.

Like with all of our families, at no time is each one’s traits more amplified than during the holidays—and along with their larger-than-life personas, the Kardashians bring a classic spread to the table each year. “We do a very traditional Thanksgiving dinner,” Kris told PEOPLE in 2014. “It’s turkey and dressing, gravy, mashies, veggies and stuffing and, of course, a gazillon desserts.”

From decòr to dessert, here’s everything you need to make an entire Thanksgiving meal in the style of a Kardashian.

To be as prepared as Kris, you must set the table exactly four days in advance. “It takes me that long to get it just right, layer­ing the dif­fer­ent decorations, add­ing and taking away things until I can stand back and say, ‘Yes, that’s it,’” she says.

In a 2010 episode of The Rachael Ray Show, Jenner showed off this “Yes, that’s it” moment, complete with Hermes china.

If Hermes is outside of your family’s budget, Jenner keeps Williams Sonoma turkey plates on hand for what she calls “casual country Thanksgiving.” Also, these turkey napkin rings are adorable and affordable.

When Kylie hosted Thanksgiving last year, she departed from her mother’s more colorful style, opting for white-and-gold color scheme—without sacrificing an ounce of elegance. You can match her look with these gold pumpkins.

RELATED: How to Cook Like a KarJenner: 13 Recipes from the Famous Family

This is actually the most difficult element of the menu to pull off in authentic Kardashian fashion, as very little has been revealed about this aspect of their Thanksgiving over the years.

If you’re willing to stray from tradition while still using the proper poultry, Kourtney has a recipe for turkey meatloaf  that may fit the bill. It is gluten-free, swapping breadcrumbs for oats. Simply mix ground turkey meat with the oats, gluten-free soy sauce, gluten-free Worcestershire sauce, an egg and chopped parsley, along with sautéed onions, carrots and garlic—then bake it topped with ketchup (Kourtney says she uses homemade ketchup, which is insane.) Get the full recipe on her app.

And if you’ve got leftover turkey, try out Kris’s “go-to recipe after Thanksgiving:” Turkey and Cheese Enchiladas.

Inarguably the most important part of any Thanksgiving spread, and the Kardashians have plenty of options to choose from.

As roast chicken is to Ina Garten, sweet potato soufflé is to the KarJenner family. Kris’ original version is “very famous,” says Kris—and it inevitably pops up on each of the sisters’ snap stories every holiday.

If you’re a purist, you can make her exact recipe, or you can go for one of the sisters’ twists. Kourtney, for example, lightens it up by using fewer eggs, vegan butter and coconut milk in place of sweetened condensed milk, while Kylie douses hers with Aunt Jemima and tops it with Jet-Puffed marshmallows.

Here’s another family staple of which there are multiple varieties. The most notable, perhaps, is Kim’s “Super Cheesy” version, which first made an appearance in Kris’ iconic cookbook, In the Kitchen with Kris.

On her cheat days, Khloè makes it bite-sized by baking the noodles in a muffin tin (another great Thanksgiving idea), while Kourtney’s recipe adds turkey bacon and swaps “all organic ingredients, gluten-free noodles and non-dairy cheese.”

For a real departure, you could try Kendall’s signature dish of pasta and peas. Not traditional, but it’s the only recorded evidence we have of Kendall cooking anything.

During one of her #SoulFoodSundays, Kim revealed her secret to getting crispy edges on every piece of cornbread: Bake the batter in muffin tins (echoing Khloè’s mac and cheese tip).

During her Friendsgiving celebration of 2016, Kylie took this hack a step further by using a muffin tin in the shape of acorns, pinecones, pumpkin and squash. You can buy this exact Fall Icon Cakelet Pan from Williams Sonoma

RELATED: Kim Kardashian Has a ‘Last Supper’ of Pizza and Ice Cream Before Beginning Her ‘Lifestyle Change’

In the aftermath of Khloé’s great pie controversy of 2015, you may find it difficult to navigate the dessert portion of the evening in the style of a Kardashian. Did she buy three pies from Sweet Lady Jane Bakery in Los Angeles and claim on Instagram that they were homemade? Or, as Khloè argued, was this just a conspiracy brought upon by “petty” and “savage” haters?

Here’s our takeaway: Whether or not she did, It’s totally morally acceptable to try to pass off store-bought desserts as homemade on Thanksgiving. Just make sure it’s from a high-quality bakery so people don’t think you make garbage pies.

However, if you do want to make your own, here are some potential ideas.

Lest you still question her baking skills, watch Khloé make this revenge dessert from start to finish, and get her full recipe here.

The youngest sister made classic cinnamon rolls during Thanksgiving 2016, but if you’re looking for crispy edges and ridges galore to catch any glaze, she cooks them in a waffle iron.

WATCH THIS: How to Make Thanksgiving Leftovers Eggs Benedict

And there you have it: A full Thanksgiving meal that’s basically like having the Kardashians themselves cater. Because if you have to spend the holiday with your normal, non-famous family, you might as well eat like reality royalty.

Want the ultimate dish on the latest celebrity food news, plus exclusive recipes, videos and more? Click here to subscribe to the People Food newsletter.