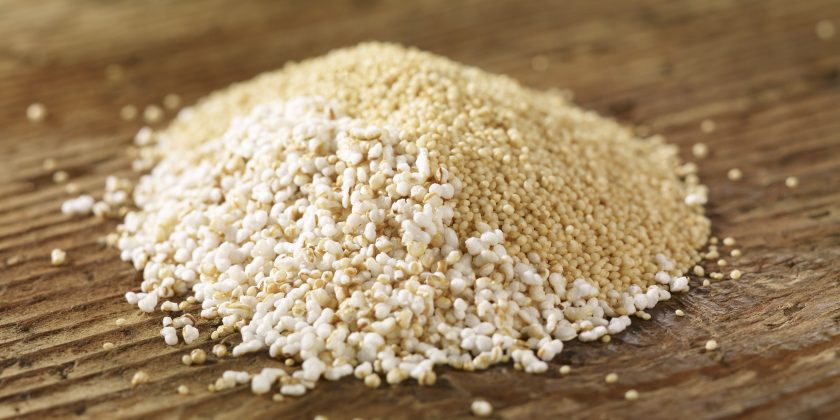 Chances are you’re no stranger to quinoa—after all, the “super-grain” makes frequent appearances on restaurant menus and healthy Instagram foodie’s feeds.

But what about its cousin amaranth? (I know, right…who? Wha?)

Yep, you should probably start stocking amaranth in your pantry ASAP.

But what is amaranth anyway?

Like many of its super-grain brothers and sisters, amaranth has been cultivated for thousands of years. In fact, it was a major food crop for the Aztecs, according to The Whole Grain Council.

Also interesting about amaranth? Even though it falls into the grain category—you cook and consume it similarly to rice or oats—it is technically considered a pseudocereal (buckwheat and quinoa also fall into this group).

“Pseudocereals are plants that produce fruits or seeds which are used and consumed as grains, though botanically pseudocereals are neither grasses nor true cereal grains,” according to a 2017 report by the Nutrition & Food Science International Journal.

Okay, but why should I eat it?

In terms of overall nutrition, amaranth is pretty flipping amazing. In addition to being naturally gluten-free, “it has more calcium, magnesium, iron, carotenoids, and fiber than most vegetables or grains,” says Sonya Angelone, R.D. “It is one of the plant foods highest in protein and also the only grain with some vitamin C.” Amaranth also packs twice the iron of quinoa.

Plus, its vast nutritional content means it packs a number of health benefits, too. Vandana R. Sheth, R.D.N. says amaranth also provides 22 percent of the recommended daily allowance of vitamin B6 (compared to just 18 percent in quinoa.) “B6 plays a key role in producing serotonin which affects our mood and sleep,” she says.

The grain also contains high amounts of thiamine (B1), necessary for nervous system function. And it’s a great source of riboflavin (B2), which is crucial for producing energy in your body.

The report in Nutrition & Food Science International Journal noted that amaranth is a good source of squalene, a compound that has been linked to reducing the risk of cancer and providing anti-aging effects. What’s more, Angelone says amaranth has anti-inflammatory properties, and has been shown to lower cholesterol. (Is there anything this grain can’t do?)

How does it stack up against quinoa?

While amaranth and quinoa share some similarities, there are a few key differences, says Sheth. For starters, while both grains cook pretty quickly, amaranth has a more distinct earthy flavor when cooked “as the seeds release an intense grassy aroma.” Quinoa, on the other hand, has a milder taste. And they differ in a few nutritional categories, too.

In 1 cup (246 grams) of cooked amaranth, you will find approximately:

On the other hand, 1 cup (185 grams) of cooked quinoa contains approximately:

How do I cook it?

Angelone says amaranth should be rinsed before cooking in order to eliminate saponin, a naturally occurring phytochemical that gives the unwashed grain a bitter taste.

Amaranth can simply be subbed in for rice as a healthy side to your main event (you can also try it in a Buddha bowl or as a sub in a quinoa salad), Angelone says you can also pop it and eat it like popcorn. “Just be careful so it doesn’t pop all over your kitchen!”