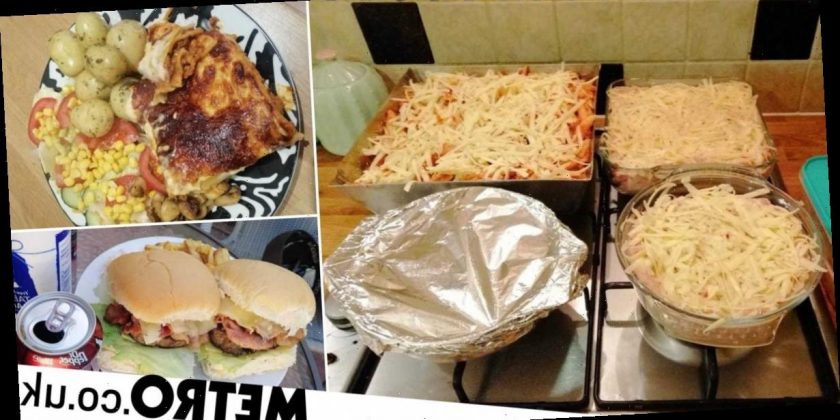 We’d all quite like to cut down our food budget without feeling like we’re missing out on tasty, nourishing meals.

Perhaps we can learn from Nicole Olivia James, 25, who has learned how to do a month of food shopping for just £24 a month, meaning she can feed herself and her cats for a fiver a week.

Nicole, from Pembrokeshire, Wales, was working as a carer when she had to drastically cut her budget.

‘I was living in that situation for about two years, it was not easy and I wouldn’t wish that stress on anybody,’ she said.

‘It’s really easy to fall into that kind of situation and super hard to get out, but it is possible.

‘I was working as a carer at the time and would work as many hours as I could.

‘Due to living alone, all bills would rely on my wage, so I had to do a lot of hours to cover costs.

‘I adored my job and my customers made everything worth it, they were family – I miss them all so much.

‘Unfortunately, the hours were not consistent so this would leave me short some months.’

Nicole’s living situation has now improved and she no longer has to shop on such a small budget.

But she’s held on to many of the lessons she learned for keeping costs down.

Her top tips for saving money on food include batch cooking large portions to freeze and reheat during the week, ditching pricey branded items, and bulking out meals with cheap ingredients such as carrots, lentils, beans, pasta, and rice.

Nicole also advises shopping in Lidl, writing a list before you step foot inside a store, and hunting out bargains whenever you can.

She said: ‘My favourite place to shop is Lidl and occasionally I would shop around for good offers.

‘Most weeks, I had less than £5 to spend and roughly just £24 left to last the month after paying all my bills.

‘This would have to include my budget for my cats too.

‘I was able to survive on such a small budget by batch cooking meals, cooking from scratch and reducing food waste by bulking out food with added vegetables or lentils.

‘I added grated carrot or lentils to anything with a sauce as it bulks out a dish without changing the flavour.

‘I also ditched more expensive brands for cheaper alternatives and most of them taste way better anyway.

‘If I ever had some spare change I would stock up on beans, pasta, rice and a few other tins including herbs, spices and stock.

‘You can make any meal delicious with the right herbs and spices.

‘A few of my low-price meals would be packed with vegetables to create a balanced diet.’

Many of her meals were hearty dishes like casseroles or pasta.

‘Stew packs from Lidl are only 89p and a bag of potatoes is £1, with that I would be able to make a meal last four to five days using just these two items,’ Nicole noted.

‘These meals are easy to make large amounts for cheap, meaning I could freeze them or eat them through the week.

‘I would adapt meals so that I wouldn’t get fed up. A couple of days before payday I would rely on my tins and dry food that I had stocked up on with my spare change.

‘My favourite meals would be either a Shepherd’s pie, spaghetti bolognese or stews.

‘These meals are super filling and tasty️.’

To those struggling on a budget, Nicole had some words of advice: ‘The message I would like other people who are struggling is – you are doing amazing and you should be proud.

‘This isn’t going to be for forever and you will come out the other side so much stronger.

‘There is nothing to be ashamed of and please do not be afraid to ask for help. Children will remember the memories you shared and the love you gave not the price tag of their childhood. Be proud that you are getting through it.’

Nicole says: ‘The pie is called Monday pie because its all the leftovers from your cooked dinner on Sunday, coated in gravy with cheap bread roll puff pastry on top.’

If you want more tips and tricks on saving money, as well as chat about cash and alerts on deals and discounts, join our Facebook Group, Money Pot.