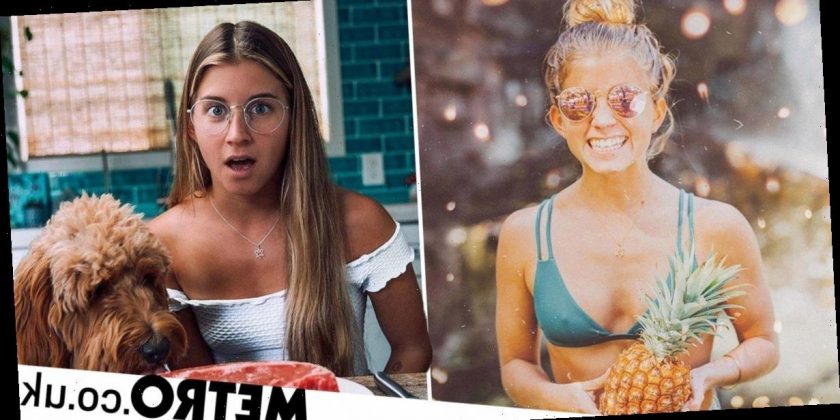 A woman who grew a following by showing how she lives as a vegan has angered and confused fans by deciding to eat meat.

Alyse Parker, a vegan of almost five years, said she was trying something new with a meat-only diet.

Alyse was criticised for having been on the carnivore diet for the past 30 days.

The carnivore diet is a restrictive diet that only includes meat, fish, and other animal foods like eggs and certain dairy products.

It excludes all other foods, including fruits, vegetables, legumes, grains, nuts, and seeds.

In a controversial Instagram post she wrote: ‘Coming from being vegan 4.5 years, I was hellla resistant to the concept of eating ONLY animal foods (aka only meat, seafood, + eggs)⁣.
⁣
‘I didn’t make ANY sense to me. It actually sounded pretty f*cking ridiculous.’

And so she tried the diet for 30 days and said she felt the health benefits of it.

Alyse explained to her followers that she is always trying new experiences and experiments such as not using deodorant for a year nor shampooing for a month.

And so when her friends told her about the carnivore diet, she decided to try it for herself, with surprising results she said.

‘I swallowed my pride and decided I’d give it a shot. Full-on carnivore. I woke up the next morning feeling more mentally clear, focused, wholesome, and healthy than I had felt in years.’

She then documented the journey on her Youtube channel where she referred to herself as an ex-vegan.

After experiencing some digestion issues in the first few days, Alyse claimed to have reaped the benefits.

She also shared her initial concerns with eating meat such as factory farming and the cost on the environment. So Alyse advised her followers to choose grass-fed and grass-finished meat and choosing local farms.

But the decision to reverse her vegan diet upset her followers.

One person wrote: ‘⁣I’m so confused as to how someone can be vegan for 4.5 years and then eat meat? Grass-fed and humanely raised doesn’t mean they are “humanely” slaughtered to pieces.’

Another chimed in: ‘Sorry, we have to unfollow. So disappointing. Food is more than a lifestyle. It’s a sign of respect for life. Choose compassion.’

Some people said the choice was ‘disgusting’.

Others were more understanding, saying: ‘I find it so strange that a vegan for so long goes the completely opposite route. But going full-on carnivore!? That’s crazy!

‘But I’m really glad you exist. I like to hear both sides of the argument. I wish you the best of luck on the toilet but endless support.’

Here’s the video of Alyse documenting her carnivore diet:

We’ve reached out to Alyse for comment and will update the article if she responds.