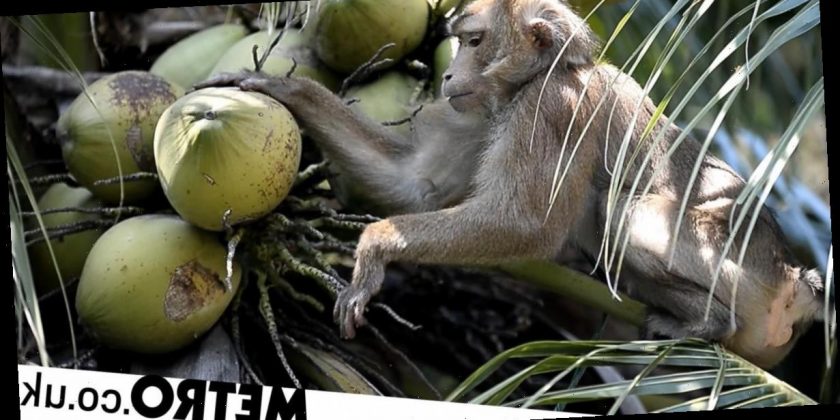 Supermarkets across the UK have withdrawn a number of products from their shelves, after a campaign by PETA highlighted companies who use monkeys to pick the fruit.

Coconut water, coconut milk, and other products made with coconuts are a staple for many people, and as a fruit would be considered vegan.

However, PETA Asia visited a number of coconut farms across Thailand and found that many were using macaque monkeys to climb the trees and pick the produce, with dire conditions observed.

They also visited several monkey-training facilities and a coconut-picking competition using monkeys and ‘documented abuse and exploitation’ at each one.

As a result, Waitrose, Ocado, Co-op, and Boots have removed certain items from sale, and Sainsbury’s and Asda are investigating whether those they sell are affected.

Tesco and Morrison’s state that the coconut waters and milks they sell are already produced without monkey labour.

PETA’s investigation found that some male monkeys were forced to pick up to 1,000 coconuts a day (compared to a human, who would be able to pick roughly 80) as well as being kept in cramped and dirty conditions.

They also state as part of their report: ‘Many monkeys are illegally abducted from their families and homes in nature when they’re just babies. They’re fitted with rigid metal collars and kept chained or tethered until they’re no longer useful to the coconut industry.’

Some monkeys allegedly have their adult canine teeth removed, with others being forced to participate in ‘circus’ style acts, doing tricks for the general public.

‘These curious, highly intelligent animals are denied psychological stimulation, companionship, freedom, and everything else that would make their lives worth living, all so that they can be used to gather coconuts,’ said PETA director Elisa Allen.

‘PETA is calling on decent people never to support the use of monkey labour by shunning coconut products from Thailand.’

The charity has produced a list of brands and supermarkets in the UK that sell coconut products harvested in this way, and it’s updated regularly.

Get in touch with us at [email protected]