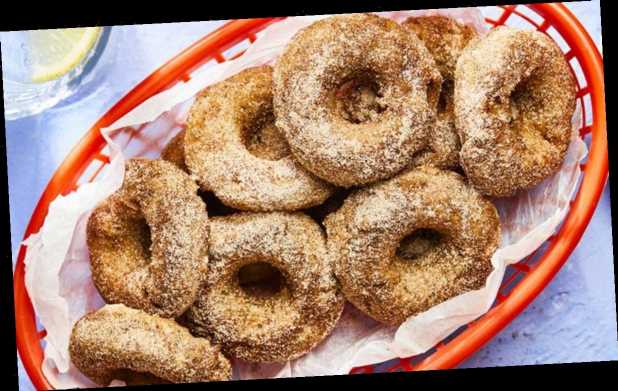 The Great British Bake Off has returned to our TV screens and we’ve already gone baking crazy!

If you fancy yourself a bit of an amateur baker and fancy trying a new recipe, we’ve got a simple-yet-delicious treat for you to try out – vegan baked apple doughnuts.

Recipe box company Gousto has shared their dairy-free recipe with us and they say all you need is a doughnut pan and a big bowl to get started. Plus, there’s no need for deep-frying as these apple and cinnamon doughnuts are baked.

MORE: 43 show-stopping celebrity birthday cakes that are out of this world

Try baking this easy doughnut recipe with the family

Preheat the oven to Gas Mark 4/175C/155C fan. Peel and roughly chop apples into small pieces and place on a lined baking tray. Bake for 20 minutes until soft. Mix chia seeds with 2 tbsp water. Set to one side. Once the apples are cooked, tip onto a chopping board, cool for a minute, then roughly chop until most of the apples are about 3-5mm.

Using a spoon or a piping bag, pour the mixture into the tin rings. Make sure they’re only ¾ full – this gives them room to rise. Tap the tin a couple of times on the counter, releasing any trapped air bubbles. Bake in the middle of the oven for 13-15 minutes, until risen. Remove, and allow to cool in the tin for 15 minutes, pulling away from the tin edges as they cool.

Mix the remaining caster sugar and cinnamon on a plate. Remove the doughnuts from the pan and coat in the cinnamon sugar. Top tip If the doughnuts are sticking in the middle, use a toothpick to loosen from the tin. They should then lift out easily. Serve fresh.