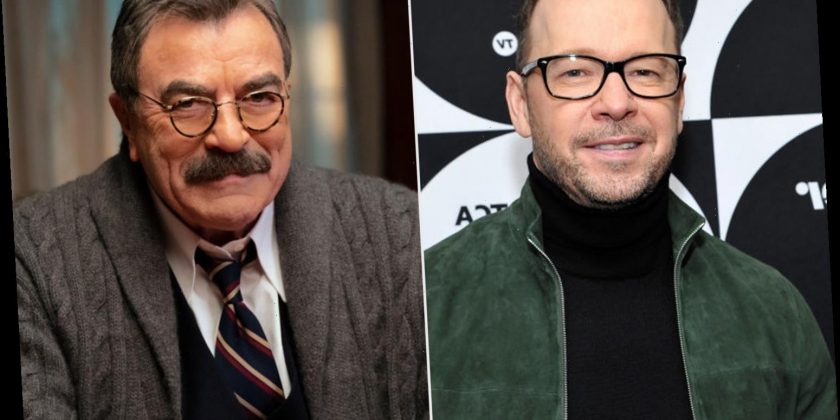 On Friday night, Donnie Wahlberg shared that his costar Tom Selleck recently left a $2,020 tip on a $204.68 bill for the servers at Elio's restaurant in New York City.

"I found out that my TV Dad Tom Selleck has generously accepted the #2020TipChallenge at Elios Upper East Side! Love ya dad," Wahlberg posted on Twitter, along with photos of Selleck's dinner receipt and sweet handwritten note for the staff.

The New Kids on the Block star tells PEOPLE that Selleck, who dined at the classic Italian restaurant in November, kept the generous gesture to himself for weeks. "Tom never mentioned it to me," he says. "We've done three [Blue Bloods] dinner scenes since he did it and he never told me."

In his letter, Selleck—who plays Wahlberg's father, police commissioner Frank Reagan, on the hit CBS drama—gave a special nod to his television son, who inspired him to share his good fortunes and good wishes with the staff. "For Elios, I am honoring my friend Donnie Wahlberg's 'Tip Challenge' with my sincere hope for a better 2020. Thank you all," he wrote.

Wahlberg tweeted: "I didn’t start it but I’m proud to be part of it. To those who gave even the smallest extra amount this year — THANK YOU."

The “2020 Tip Challenge” is a reference to a tipping trend that started in January 2020 in Michigan, when a server at Thunder Bay River Restaurant received a $2,020 tip on a $23 bill. On Jan. 2, Wahlberg and his wife, The Masked Singer host Jenny McCarthy, kicked off the new year by leaving a $2,020 tip for an IHOP server in their hometown of St. Charles, Illinois. The star repeated his act of kindness in November, when he also left his server at Marshland restaurant in Plymouth, Massachusetts a $2,020 tip on a $35.27 bill.

The tipping trend kept growing in 2020: A few days after the couple left the tip at IHOP, Harry Styles—who was on vacation at the time in Anguilla with longtime pal James Corden and Adele—left his own $2,020 tip on a $472.50 bill after a group dinner on on Jan. 5.

As for Selleck, keeping the news of the generous tip to himself is not out of character. “I’m a fairly private person,” the actor, who shot to fame with Magnum P.I. in the 1980s, told PEOPLE in April. “And I’ve always treasured the balance between work and time with my family. It’s always about them.”

When he is not filming Blue Bloods in New York City, he’s at home with Jillie, his wife of 33 years, on their Ventura, California, ranch. “My relationships and my ranch keep me sane,” says the star, who is dad to children Hannah, 31, and Kevin, 54, his son with first wife Jacqueline Ray.