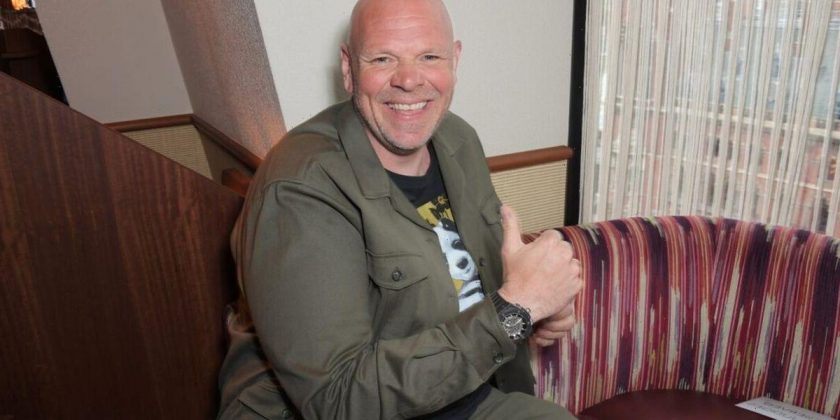 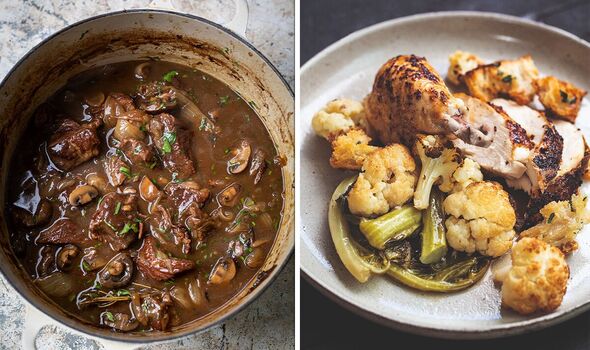 Express.co.uk has chosen three of Tom’s best, comfort food recipes for you to try out at home. Not only are they easy to make, but they are quintessentially British and are guaranteed to keep you warm and cosy on a wintry evening.

This recipe is from the cookbook Tom Kerridge’s Fresh Start, and is perfect for a “cold wintry day”.

Tom said: “Made with classic ingredients, this is a traditional stew with big, bold flavours. The alcohol will cook off in the oven, but stout has quite a powerful taste so if you’re cooking for kids you may prefer to replace it with extra beef stock.”

Preheat the oven to 170°C/Fan 150°C/gas three. Place a large non-stick casserole pan over a high heat and add one tbsp oil.

Season the beef with salt and pepper and brown in the hot casserole in batches until the pieces are well coloured on both sides, making sure you do not overcrowd the pan. Remove each batch and set aside on a plate.

Add the remaining oil to the pan and lower the heat to medium. Toss in the onions and cook for about 10 minutes until softened and golden brown. Stir in the flour and cook, stirring, for one to two minutes.

Add the stout and stir well to deglaze the pan, scraping up the meat sediment. Return the beef to the pan, pour in the beef stock and add the thyme. Bring to the boil, then put the lid on the casserole and cook in the oven for one and a half hours.

Add the mushrooms to the casserole, stir well and return to the oven for a further one and a half hours.

Season with salt and pepper to taste and stir in half of the chopped parsley. Scatter over the remaining parsley to finish and serve with mash, if you like.

This recipe is also from Tom Kerridge’s Fresh Start. Tom described it as “full of flavour and with a great texture, roast cauliflower is the ideal partner for roast chicken”.

“Chunks of toasted sourdough take the place of potatoes, providing a bit of crunch and soaking up all the lovely roasting juices,” he added.

One large free-range chicken, about 2.7kg

For the toasted sourdough

Take the chicken out of the fridge 30 minutes before you want to cook it. Preheat the oven to 170°C/Fan 150°C/gas three.

Trickle the remaining olive oil mix over the surface of the chicken and rub in well with your hands. Season with pepper and crumble the stock cube evenly over. Cover the tray with foil and seal it to the rim of the tray all round. Cook for an hour and 20 minutes.

In the meantime, break the cauliflower into florets. When the time is up, take the tray from the oven and lift off the foil. Turn the oven up to 220°C/Fan 200°C/gas seven. While it is coming up to temperature, add the cauliflower florets to the roasting tray and pour in the chicken stock.

Place the tray on the bottom shelf of the oven. Roast for 30 to 40 minutes or until the chicken is golden brown all over and the cauliflower is cooked, basting the chicken with the juices halfway through.

For the toasted sourdough, 20 minutes before the end of the cooking time, scatter the sourdough chunks on a small baking tray. Drizzle with the one tbsp olive oil and season with salt and pepper. Place on the top shelf of the oven for 15 to 20 minutes or until golden brown.

Sprinkle the chopped parsley over the sourdough and mix well. Remove the chicken from the oven and leave to rest for 15 minutes before carving. Serve the chicken with the roasted cauliflower and toasted sourdough, spooning over the pan juices.

This recipe is from Tom Kerridge’s Dopamine diet and contains “lots of big flavours”. Tom also described it as “comfort food dinner”.

He added: “With spicy merguez sausages simmered with the lamb and a creamy cauliflower purée topping enriched with tangy blue cheese, it really hits the spot – and doesn’t taste anything like diet food.

“Also, you can prepare it ahead, ready to bake and serve.”

A good dash of Worcestershire sauce

Two cauliflowers (about 700g each), cut into large florets

Preheat the oven to 200°C/Fan 180°C/Gas six. Place the lamb mince in a large roasting tin and roast, stirring 3 or 4 times to break up the mince, for 35 to 40 minutes until dark brown. It should look like instant coffee granules. Bake the merguez sausages in another roasting tin, alongside the lamb, for 10 to 15 minutes until cooked through.

Tip the mince into a colander to drain. Let the sausages cool, then cut into chunks.

Pour a splash of oil into a large saucepan and warm over a medium-low heat. Add the onions and garlic and sweat gently, stirring from time to time, for 10 to 15 minutes until soft. Stir in the fennel seeds, curry powder, cracked pepper and cinnamon and cook, stirring, for two to three minutes.

Stir in the celery and browned mince. Pour in the stock and add the Worcestershire sauce and some salt. Bring to the boil, lower the heat and simmer for one to one and a half hours, until beautifully thick and rich. Take off the heat and allow to cool.

Preheat the oven to 190°C/Fan 170°C/gas five. Stir the chopped sausages into the cooled lamb, then spoon into a shallow ovenproof dish, about 30 x 22cm and 8cm deep. Level the surface with the back of the spoon.

For the topping, bring a pan of lightly salted water to the boil, add the cauliflower florets and simmer until tender, about five minutes. Drain the cauliflower and place in a food processor with the butter, cream and some salt and pepper. Blend until smooth. Add the blue cheese and blitz to combine.

Spoon the cauliflower topping evenly over the lamb and sausage mixture. Stand the dish on an oven tray and bake in the oven for 30 to 35 minutes until the meat mixture is bubbling and the topping is starting to brown. Serve immediately.