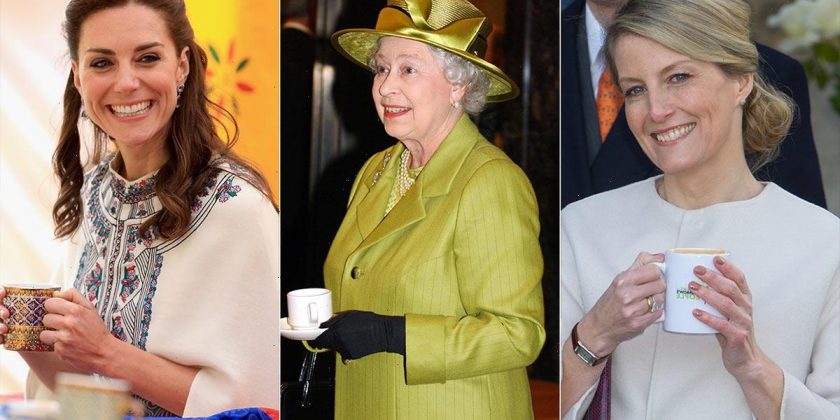 Brits and tea go hand in hand, and you don't get more quintessentially English than the royal family and a good cuppa from a fine china cup. Like most of us, the Queen and her family are partial to a cuppa and did you know that the Duchess of Cambridge enjoys a good old builder's tea – with a dash of milk!

Former royal butler Grant Harrold previously shared how Her Majesty prefers her brew on BBC Three show Miss Holland, revealing that the monarch is a fan of Assam and Earl Grey, and will always pour the tea in first, if she's taking milk.

While the Duchess of Sussex is said to prefer herbal infusions over English breakfast tea. In a piece for the September 2019 issue of British Vogue, Meghan revealed how she and Editor-in-chief Edward Enninful bonded over a steaming cup of mint tea.

Did you know there is a correct way to hold a teacup, which the Queen demonstrates at royal banquets? One should hold the top of your cup handle with your thumb and index finger and only sip from the same spot, to avoid multiple lipstick marks. Royal fans, take note.

It's International Tea Day on 21 May 2021, so what better way to celebrate our nation's love of tea than with some fabulous photos of the royal family enjoying a good brew? Take a look at the pictures below…

Here's the monarch holding a cup of tea back in 2003 at Buckingham Palace, as she chats to her grandson Prince William and Jayne Woodward, wife of former England Rugby coach Clive Woodward. The Queen looks so elegant standing with her white china cup.

Kate discussed raising the next generation of children with parents at the Ark Open Farm in Northern Ireland with a cup of tea. Kilcooley Women's Centre were one of the organisations to meet Kate during the royal visit and one Twitter user @LadyParky79 asked one of the questions we all want to know – how does the Duchess like her tea? The charity responded with: "Just like us little bit of milk…. so down to earth we were enchanted."

The Duchess of Sussex

The Duchess of Sussex opted for a mug of mint tea instead of coffee, during a visit to Birkenhead in January 2019. Meghan was six months pregnant with baby Archie at the time.

The Princess Royal and her daughter-in-law Autumn Phillips were spotted enjoying hot beverages at the Gatcombe Horse Trials at Gatcombe Park in 2018.

Princess Anne is said to be tee-total, preferring not to drink alcohol at evening charity events as she usually has a busy schedule of royal engagements the following day.

Diana enjoyed an Arabian breakfast during a tour of Saudi Arabia in 1986. We just love how chic she looked first thing in the morning, in a blue and white patterned tunic and crescent moon-shaped earrings.

MORE: Princess Diana's diet revealed: everything she ate in a day

Kate looked so elegant as she sipped her tea during her royal tour to Malaysia in 2012. We love the hair pearls!

Sophie stopped by the Daniel Department Store in Windsor in 2018, for a spot of afternoon tea.

The Queen and the Duke of Edinburgh

Her Majesty and the late Prince Philip took a tea break during a visit to Nauru island, northeast of Australia, in 1982.

This gorgeous black and white image shows the Queen's parents, King George VI and Queen Elizabeth (who later became the Queen Mother) taking tea at Buckingham Palace on their silver wedding anniversary in 1948.

The Duchess of Cornwall

Camilla visited the Yurt Cafe, a social enterprise in Limehouse, in 2019 and naturally stayed for a cuppa.

The Prince of Wales

Could this photo be any more British? Charles enjoyed some tea and a royal-themed cake at the Ideal Homes Show in London in 2012.