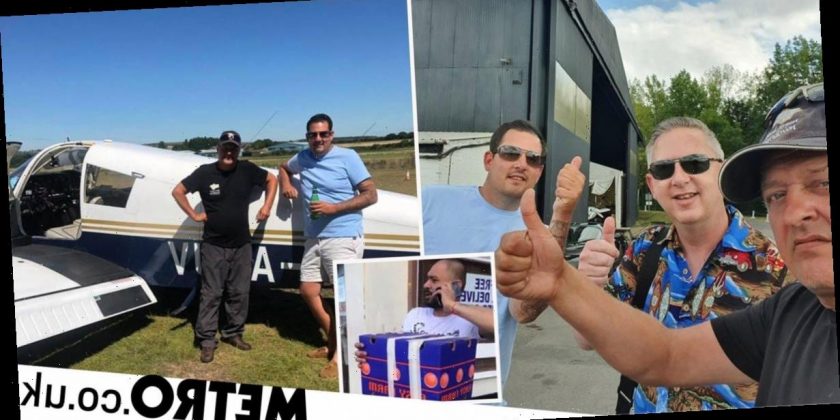 How far would you got for a good curry?

Danial Sabhani, 52, took his two mates Simon Ledger, 43, and Mike Figg, 39, out in his light aircraft, travelling from Sandown in the Isle of Wight to his favouite curry house Lahore Spice, near Harrow in north west London.

After leaving from Sandown Airport and arriving at Elstree Aerodrome, the friends jumped into a cab and drove 15 minutes to the curry house.

The journey obviously left them with an appetite and the trip feasted on a £50 mixed menu, before taking £200 worth of takeaway food home with them to the Isle of Wight.

The curry at Lahore and the takeaway food then came to £250 in total – but the pals say their method was still cheaper than other options.

Thankfully, the incredible food was also well worth it, while the journey gave them a good story for future pub visits.

Simon said: ‘Danial just said “Do you fancy a curry?” It was 2pm but I thought why not?

‘But he surprised us by taking us by plane. It is Danial’s favourite place. It was incredible.’

Simon, a musician from Shanklin, continued: ‘Danial then wound me up saying that he couldn’t fly.

‘He kept saying “Where is the manual?” as a joke.’

Their plane journey was cheaper and quicker than going by car and ferry.

Simon added: ‘It would have taken us 40 minutes just to get the ferry, then an hour on the boat costing £100.

‘It would then have been at least two hours from Portsmouth to drive to the capital.’

He added: ‘The curry was very nice and we even took some back with us.

‘When we got back it was still warm.’

Danial said he’d be popping the takeaway food in the freezer and eating it up over the next month or so.