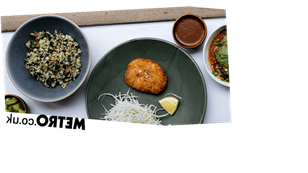 Where to eat in London this week: Carousel London, W1U

Let’s be frank. Tasting menus are often pretentious and leave you scrabbling for scraps or pondering a Big Mac on the way home. But the new Asian Greatest Hits menu at Carousel London is generous and laid-back.

The five-year-old restaurant, based just off Baker Street, launched the Greatest Hits series to celebrate the chefs who have frequented their kitchen over the years.

Tonight’s menu is inspired by the chefs who have served up Asian dishes there, including Carl Ishizaki from Sushi Sho Stockholm and contemporary Vietnamese chef Céline Pham.

The evening starts off with some spicy peanuts to nibble on, followed by a bowl heaped with Korean fried chicken (or corn balls if you are vegetarian). It’s extremely moreish, though I prefer mine a little bit spicier thanks to my numerous visits to Angry Chicken in Berlin.

This is followed by a soy-cured egg yolk with mackerel sashimi, alongside okra and crispy rice. It is a really gorgeous dish and, er, goes straight onto Instagram (you can check out our new Instagram here).

Mackerel sashimi, soy-cured egg yolk and crispy rice as part of the Asia Greatest Hits menu at @carousel_ldn. Tastes as good as it looks #BarFox #londonrestaurants

The highlight of the menu for me was their pork katsu, inspired by chef Yugi Tani. It comes with green onion and sancho rice, pickles, cabbage and tofu with numbing spices. The portion sizes are great and it easily feeds two greedy people.

Somebody once told me that you can’t go wrong with the house white or red at a restaurant, despite their reputation. It’s a case in point here. All of this pairs really nicely with their house bottle of wine, the very light and biodynamic Gran Cerdo white rioja.

The sixth and final course is a banana tarte tatin with a Thai basil sorbet. It is a great way to round up an evening of memorable plates in the informal setting of their cosy outdoor terrace. Shout out to the service, too, which is very good without being too in-your-face.

The Asian menu runs until August 8th and will be followed by The Mediterranean and The USA menus later on in the month. You can get them delivered or eat in, but make sure you pre-order on their website.

See you next week!

Erev opens up their alfresco restaurant in Borough Market this Friday. Look out for Tel Aviv inspired sharing plates from the people behind Shuk, a market stall. Every Thursday they will be offering set menus for one night only with chefs, including Helen Graham of Bubala and Eran Tibi of Bala Baya. Tickets for these are very limited, so be quick!

Erev opens up their alfresco restaurant in @boroughmarket this Friday. Look out for Tel Aviv inspired sharing plates from the people behind @shuklondon, a stall within the market #BarFox #londonrestaurants

The Cheese Bar in Camden will be offering their bottomless raclette nights every Wednesday as part of the government’s Eat Out To Help Out scheme throughout August. That means unlimited plates of raclette will work out at £9pp, rather than £18pp. That’s a serious bargain.

The steakhouse Hawksmoor have revealed a £10 steak and chips deal as part of the Eat Out to Help Out government scheme.

Dip&Sip kicked off in Brixton Brewery’s tap room last weekend for a burger and beer collaboration with Dip&Flip. It was a one off event for now, but a very promising start.

Well yesterday was pretty epic 🍻🍔 Bring on day 2! Tickets are no longer for sale online but send us a DM if you'd like to come along to the 2.45 or 5.45 session today and we'll see what we can do. 😉 Lotsa love, Team BB #popupinabrewery #dipandsip #londonevents #beerandburgers @dipflippo @campwildfire

Flora is a new outdoor restaurant and farm shop, opening on July 31st in Portobello Docks, from Stevie Parle and Tom Dixon. The restaurant plans to dish up seasonal food, including watermelon and feta salads.

Got a food tip for us?

Got a recommendation for us? Hit us up with the details at [email protected] for inclusion in a future article.

MORE: These 45 restaurants with Michelin stars are taking part in Eat Out to Help Out

MORE: You can now buy Deliveroo rider bags to keep your food and drinks chilled for picnics

MORE: Nando’s will offer a quarter peri-peri chicken for £1.85 in August