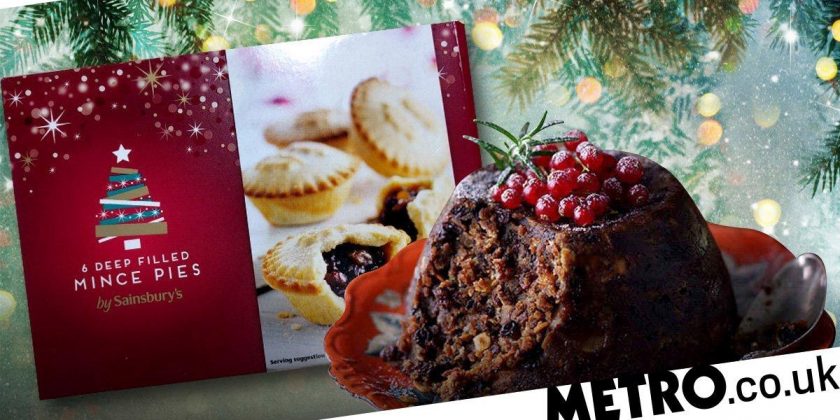 Balmy summer days may be behind us but one supermarket is already stocking its shelves ready for 25 December.

Despite being four months early, Christmas puddings and mince pies have been spotted in Sainsbury’s stores.

The deep filled mince pies, which are sold with six in a box, are priced at £1.

A picture of the mince pies was posted in popular money-saving Facebook group called Extreme Couponing and Bargains UK – prompting shoppers to make their opinions known about the arrival of festive foods.

One said: ‘Summer is officially over according to Sainsbury’s…. Either that or they have some new bakery staff practicing ready for Christmas…. Mince pies in September!’

Another posted: ‘No wonder we all say “time goes by so quickly”, we force it to by filling shelves as full as this, with mince pie in the summer and Easter eggs at Christmas.’

While a different member was not impressed, saying: ‘Have a word with yourself Sainsbury’s it’s only September.’

Other users even went as far to point out that it seemed like the supermarket was stocking up ahead of Brexit.

One said: ‘With kids going back to school this week @sainsburys are already selling Mince Pies for Christmas at the front of their stores… Reminded me I need to stockpile for Brexit.’

Some people were simply keen to share their love for the Sainsbury’s yuletide treats.

One Facebook user said: ‘I know they are early but they are the nicest mince pie.’

But Sainsbury’s is not the first supermarket to be going heavy on the festive foods.

Last week, Asda welcomed mince pies into their stores – despite the edible goods going off before Christmas, in October.