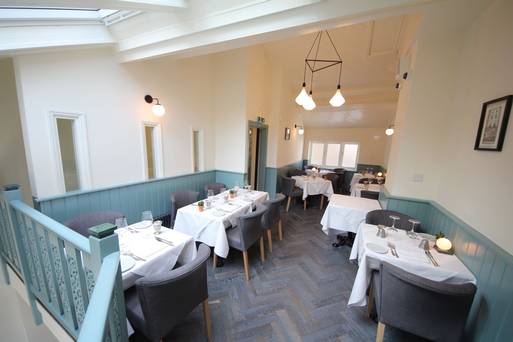 London looks its best in early summer, when the sun shines and the city is en fête. The influence of the Chelsea Flower Show extends far beyond the show-ground, with shop windows and businesses bedecked in extravaganzas of floral abundance.

It’s been a while since I ate in this part of London – the past number of years it seems as if all the exciting new restaurants have appeared in the east of the city. But chef Anna Haugh from Dublin has opened her first restaurant in Chelsea, so Chelsea it is.

Anna launched Myrtle early last month so our visit is earlier than I would normally review a new establishment, but for a young Irish chef to open her own place (Anna’s only backer is Anna, having saved for years and secured a small loan from the bank) in the UK capital is such a rarity, and a cause for celebration in itself, that we hop in an Uber and head west.

Anna started her professional career with Derry Clarke at L’Ecrivain before moving to London 15 years ago. She has worked with the best of the best, including Shane Osborn at Pied à Terre and Phil Howard at The Square, both two-Michelin-star restaurants at the time, and opened London House for Gordon Ramsay, where she secured three AA rosettes before her boss decided to change food direction and she moved on. She also spent time at the glamorous Bob Bob Ricard, famous for the dangerous ‘Push for Champagne’ call bells at each table.

The name Myrtle refers to the myrtle berries in the restaurant’s signature cocktail and is also a ‘romantic rather than literal’ nod to the late Myrtle Allen. The interior feels feminine and cosy, with just 37 seats spread over two floors. The opening menu is short, with four starters and the same number of main course options, and has a distinctly Irish sensibility, name-checking Irish products such as salmon from Burren Smokehouse, potatoes from Ballymakenny Farm and Cashel Blue cheese. We start with potato-wrapped Clonakilty black pudding served with a sharp Cox’s Orange Pippin apple purée, and a pig’s croquette, served with a sauce gribiche and pickled shallot. The two dishes actually look quite similar – crisp cylinders containing piggy unctuousness, elegantly presented – and both are properly tasty, but the croquette edges it, probably because I’m a sucker for an impeccably-balanced classic gribiche. The amuse of skin-on crisp, breaded chicken and trompette de la mort is perfection.

A main course of impeccable oat-crusted hake from Cornish day-boats comes with mussel veloute and pomme purée, while roasted beef fillet – flavoursome, tender, delicious – is accompanied by a Burren beef-stuffed boxty, and a tarragon and confit shallot jus. Anna’s signature desserts are buttermilk panna cotta with rhubarb jelly and cinnamon doughnuts, and a dark chocolate tart with orange ice-cream (think of a very sophisticated Terry’s chocolate orange and multiply it by 10) so we order both. The years Anna has served in high-end establishments shine through every mouthful; her food is immaculate and will scare no horses.

When I speak to her a few days after our lunch, she tells me she had been looking for a place to call her own for years, and was nearly broken when she lost a premises that she thought she had secured a few years back. She took to her bed and cried, but when she got up, she was more determined than ever to make it happen.

She wanted to open in a residential neighbourhood, because she loves the idea that people have ‘their’ restaurant – and regular diners are her favourite type of customer because she can get to know them. Now Chelsea locals have a pleasure in store, as they get to know Anna and her food. Our bill for two for lunch, including water and a bottle of Josef Ehmoser Zweigelt 2017 from Austria (£43), one of three house reds, comes to £167.63, which feels expensive to us as visitors from Dublin, but is par for the course in this rarefied corner of London.

A two-course lunch will cost a minimum of £60 for two before drinks or service.

ON A BLOW OUT

Pig’s croquette to start followed by the roasted fillet of beef with sides, and buttermilk panna cotta to finish, will cost £125 for two including 12.5% service but excluding drinks.