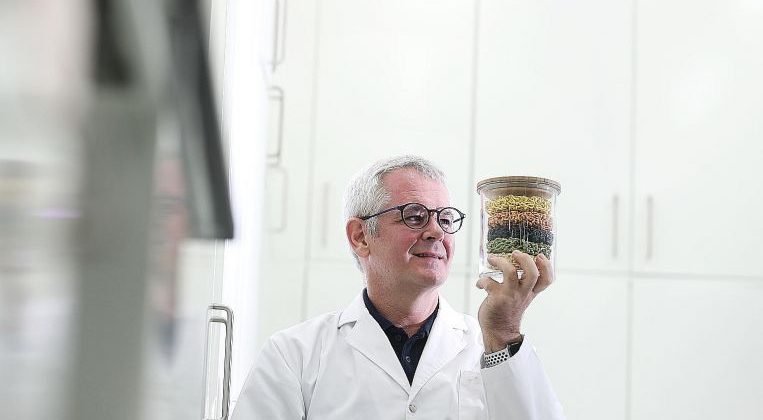 Healthy instant noodles may sound like an oxymoron, but not to Chris Langwallner.

Earlier this year, the co-founder of food science start-up NamZ introduced WhatIf, a range of nutritious and sustainable foods.

Besides shakes and soups, it also included that old staple instant noodles, but reinterpreted to be good not just for health, but also for the planet.

His NoodleZ are made from moringa and Bambara groundnut, varieties of what Mr Langwallner calls future-fit crops: nutrient-rich crops that can withstand predicted climates and be cultivated on degraded land, require less water, but produce good yields.

Unlike standard instant noodles, which are dehydrated through deep-frying and the use of palm oil, NoodleZ are produced using a proprietary technology – inspired by the one used to dehydrate toilet paper – involving steaming and high-velocity air.

The result? A 70 per cent decrease in fat content.

If 10 per cent of instant noodles sold were made with the technology, US$95 million (S$129.1 million) worth of palm oil products will be saved, Mr Langwallner says.

Launched in June, NoodleZ have been selling like hotcakes. The noodles are available online from www.whatif-foods.com. Even before the WhatIf brand was launched, the noodles – produced in a factory in Malaysia – were already being sold to restaurants.

The fact that it had a clear social impact also helped NamZ clinch a grant from the DBS Foundation Social Enterprise Grant Programme last year.

Born into a farming family in a village outside Vienna, Austria, Mr Langwallner – who has worked in countries including England, Russia, India and China – was not always so big on health and sustainability.

In fact, the entrepreneur, who studied agronomy and food science, once tipped the scales at 130kg – thanks in big part to a job spent making unhealthy snacks tasty and addictive through flavouring.

But over time, his conscience gnawed at him.

“The way I saw agriculture being developed, food being made and marketing gimmicks being used to attract people into unhealthy eating… At some stage, it didn’t feel right for me anymore, it felt awful,” says the 48-year-old, who is married to a food scientist.

The unsavoury things he learnt about the agriculture industry and the havoc it wreaks on the earth’s natural resources added to his misery.

“Since starting the interview, we’ve probably lost hundreds of football fields of arable land,” he says with a sigh.

So, he set up NamZ in 2014 with food innovator Peter Cheetham to create a “food science company that dedicates all our work towards creating a healthier planet and healthier people, one meal at a time”. You spent the first half of your working career in the food industry making “rubbish food taste good”. What was the breaking point? Becoming a father was one of the defining moments. It led me to be more sensitive to what we put into our bodies.

In my daily job, I needed to make snacks that were more delicious than the last. That meant a lot of fat and salt and adding flavours that have little to no nutritional value. I’d go home and discourage my kids from eating the food I made.

When you’re building a career, it can be hard to stop and reflect. But this career has also allowed me to learn, understand, accumulate knowledge, know-how and experiences, to form a well-grounded opinion on where we are heading in the industry, on what is wrong and what is right.

In this day and age, you need to disrupt an industry from the outside rather than from the inside. Inspiring change from within can be an impossible undertaking as the status quo is comfortable. So, I decided to do it with a start-up.

In a start-up, you start afresh. You make new rules, redefine what is normal, embrace what you learn to be right and wrong and challenge the status quo.

You are trying to start a food revolution and you are starting with noodles? Why? Instant noodles are a paradoxical food. They were meant to fill stomachs after World War II, yet they contribute very little nutritional value. Today, more than 100 billion portions are eaten every year.

Our challenge was to make the unhealthy food we know and love so much nourishing. And convenient.

Why the name WhatIf? Our story started with asking ourselves “what if”. First, it was: “What if we could find a way to make instant noodles healthy?” Then the question became: “What if eating noodles were healthy and good for the planet?” That is still not good enough. “What if noodles could do all of these things and uplift farming communities?

At every step of our journey, asking ourselves “what if” has led us to a better vision of what the future of food could be. By asking “what if” at every corner, not only are our instant noodles today healthier, but they are also good for the planet and empower smallholder farming communities.

And it wouldn’t be the last time we ask ourselves this question.

At the heart of what you do is this concept called the “nutritional paradox”. How would you explain that to a seven-year-old? This is what I would probably say: “Listen, you know that eating in fast food restaurants and munching snacks is not healthy for your body. The best thing you can do for your body and mind is to eat as many types of plants as possible.

“And because so many people are eating the same thing, what we eat is hurting the people who grow our food and hurting the planet.

“Let’s go to the kitchen and play with colours, textures and flavours. Let’s put together 25 plants such as peas, fruit, beans, lentils and vegetables, or take them apart. Experiment. Have fun.

“You will see that we can eat so many tasty things, with colours like the rainbow, other than the food we have grown up to eat.

“And this is how you will help farmers as well as your planet.”

Give some scarily compelling reasons why people should think about the way food is grown and consumed now. There are many, but here are a few.

How and what we eat are hurting us: About 2.3 billion people on our planet are obese or overweight, another two billion are nutritionally challenged, 800 million go hungry every night, while the rest of us – about 2.5 billion people – have somewhat achieved an acceptable “well-being”. This means seven out of 10 people suffer from what they eat.

As for how the way we grow our food is hurting our planet? Just 12 crops and five animals make up 75 per cent of all food that we consume, while only three plants make up 60 per cent of our calories.

In most regions of the world, more than 70 per cent of freshwater is used for agriculture, which contributes a third of all global human-induced greenhouse gas emissions.

Finally, 77 per cent of arable land is used to produce feed for livestock, which makes up only 17 per cent of all calories we consume.

The way we grow our food is also disempowering farming communities – 2.6 billion lives are directly linked to agriculture, 74 per cent of which are the poorest of the poor.

Intensive agriculture has left behind degraded lands while encroaching into the remaining and retracting forests of our planet.

As a consequence, we see more mass climate refugees everywhere in the world.

This is the second in an eight-part interview series on social entrepreneurs making a difference.

Sign up for the ST Food newsletter for weekly updates on the latest food trends and best eats in town.