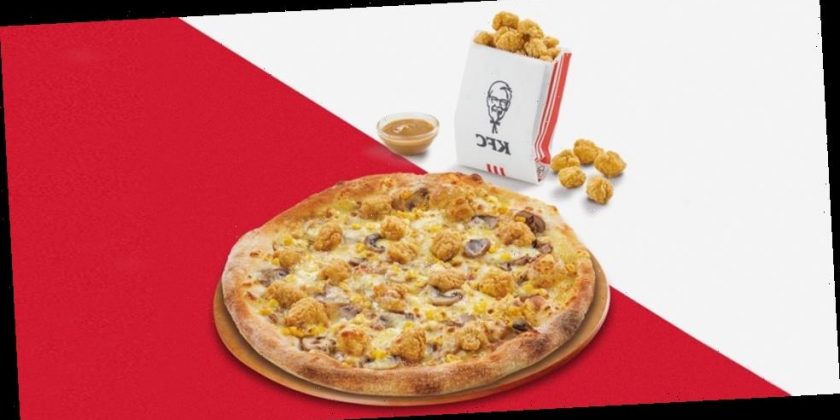 Pizza Hut and KFC have teamed up to deliver a pizza that takes on some of the most popular foods of both franchises. Coming hot out of the oven is a limited-edition “Popcorn Chicken Pizza,” alongside a two-player game that you can play with the person you’re sharing with.

The pizza features both Pizza Hut’s crispy crust and KFC’s Popcorn Chicken. It comes with a lustrous serving of cheese, sweetcorn and mushrooms, a simple trifecta that works to bring out the flavors of KFC’s signature deep-fried pieces — classic gravy has also been added to top off the set. But besides the pizza, this collaboration also comes with a game that challenges “two players to craft a ‘Pizza Hut x KFC Chicken Popcorn Pizza’ against the clock” as they take on the rolls of either a Pizzatainer or Colonel Sanders. Players will have to “knead the dough, fry the chicken popcorn and bake the pizza” — if the tasks are completed in time, players are awarded with Pizza Hut and KFC coupons.

Pizza Hut and KFC’s “Popcorn Chicken Pizza” will be exclusively available in Hong Kong — prices have yet to be confirmed.

In case you missed it, Pizza Hut has created a Pizza Box with an integrated foosball table.
Source: Read Full Article