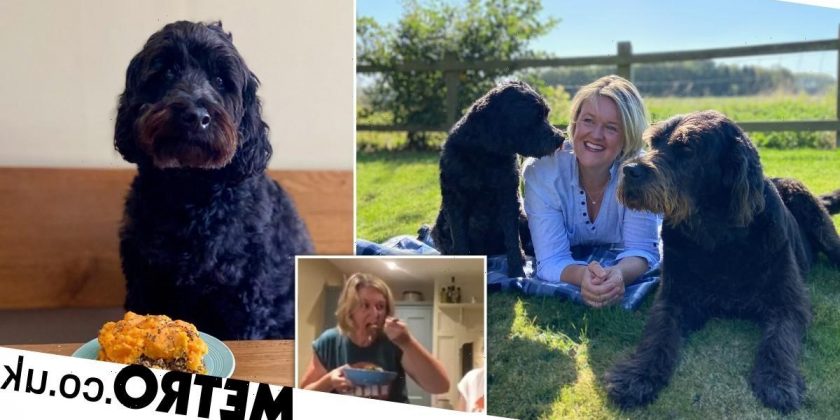 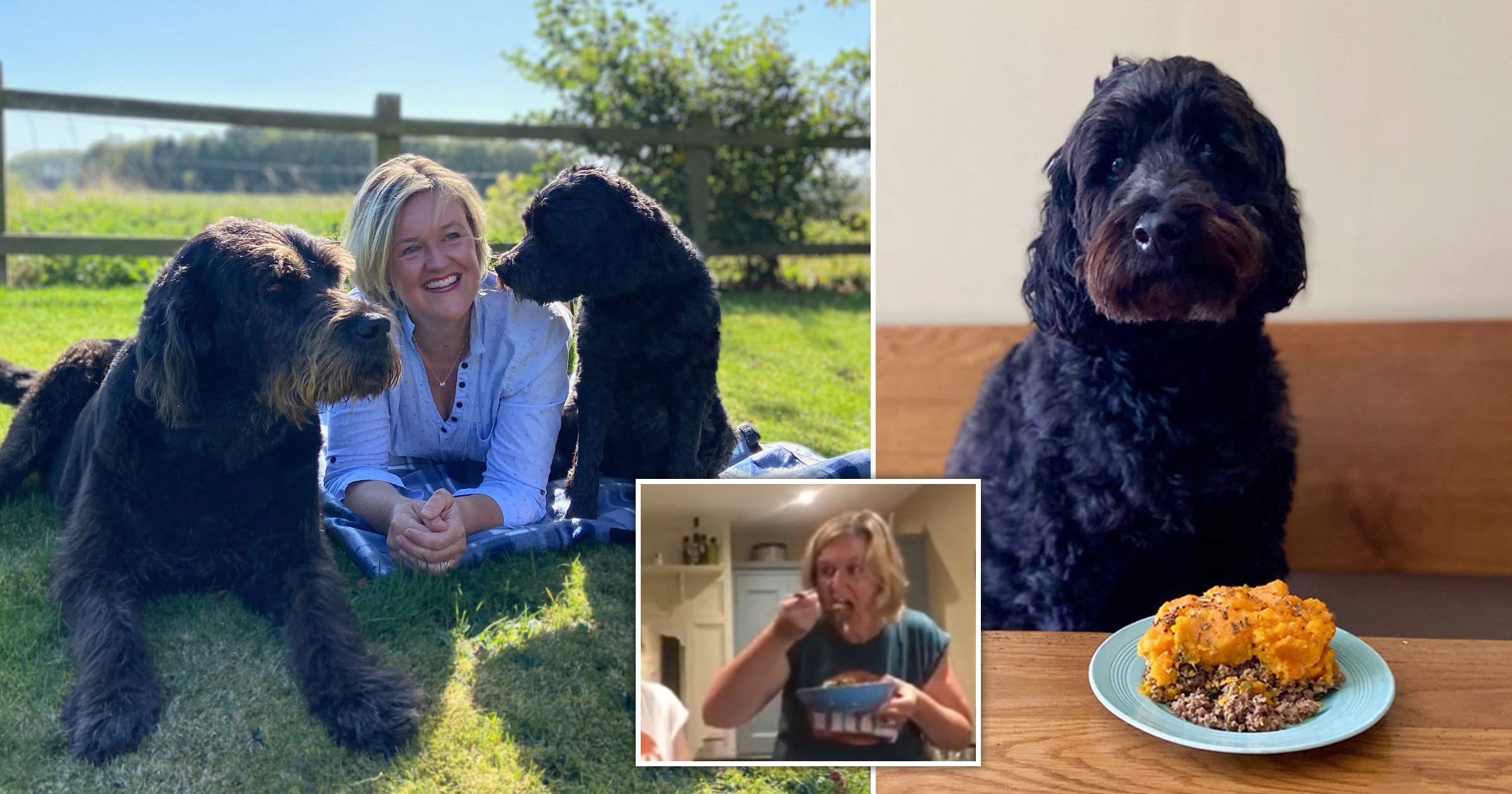 A woman who ‘loves’ eating dog food has said she prefers dining with her furry friends to most humans.

Vicky Marshall, who founded pet food brand Hug, is not aware of any other ‘pet food tasters’ and believes it would be barking mad to feed dogs food that humans would not eat.

The 51-year-old says she is prepared to put her ‘pet food where my mouth is’ and even does cook-along online sessions where she enjoys pawfectly nice meals made for dogs.

But Vicky insists her dog’s dinners are unlike the more traditional tins of mushy, questionable meat – and revealed that she had to turn down tonnes of feathers offered as ‘chicken protein’ by one supplier.

Calling for pets to be given ‘real, recognisable ingredients’, Vicky sent Metro.co.uk some of her creations, explaining that she often eats her dog food raw – but recommends first timers cook it in a pan for themselves or in a microwave for their dogs.

Without even a bit of cajoling or the promise of a few treats, we have taken up the offer, given the meals surprising ratings out of five and fed it to our canine cooking companions Daisy, Millie and Bailey for more expert opinions. (Scroll down to see the results).

Vicky told the website: ‘I love eating our dog food, especially after we have created one of our cook-along recipes.

‘We love sharing ideas about how you can enhance your dog’s diet with real food.

‘It empowers pet parents to nurture their dogs with food from their fridge or store cupboard.’

But Vicky is not the first of her kind.

Philip Wells used to be Lily’s Kitchen pet food’s ‘chief taster’ – and did not shy away from eating the questionable-smelling tins Brits tend to associate with feeding their dogs.

He admitted to The Guardian in 2015 that he quite liked the taste of them, while one elderly British couple living in France sent their daughter into hysterics by asking her to buy them more ‘delicious pate’ – only to find out it was in fact cat food.

Vicky – originally from Berkshire, but who now lives in Wiltshire, where the company is based – has never tried dog food of that ilk.

Instead, she uses fresh vegetables and British herbs, alongside ‘real’ cuts of meats and Antarctic krill to make her dishes.

She says she prefers it to the cat food Hug creates – which is purely meat-based – and that she would ‘prefer to dine with my dogs over most humans if I am honest’.

Her idea initially arose thanks to her ‘really fussy’ mini labradoodle, who she wanted to start eating more healthily.

Fletcher, who is eight, was rehomed with Vicky and now enjoys sharing ‘doggie ice-cream’ and other treats with ‘Rudi Doodle’, a 13-year-old labradoodle that Vicky affectionately admits is the size of a ‘small pony’.

Vicky hopes that pet owners can change their habits by giving their pets a healthier diet – and says people can also reduce food waste by doing things like giving ‘bashed up bananas’ to their dogs.

Turning to the worst of the pet food industry, Vicky argues that there are ‘a lot of slightly questionable promises’ about ingredients supposedly fit for human consumption.

She singles out green tripe as one item that is fine for dogs but ‘pretty catastrophic if eaten by humans’.

‘Some food is full of offal and too much bone; some contain too much poor quality carbohydrate or pulses and legumes’, she explains.

‘One of the single most horrifying examples of not nice food was when an ingredient supplier made a cold call to me and offered a few tonnes of chicken feathers… I thought it odd as I wasn’t running a soft furnishing company… and the caller explained the feathers were being legitimately sold to be popped into dog food and called “chicken protein”.’

She added: ‘Because we really do use the best human grade ingredients, I felt the best way to demonstrate that was to eat it myself’.

We enlisted the help of three canine tasters of varying levels of enthusiasm – and our intrepid reporter, whose enthusiasm was at best very limited.

The new mum enjoys her normal diet of dry and raw food but seemingly can’t wait to get stuck into a new snack, following another tiring day of looking after her puppies.

After a quick lick of the lips and with tail wagging furiously, Daisy dives straight into the pork option, demolishes it, and then promptly devours the chicken one too.

She reckons the pork deserves a solid 5.1/5 and the chicken gets a respectable 4.9/5.

Fussy Shih Tzu Millie has had a hard weekend of gorging herself on her favourite doggy treats, so the offer of more food perhaps comes at the wrong time.

Normally given a wet diet, the adorable fluffball isn’t very excited by the new culinary delights put in front of her.

Millie has a good sniff of both, turns her back and walks off.

‘Yeah but she’s like this with her own food, she’s a nightmare’, her owner notes – before Millie duly proves the point by turning down a plate of her normal grub too.

Also unenthused is news reporter and lax vegetarian Harrison, who is – as you might have noticed – not a dog.

Bullied into these shenanigans by a colleague, Harrison has gingerly cooked a morsel from each of the dog foods in the glamorous name of journalism.

A quick look at the ingredients confirms this does pass the ‘is it actually edible’ test and even suggests it is healthier than some questionable sausages and meatballs, which it vaguely resembles.

It doesn’t taste utterly awful – merely quite awful, with the chicken version a particularly chewy affair.

However, it is probably a bit better than his rock-bottom expectations.

Harrison’s score: 0.5/5, someone get him a Pulitzer as a consolation prize, please.

Usually fed dry meals and also a fan of ‘real’ food, Bailey is completely nonplussed by the offering but humors his human friends admirably in their sterling efforts to get him to have a taste.

Despite multiple attempts, Bailey is more interested in sniffing the door, sitting in the corner and walking off.

He’s persuaded back into the kitchen when the raw food is cooked for him, but once again doesn’t even fancy a bite.

Bailey in fact spits a pair of smaller offerings on to the floor and leaves the two steaming piles untouched.

Bailey’s score: 1/5, he could take it or leave it, but actually he just leaves it.

Get in touch with our news team by emailing us at [email protected].

For more stories like this, check our news page.