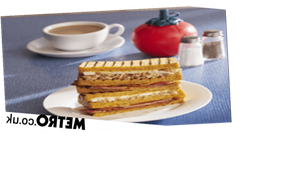 Arguably, Heston Blumenthal is one of those people, who is famed for his madcap culinary creations that often verge on ridiculous.

His collaboration with Waitrose includes cherry bakewell vodka and bloody mary prawn cocktail among other things, with most of them presenting a twist on an old classic. And this new addition is certainly a twist.

Looking for a way to create the perfect on-the-go breakfast, Heston decided to add all the elements into a breakfast sandwich. But when we say all the elements, we don’t just mean bacon and sausage.

Who needs a latte when you can just have it mixed in with your red sauce for breakfast, eh?

The creation – which launched in stores today – normally costs £3.80, but is currently £2.85 due to an introductory offer.

Heston said of it: ‘There are many reasons why some dishes become our favourites, they can be complicated master pieces of culinary delights. But there are times when all you want is a Full English.

‘So I looked at how to satisfy that craving, any time, anywhere and I realised the solution was a sandwich. If you’re looking for the best brunch-on-the-run, or just wondered what it might be like between two slices of bread, you’re going to love this. It’s even got the coffee in there.’

As you may be able to imagine, the response on social media has been fairly lukewarm (to put it mildly).

One tweeter wrote, ‘Heston needs to grow up, I’m sorry’, while another said, ‘Heston Blumenthal continues to prove there’s no classic he can’t ruin. Coffee and mushroom ketchup? WHY? Ugh I hate him.’

Us Brits are fairly precious about our breakfasts – don’t even get us started arguing with Americans about baked beans – so it’s not totally surprising.

Consultant chef at Waitrose Will Torrance tweeted in defence of the sandwich, though, saying: ‘It’s DELICIOUS!’

Be that as it may, Waitrose’s feed has now been plagued with accusations of pretentiousness and questions over what cold-pressed mayonnaise actually is.

Perhaps Heston will need to win us round with something a little less Willy Wonka of the local caff.