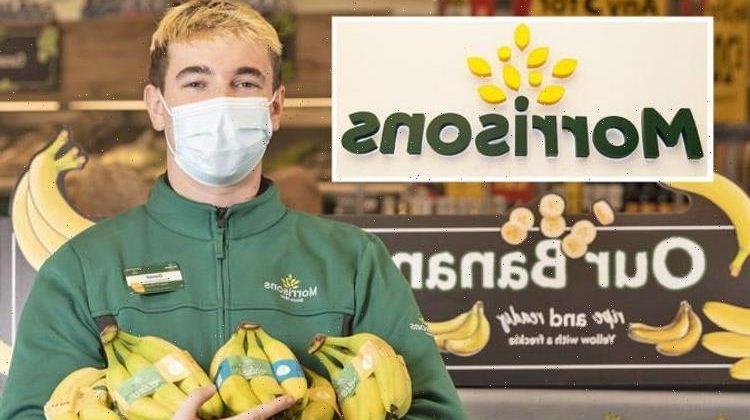 Morrisons is making waves in the retail industry as they announce another plastic-free pledge. Recently, Express.co.uk reported the food giant was aiming to become the first zero waste supermarket by 2025 with either the store itself or from their customers who shop there. Now, in a bid to reduce the amount of plastic packaging their items have, Morrisons have revealed their plans to remove all bags from bananas.

Bananas are the second most commonly bought product in Morrisons stores.

On Monday, the supermarket pledged to become the first in the retail industry to remove plastic bags from all of the bananas sold in its stores.

Instead of plastic bags, Morrisons have created a strengthened paper band.

The new strengthened paper bands are made from FSC certified paper, which will ensure that banana bunches remain intact.

The roll out of the paper bands will be completed in six months.

The ban is part of Morrisons’ drive to reduce plastic and revert back to traditional grocery packaging methods.

Morrisons recently launched a glass milk bottle trial in which bottles of milk are delivered directly to its supermarkets by local dairy farms.

Once returned by customers, the bottles are collected, sanitised and can be reused for 10 years or more.

Morrisons was also the first supermarket to reintroduce paper and string bags for fruit and veg, to provide sturdy paper carrier bags at checkouts and to refill customer containers at its Market Street counters, to avoid single use plastic packaging.

Elio Biondo, Banana Buyer from Morrisons, said: “Bananas have their own packaging – their skins.

“They also grow in bunches which generally means they don’t need bagging together.

“So a simple sturdy paper band is the ideal alternative. In trials the quality of the bananas has remained the same, so this switch out of plastic is a no-brainer.”

Morrisons has committed to a 50 percent reduction across its own brand primary plastic packaging by 2025.

Initiatives introduced over the last 12 months will remove 8,000 tonnes of unnecessary or problematic plastic each year.

83 percent of Morrisons own-brand plastic packaging is now able to be recycled.

They pledged to become the first supermarket completely supplied by net zero carbon British farms by 2030 – five years ahead of the market.

It comes as UK agriculture accounts for 10 percent of all UK greenhouse gas emissions.