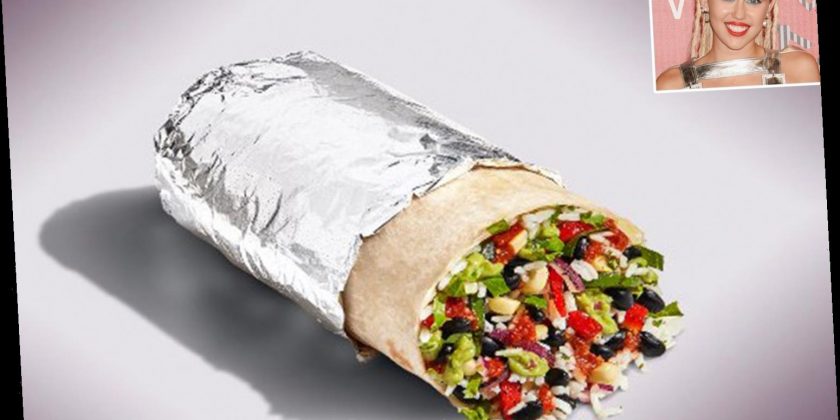 Chipotle has named a burrito after the 28-year-old singer after she commented on the restaurant's TikTok account.

On Tuesday, the fast-food chain shared a short video of someone holding up a wrapped burrito with the name "Miley," along with the words, "if miley cyrus comments we'll make a miley burrito in our app."

Cyrus obliged, commenting, "only if you name it 'the Guac is extra but so is miley burrito'…"

On Wednesday, Chipotle shared on Twitter that the deed had been done — and that Cyrus' order had been added to their app under that name.

The "Plastic Hearts" singer's burrito is stuffed with white rice, black beans, fajita veggies, roasted chili-corn salsa, tomatillo-red chili salsa, romaine lettuce and guacamole. It comes in at 1,030 calories at the price of $8.75.

Cyrus' Chipotle order is notably vegetarian, though she opened up earlier this year about no longer following a vegan diet.

"I’ve had to introduce fish and omegas into my life because my brain wasn’t functioning properly," Cyrus said in an interview on the Joe Rogan Experience podcast in September.

Asking Cyrus to comment on a video has become a TikTok meme — and last week, the "Prisoner" singer even nudged a couple in the direction of getting married. In that video, a couple danced around a living room with text on top of the clip that read, "if miley cyrus comments we will get married."

The "Midnight Sky" singer spotted the clip and commented, "Hope it goes better for you two than it did for me," she wrote, adding an engagement ring, skull and crossbones, and black heart emoji. "congrats."

The user shared another video in response to Cyrus' comment, showing one of the people from the original video and someone off-screen saying, "contemplating." The caption for the clip read, "@mileycyrus HE LOVES YOU SO MUCH."