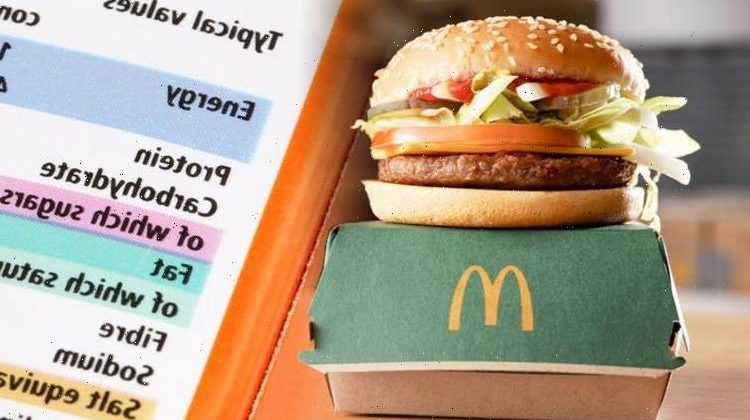 McDonald’s McPlant burger has been rolled out to more than 250 locations across the UK. The vegan burger offers an alternative to the traditional Big Mac. While it is a welcome menu update for meat-free diets, it turns out the plant-based burger might not necessarily be a healthier option.

What ingredients are in the McPlant burger?

The McPlant burger has been hailed as McDonald’s first plant-based replica of a burger.

McDonald said: “McDonald’s UK&I has spent three years on research and development to bring a delicious plant-based offering to British and Irish customers.

“Every element of the McPlant was designed with taste and quality top-of-mind – from the plant-based patty co-developed with Beyond Meat, to innovative vegan cheese based on pea protein that tastes just like McDonald’s iconic cheese slices, and a new vegan sauce.”

The fast-food giant described the new burger as “a vegan burger made with a juicy plant-based patty co-developed with Beyond Meat featuring vegan sandwich sauce, ketchup, mustard, onion, pickles, lettuce, tomato, and vegan cheese in a sesame seed bun.”

McDonald’s also notes that the burger is “vegan certified”.

A breakdown of the specific ingredients in the McPlant burger includes:

What is the nutritional value of the McPlant burger?

McDonald’s is not necessarily the first place one would go when looking for a healthy meal, however, it is a nice treat.

Though vegan food is great both for non-meat and non-dairy eaters or for those looking to cut down on their intake of animal products, fast food versions are not always the best when embarking on a healthy diet.

With that said, the McPlant burger does have fewer calories than some McDonald’s burgers.

The fast-food restaurant provides a full breakdown of the nutritional value of the new burger on its website.

Perhaps what is most shocking is the burgers salt content when compared with another popular menu item.

Nutritional experts from OriGym conducted research into the McPlant burger and found that it contains more than twice the amount of salt as large fries.

A large portion of McDonald’s fries contains 0.8g of salt, while the McPlant burger contains 2.2g.

According to their research: “The McPlant falls behind when it comes to its salt content, where it places high on the list with 2.2g and contains more than double the amount of salt into a large portion of large McDonald’s fries.”

Is the McPlant burger healthier than a Big Mac?

The McPlant provides a meat-free alternative to traditional burgers on the McDonalds menu, such as the popular Big Mac.

The fast-food restaurant describes a Big Mac as “two 100 percent beef patties, a slice of cheese, lettuce, onion and pickles. And the sauce. That unbeatable, tasty Big Mac sauce.”

According to the nutritional information listed on the McDonald’s website, the Big Mac has a higher calories content than the McPlant.

However, the Big Mac soars above the McPlant in terms of its saturated fat content, with 9.5g compared with the vegan burger’s 6.6g.