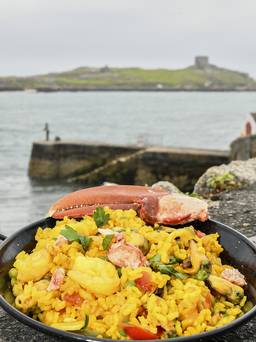 From chef Kristan Burness of The Dalkey Duck 4 cherry tomatoes, chopped and fried in one of the tablespoons of hazelnut oil until they collapse

A squeeze of lemon juice

1. Freeze the lobster for 35-40 minutes to prepare it humanely.

2. Poach the lobster in boiling water, separating the claws from tails. Poach the tail for 4 minutes and the claws for 5 minutes.

3. When cooked, refresh in ice water to stop the cooking.

4. To make the hazelnut butter, use butter at room temperature, and add the hazelnut oil, half the lime juice, half of the coriander, followed by the chives, chilli, garlic and ginger. Blitz with a hand-blender to emulsify the ingredients. Whip the butter mixture gently. 5. Take the hazelnuts and smash them in a bag using a rolling pin so they are finely crushed.

Retain 50g for a garnish and add the remaining 250g of the hazelnuts to the butter. Add the spring onions.

6. Smash the claws of the lobster and remove the meat. Split the main body from head to tail. Remove the tail from the shell. Place the claw meat in head cavity and place the tail back in its shell. Stuff these cavities with wilted spinach and tomatoes.

7. Place generous helpings of the flavoured butter on top of the lobster. Warm under a pre-heated grill for three to four minutes until the butter is melted and the lobster is heated through.

8. Garnish with juice of the second lime and add the rest of the coriander and the remaining hazelnuts. A good handful of frozen peas

1. Add a small amount of olive oil to a medium-heated frying pan and fry the chorizo for a minute until it cooks through and starts to release its coloured oil. Remove the chorizo from the pan and place to one side.

2. In the oil, gently fry the onion, garlic and peppers for a couple of minutes until they start to soften. Add the white wine and reduce by half its volume.

3. Add the paella seasoning and tomatoes and mix thoroughly. Add the rice and stir through well to ensure that every grain is covered with the liquid.

4. Steam the lobster until cooked. For advice on cooking times, based on weight, ask your fishmonger. After cooking, split and clean. Add the fish stock and reduce the heat to a simmer, the rice will absorb all the stock in approximately 15 minutes. Before all the liquid has been absorbed, add the seafood mix and cook for five minutes. Then add the cooked chorizo and cook for 2 to 3 minutes. Add the frozen peas and cook for a further 2 to 3 minutes.

5. Slice up the lobster tail and place over the top of the paella – crack those claws and use all the lobster meat from the knuckles. Check and adjust the seasoning with salt and pepper and add the chopped parsley. Serve immediately with fresh lemon wedges.

From chef Jérôme Fernandes of The Guinea Pig, Dalkey 1. In a large pot, bring to boil three litres of water with 4 dessertspoons of sea salt and a bay leaf. When boiling, immerse the fresh lobster. For advice on cooking times, based on weight, ask your fishmonger. Then chill the lobster in ice cold water. Remove the lobster and place on a plate to drain. Remove the meat from the claws and knuckles, tails and legs.

2. Boil the peeled Jerusalem artichokes in boiling salted water and half the lemon juice for 15 minutes until tender, drain well and divide in two. Dice the first part into small cubes (brunoise style). Crush the second part with a fork and mix with cottage cheese, salt and pepper.

3. Oven bake the golden beetroot by placing the beetroot in foil with a dessertspoon of olive oil and salt. Bake for 35 minutes or more depending on the size. When cooked, peel and dice into cubes.

4. Place 5 dessertspoonfuls of olive oil with the red chilli in a pot, and heat to almost boiling-point. Then leave to infuse for 30 minutes.

5. Cut the peach into small cubes and add the chopped coriander. With a blender, mix the zest of one lemon, the remaining lemon juice, pinch of salt and pepper and Dijon mustard. Add the remaining olive oil at the end.

6. To plate up, add the crushed artichoke followed by the lobster, diced garnishes of artichokes, beetroot, peach and rocket leaves seasoned with the lemon juice dressing. Finish off with a drizzle of chilli oil.

If cooking live lobster, Ballymaloe chef Ivan Whelan recommends the following: ⬤ Submerge the live lobster in a pot of lukewarm water with 2 teaspoons of salt per pint.

⬤ Cover with a tight-fitting lid and place on a very gentle heat, bring to a simmer and cook until the whole shell has turned from blue to orange. ⬤ Remove and allow to cool before continuing with the recipe.

* How about a simple salad to accompany the paella? Ivan suggests shaking up the following ingredients in a jam jar:

1 tbsp of sherry vinegar, 3 tbsp of Spanish extra virgin olive oil, 1 whole peeled clove of garlic, a sprig of thyme, ½ tsp of smooth mustard, a little orange zest and a pinch of salt and pepper.

* The Dalkey Lobster Festival, sponsored by FLAG North East, runs from August 22-25 and will feature free cookery demonstrations on the main street along with music and entertainment.

The restaurants featured above will be joined by other restaurants in the village including Ouzos and Benito’s, serving a selection of signature lobster dishes. Ballymaloe chef,

Ivan Whelan, will give a demo on August 25 on how to cook and prepare the perfect lobster starter and main course.

To register to attend any of the free demonstrations, go to facebook.com/DalkeyLobsterFest/