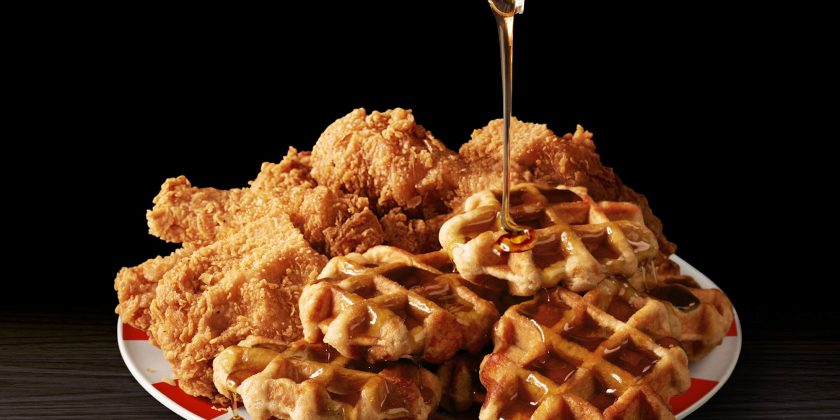 The sweet and savory soul food combination of chicken and waffles is finally making its way to KFC.

On Monday, the chicken chain will add the new Kentucky Fried Chicken and Waffles to their menus nationwide. The dish is made up of their extra crispy fried chicken, thick Belgian Liege-style waffles and a side of Mrs. Butterworth syrup.

You can order it as one breast fillet, two-piece thigh and drum, or three-piece tenders with one waffle for $5.49 or as a “Big Basket Meal” for $7.99 with two waffles and a choice of two-piece white meat, three-piece dark meat, or four-piece tenders. If you’re more of a grab-and-go type of eater, you can also order a chicken and waffles sandwich for $5.99.

RELATED: This Baby Won $11,000 from KFC Because Her Parents Named Her After Colonel Sanders

The chain debuted a similar item in Canada in May with the Waffle Double Down sandwich, which featured two fried chicken fillets with a Belgian waffle wedged between them, and drizzled in a Canadian maple aioli sauce. Now available in the United States with a makeover, Kentucky Fried Chicken and Waffles will be sold at participating restaurants through Dec. 31.

This is not the first time that KFC has surprised us with a bold new menu item. In June, the chicken chain broke the mold of only placing pickles on top of their chicken sandwiches and instead offered their crispy chicken fillets also with a pickle-juice-based sauce.

Other than the occasional menu tweaking, the restaurant likes to connect with fans through a series of annual contests like the Baby Harland Naming Contest. Last month they announced that the parents of newborn Harland Rose, named after KFC’s founder Colonel Harland David Sanders, were awarded the $11,000 prize money to go towards their baby’s tuition.