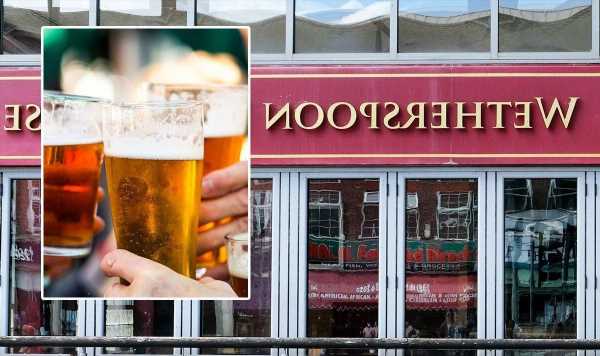 Wetherspoon has branches in towns and cities across the UK. The Channel 5 documentary Wetherspoons: How Do They Do It?! shared some secrets from behind the bar.

Wetherspoon is known for it’s traditional decor and affordable products.

Many branches share the history of the building and the venues range from former cinemas to converted churches and historical landmarks.

This is certainly enticing for customers as it has around half a million visitors each day, according to the documentary.

This is likely down to a number of reasons, including the wallet-friendly prices.

Even in big cities such as London and Manchester, the chain manages to keep the price of drinks down.

It is often cheaper than competing pubs and restaurants around it for food and drink.

With the cost of living increasing, finding ways to cut back is important for everyone.

The documentary unveiled that, while prices are cheap, those who visit are encouraged to buy more than they may have intended.

This comes down to a secret phrase used by some behind the bar thought to promote upselling.

One worker said: “It’s part of the training for members of staff to try and add an extra item onto every order.”

Another added: “[We say] ‘do you want a double or do you want a single?’ We say the word ‘double’ first so it sticks in their head.”

“It works most of the time,” she added while another member of staff agreed.

While a pint may cost less at the pub, the documentary revealed visitors may not always get what they bargain for.

The documentary narrator shared: “Speedy service has to be matched with precise pouring.

“Staff mustn’t give the staff more alcohol than necessary.

“So ensuring a fair share of froth is vital.”

A former pub manager shared every beer must have a certain amount of head on it to avoid giving away more alcohol than necessary.

Another worker added this is five percent and suggested managers test this by weighing the drink.

They claimed: “Managers can test this by weighing a beer.

“They weigh the glass first then I think they are told by head office what the weight should be with a five percent head.”

A Wetherspoon statement said While some customers are still asked “if they want a pint of Pepsi, rather than the standard size” it has “discouraged… upselling of spirits… for the last 10 years.”