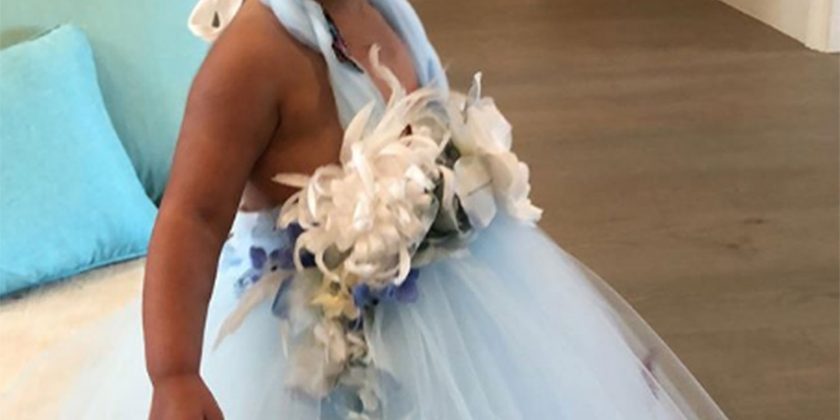 At Dream Kardashian‘s second birthday party, a visitor made it in who wasn’t on the guest list.

As TMZ first noted, it appears—based on footage posted to Kylie Jenner‘s Instagram story—that a cockroach was crawling around the sweets table near the massive cake, which seems to be from their favorite bakery, Hansen’s.

The alleged bug can be spotted in the bottom left corner of the video below (if you have a sharp eye), on the plate of the personalized blue confection for Rob Kardashian and Black Chyna’s daughter, who turned 2 on Nov. 10.

Wednesday’s bash, hosted at the 21-year-old lip kit mogul’s home, was fairy-themed and extra celebratory, as it came just days after the family was forced to evacuate from their homes due to the fires in California.

In additional photos shared by Dream’s aunts Kim Kardashian West, 37, Khloé Kardashian, 34, and  Jenner, the family home was decorated with a giant teepee covered in strands of green leaves, butterflies and pastel-colored balloons. Underneath the teepee, the family set up a table with several pillows around it for the partygoers to lounge and relax.

On a wall near the party entrance, Dream’s friends were invited to transform into their own type of mystical creature. “Grab your wings and fly,” read one sign which had several pairs of strap-on fairy wings and green dinosaur hoodie jackets hanging on the wall’s hooks.

Colorful butterfly streamers also hung from the ceiling above another table, which was decorated with gifts for the birthday girl.

For the occasion, Dream was dressed in an adorable fairy-inspired light blue tulle halter dress. The 2-year-old, whose curly brown hair was pulled up into a bun, also had her poofy tutu-dress match the blue flower crown around her head.

The party also featured some special fairy guests, who made an appearance to the bash wearing their own fancy dresses.

And as if it that wasn’t enough to make the birthday girl remember her special day, the family gifted Dream a baby version of a Bentley Truck.

The sparkly blue car — matching Dream’s dress — was decorated with a bouquet of pastel balloons attached to the baby SUV’s side mirror.