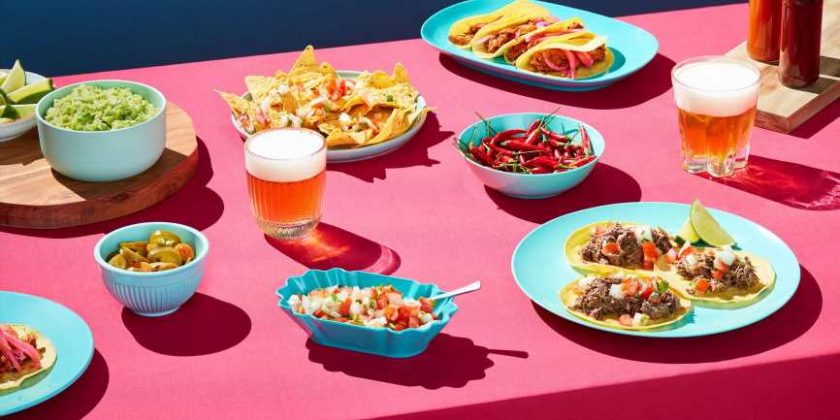 By now, you probably know that a couple of beers on an empty stomach can get you buzzed—even if you’re used to handling four or five. If you’re a lightweight drinker, you can end up downright tipsy off a glass of wine. That’s why the old advice to eat before you drink is smart: While some foods are better than others, the bottom line is just to get any food into your stomach before those drinks hit you.

People get drunk because they drink alcohol quicker than the body can metabolize it. The liver can only process so much alcohol at a time, and because alcohol can’t be stored, it circulates in the bloodstream over and over until the liver processes it all, says Marjorie Nolan Cohn, owner of MNC Nutrition and a registered dietician. Drinking more means that more alcohol is added into the queue to be processed, which raises your blood alcohol level. You can’t force the body to process that alcohol any faster, but you can slow down how it’s absorbed into the blood by eating beforehand.

Why should you eat before you drink?

Packing food into the stomach does three things, says Dana Hunnes, PhD, a senior dietitian at Ronald Reagan UCLA Medical Center. First, it dilutes the alcohol you pour in afterward due to the water content of the food. Then the proteins, fats, and fiber slow down the absorption of the alcohol. It also reloads your body with vitamins and minerals that alcohol depletes.

“Eating anything is better than eating nothing, except perhaps for caffeine and salt,” Hunnes says. Caffeine exacerbates the dehydrating effects of alcohol, she says, and salt affects the hormones your body uses to get rid of water. Salt also makes you feel bloated, and you’re less likely to grab for a glass of water to hydrate yourself if you feel bloated.

Lots of people also believe that eating greasy, high-fat food right before drinking helps because it “coats the stomach” like a protective lining that slows down the speed at which alcohol is absorbed. That’s actually correct—partially, at least. Greasy food, like any food, will slow the absorption of alcohol and minimize the effects of feeling drunk, says Cohn. But it’s not because it coats the stomach. It’s because food, in general, mixes with alcohol in the stomach.

The best foods to eat are fruit and vegetables with a high water content, such as cucumber, tomatoes, bell peppers, and radishes, says Erin Morse, chief clinical dietitian at UCLA Health. If you’re not the type who can live off a meal of vegetables alone, eat salmon or a sandwich in a whole-grain wrap. Hummus is also a good, filling vegetarian option that’s more substantial than fresh veggies.

Steer away from relying basic sweets as a way to fill up before drinking if you have other options. Foods based on simple sugars are digested quickly, and so they’re not as effective at slowing down alcohol absorption, Cohn says. She adds that it’s best to eat a balanced meal of carbs, protein, and fats before drinking in order to lessen the tipsiness that’ll come when you add alcohol to the mix later.

How long before drinking should you eat?

Although you technically start digesting food from the moment your saliva begins breaking it down in the mouth, the stomach is a big mixing bowl and not an assembly line. You don’t have to eat the food long before you take your first drink. Wait to have your first sip of booze at least 15 minutes after you begin your meal, Hunnes says. If you drink right at the start of a meal or on an empty stomach before the meal, the alcohol will immediately be absorbed into the stomach since there’s nothing else in there to slow the absorption rate.

There’s no specific amount to eat that’s a universal rule for everyone. Body weight, metabolism, gender, and activity level are going to affect how much is enough to eat before drinking. Just eat to satiety until you’re not hungry, Hunnes says. You don’t have to stuff yourself, but give yourself permission to go in for more than a nibble.

No foods will worsen your drunkenness outright, according to Cohn, Hunnes, and Morse. As long as you have something in your stomach before you take the first sip, go ahead and rationalize that appetizer plate before the waiter brings out the first round of drinks, even if it’s not an ideal healthy meal. Your stomach will thank you later.