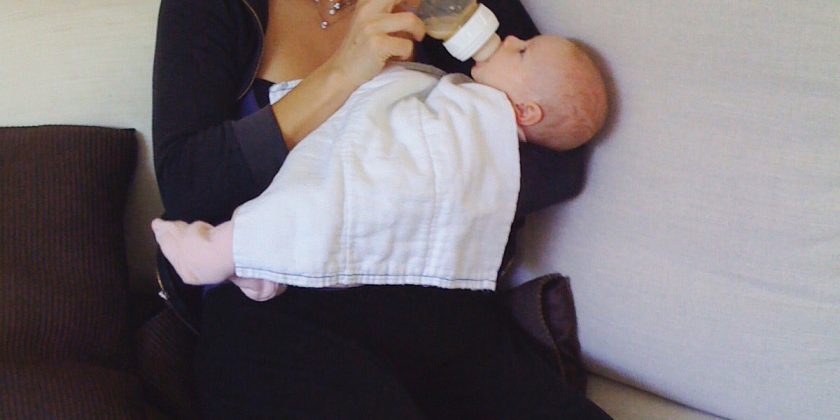 The Food Network star shared a sweet throwback photo from her life as a new mom with daughter Jade, now 10. The picture shows De Laurentiis rocking her natural curls and wearing a navy tracksuit while feeding her daughter a bottle.

“#tbt hard to believe she was ever this small ?,” she wrote on Instagram with the hashtags #mommymoments and #mygirl.

Jade, De Laurentiis’s daughter from her previous marriage to ex Todd Thompson, has not only grown up to look a lot like her mom, but she’s also taken after her in the kitchen as well.

“I bought Jade a little purple ceramic knife and she just loves it,” De Laurentiis told PEOPLE in March. “She’s like ‘What can I chop? What can I cut?’ It makes her excited about what she’s going to make, and then she’s more apt to actually try new things and eat her dinner.”

RELATED: Celebrity Chefs Share Their Ultimate Throwback Photos—Can You Guess Who Is Who?

RELATED: All the Times Giada De Laurentiis and Her Daughter Jade Made Us Do a Double-Take

The fifth-grader has also formed a special bond with the chef’s boyfriend Shane Farley, a TV producer.  “Jade has got two amazing parents, so I can be a part of her life without any pressure,” Farley told PEOPLE. “I really enjoy hanging out with her.”

WATCH: Giada De Laurentiis Opens Up About Finding Love Again After Divorce: ‘I Felt Like a Kid Again’

De Laurentiis has called single parenting “tricky,” so she’s learned when to ask for help.

“What’s helped me be successful is being okay with knowing I can’t do it all. I have a wonderful team of people around me that help me every day. Getting along with my ex-husband really helps as well,” she said of Thompson, whom she split from in 2014. “We’re supportive of each other and, in turn, supportive of Jade.”