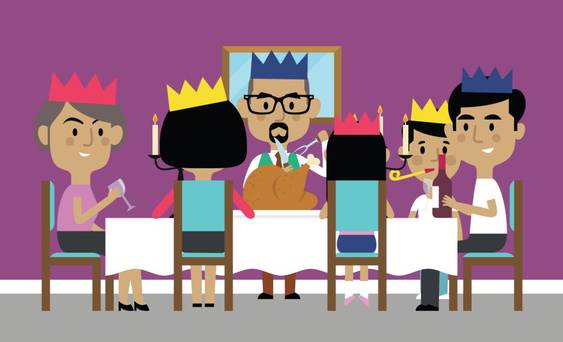 1 Making the cake and pudding

‘Stir Up Sunday’ may have passed, but there’s still time to put on the apron and dust off granny’s 100-year-old recipe. Or, in my case, if the family recipe is anything like my mother’s – she made one large quantity of generic, fruit-filled batter and steamed half (pudding) and baked half (cake) – you’ll do the sensible thing and buy one instead. Eileen Bergin (founder of The Butler’s Pantry) from The Merrion Tree Bistro’s puddings are amongst the best there are. If you insist on making your own, the recipe favoured by those who know their traditional cookery is Maura Laverty’s from her book Full and Plenty. Next morning have a slice fried in butter – some top it with custard and Lemon’s sweets (from the box with Santa on it.)

It’s only for 24 hours that the shops are closed, but still we feel the need to shop as if it is the end of days. Supermarkets will be full of harried folk come the weekend before Christmas, and half of the food in their trollies will end up in the bin. (No, you don’t need 10 bags of breadcrumbs for stuffing.) Do yourself a favour, make a list, and buy everything that can be bought ahead now, and pick up the perishables in your local shops, or book your delivery slot now and order online. The most pleasurable food shop is the one in your favourite emporium – Caviston’s, Ardkeen, Country Choice, Fallon & Byrne, The English Market and McCambridge’s are some of the best.

The very best Irish smoked salmon comes from Frank Hederman, Sally Barnes’ Woodcock Smokery and Burren Smokehouse. London-based food writer and chef Jordan Bourke says that he remembers it appearing every time somebody came through the door of his childhood home – and says that it has to be served with good salted butter and soda bread.

Originally made in Cork by Armenian immigrants to Ireland, the Turkish Delight ceased production for a while but was revived in 2010. Each pretty box contains an extract from a 1964 edition of The Guardian telling the story behind the confectionery.

Not all brandy butters are created equal. Sceal Bakery makes theirs with sea salt; it’s pretty special, you’ll find it at Charlotte and Shane’s stall at the Christmas Flea dublinchiristmasflea.ie at the Point Village from December today and tomorrow.

It’s not a proper Irish Christmas stocking without a Terry’s Chocolate Orange in its toe.

Tinned fruit salad or peaches, jelly or no jelly, there are as many versions of trifle as there are families in Ireland – just make sure to include plenty of sherry (or poitín, suggests somebody from Leitrim who wishes to remain anonymous). Nigella has an excellent Boozy Christmas trifle recipe which you can find online.

Because it wouldn’t do to head into the Big Day on an empty stomach. Cheese, cheese and more cheese – there’s no reason to buy cheese from anywhere else when Irish farmhouse cheeses are so good. For starters, try Young Buck, Corleggy, Tempegall, Shepherd’s Store and St Tola. Cidona, hot port and Baileys are probably the most essential Irish Christmas drinks, but if you are seeking to impress, then book into Ashford Castle to try the fruits of owner Stanley Tollman’s collaboration with Brian Nation, Master Distiller from Midleton Very Rare Whiskey – a bespoke whiskey cask exclusively for guests of Ashford Castle to enjoy, now available to purchase at €950 a bottle. A little more affordable, Eight Degrees Trespass Dark Farmhouse Ale with Blackberries (7.5pc ABV) is a collaboration brew with Jamil Zainasheff of Heretic Brewing. This is a Belgian farmhouse-style ale, that has been Bretted, barrel-aged and blackberried. This is the beer to accompany a traditional roast goose with all the trimmings or a whole honey mustard roast ham (750ml bottles, RRP €9.95). The company has also produced Blowhard Imperial Stout aged in Jameson Barrels (12pc ABV), ideal for pairing with a dark and rich Christmas pudding or a decadent Belgian chocolate mousse (330ml bottles, RRP €4.20).

Mashed, croquettes, roast and gratin – four different kinds of potatoes are the norm at most Irish Christmas dinners. Cook your roasties in James Whelan’s beef dripping for maximum crunch.

A controversial element of the Christmas dinner. Some insist on a bowl of celery in white sauce, while others, such as chef Keelan Higgs, say that the only way is to “braise it in chicken stock, with a big chunk of Alsace bacon and a big bunch of thyme”.

14 The fry on Christmas morning

If you’re going to make your own with shop-bought pastry, make sure that it’s all butter and that your mincemeat is properly boozy. And lay in the brandy butter to serve alongside.

With the number of people who admit to attacking the ham on the way back from Midnight Mass (aka the pub), it’s a wonder that any ham ends up on the table come Christmas dinner. James Whelan’s Heritage Cure ham and Gubbeen’s smoked ham are two of the best for cooking yourself, but if you’re going to buy a cooked ham and try and pass it off as your own, Ian Marconi’s Jack Rabbit version is the one to go for. Sourced from Crowe’s in Tipperary, the hams come from outdoor-reared pigs and are simmered in spiced Christmas liquor before being glazed, studded with cloves and roasted over oak wood and charcoal for a subtle, smoky flavour. They are fabulous. For every 15 hams sold, Marconi is donating one to de Paul. From €60 for a 4kg (before cooking weight) ham. To order, email [email protected]

Liking the look of the chocolate log from Camerino. See camerino.ie.

Another controversial one – more popular with Corkonians than anyone else. Don’t bother making it out of a packet. Delia’s is the classic recipe, but others suggest the addition of thyme and nutmeg.

To be eaten on the sofa whilst watching a movie that you’ve seen a hundred times before. Brennan’s white batch loaf essential, see also Hellmann’s mayonnaise. This is no time for sourdough.

Chestnut or sausage, simple herb and butter, just make sure that there’s plenty of it. Everyone knows that the best stuffing is the one from the cavity.

Crossogue cranberry sauce is traditional but we’re laying in White Mausu’s peanut rayu and new cashew and miso crunch to lend a bit of oomph to our leftovers. See whitemausu.com.

Let’s face it, the smell of the turkey coming out of the oven is probably the best thing about it. Go for a free-range or organic bird and give it lots of love and butter to keep it moist, or live dangerously and try a goose.

Some 99pc of chefs surveyed said they’d be eating Beef Wellington rather than turkey.

Boiled in the ham water until soggy, or shredded and sautéed with pancetta and chestnuts in the modern way, Brussels sprouts are the marmite of the Christmas dinner table. This year we are thinking roasted, with leftovers going on pizza with bacon. Don’t knock it until you’ve tried it.

The most famous purveyor of spiced beef is Tom Durkan in the English Market in Cork; he has it all year round but over the Christmas period he’ll sell 12 tonnes of the stuff. Your local butcher probably has it too. An acquired taste, you either love it or hate it.

Before the festivities become too much, catch the civilised spirit of the season with afternoon tea at somewhere that does it properly, such as The Merrion, The Westbury or Dromoland. You’ll need to book. Quality Street, Celebrations, Roses, After Eights, Elizabeth Shaw mint crisps (“the only time of year we ever buy them”)… this is no time to say that you’re on a diet. If you’re more of a bean to bar person, try one of Bean & Goose’s magnificent slabs instead.

The Curly Wurly is to Christmas what the Crème Egg is to Easter – and it’s all the better if it’s stolen from a child’s Selection Box.

30 The tin of biscuits