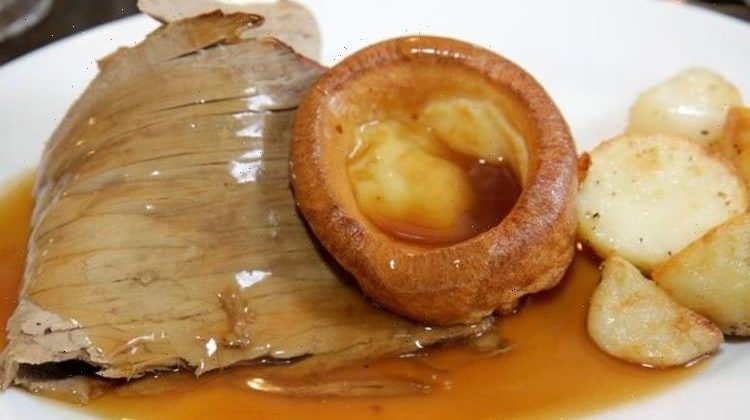 Food historian tracks the evolution of the Sunday roast

Yorkshire puddings, beef and roast potatoes have been a constant part of the English favourite since the 1920s – but a new video shows how things have evolved, with dinner tables now filled with vegetarian and vegan options.

And a survey of 2,000 Brits, that was carried out alongside the creation of the animation, found that a roast dinner is the favourite meal of the week for 40 percent.

Seren Charrington-Hollins, who is working with Aunt Bessie’s, which conducted the research, said: “The roast has been an English tradition for hundreds of years and it is definitely here to stay.

“It is a British institution, and indeed it’s long been considered the staple backbone of the British diet.

“A roast dinner a hundred years ago was a simple affair – roast meat with seasonal vegetables – but it has swelled in terms of portion and variety, and today the roast dinner is as diverse as the diners themselves.”

The video goes back as far as the 1920’s where meat, such as beef, was classed as a luxury and for the rich, but boiled potatoes and seasonal vegetables were a staple part of the meal in every household.

The 1950s saw the introduction of Yorkshire puddings that became favoured with the popular meat (beef), and pigs in blankets – which have since become a Christmas staple – also started hitting the plates as portions began growing in size.

By the 1980s, Brits began taking short cuts when cooking as they had less time to prepare, and the 90s saw vegetarian versions of the roast becoming more mainstream.

The research found that 79 percent of respondents believe a Sunday roast is a British tradition that is here to stay.

Chicken came out on top as the most common meat to take centre stage at every roast dinner affair.

Beef came second, while pork is a regular fixture, followed by turkey.

And while trimmings such as roast potatoes and meat remain firm favourites, as many as one in ten people will consider adding macaroni cheese, rice, or roasted peppers to the plate.

The study also shows baked beans, noodles and even couscous are included by more than one in 20 adults in the OnePoll figures.

Nowadays it seems that many believe buying parts of their Christmas dinner from frozen is the way forward (35 percent).

And more than half are considering buying frozen products this year, because of the reported Christmas food goods shortage we may face (58 percent).

Bisto, Aunt Bessie’s and Paxo were the brands most favoured when cooking a roast, while gravy, mint sauce and horseradish are the condiments liked best.

Just over 15 percent regularly make a roast dinner that is either vegan-friendly or gluten-free.

But coming clean, 42 percent admitted they find it difficult to make sure everything is cooked at the same time, and 37 percent struggle to get their potatoes crispy as well as fluffy.

A spokesman for Aunt Bessie’s commented: “While there have been many changes to the roast dinner over many years, one thing that has stayed a consistent is the Yorkshire Pudding and roast potato.

“It is interesting to see how years ago the roast dinner was classed as a luxury for many, but now we eat roast dinners like they’re going out of fashion.

“You really can’t beat a crispy yet fluffy roast potato, which is why our new recipe is the best yet and makes a roast dinner a quick but delicious meal to make.

“It will be fascinating to see just how the roast dinner may evolve in the next 100 years, and if meat will be swapped for the veggie option only.

“One thing is for sure – delicious Yorkshire puddings and roast potatoes are here to stay.”

THE ROAST DINNER TRIMMINGS BRITS REFUSE TO GO WITHOUT:

THE ROAST DINNER – A TIMELINE: