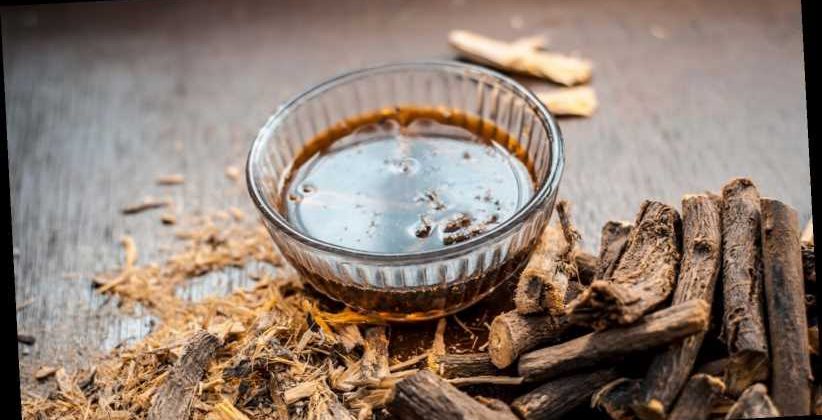 We’re most likely to recognize licorice (or liquorice if you come from the other side of the Atlantic pond) as a flavoring in candies we either loathe or love, if we named them in a list that includes Twizzlers, Good and Plenties, Licorice Scotties, and black licorice caramels.

Humans have been using licorice for hundreds of years — not in confection but in their medicines, which is why licorice root can also be found as a tea. Licorice is derived from a flowering plant that grows in Europe and Asia and is known for its antiviral properties in traditional Chinese medicine (via Candy Fun House). Also known as “gancao” or sweet grass, licorice was used as a pain reliever, as a cough tonic and to address gastrointestinal problems. Research has also shown that licorice delivers on many medicinal benefits because it possesses antiviral, antimicrobial, anti-inflammatory, and anti-tumor properties (via Science Direct).

Far from being a commonly-used additive and food flavoring, many licorice products sold in the U.S. don’t actually have any licorice. The FDA says food manufacturers have been substituting licorice with anise oil, which has the same taste; when it is sold as a dietary supplement, it needs to be labeled as “DGL.” A closer look at its side effects might explain why.

Eating black licorice candy every day is a no-no

While some bodies of research might back up the benefits of taking licorice, there are others that warn of specific dangers posed by consuming licorice every day, particularly if you’re over a certain age.

If you’re over 40, the FDA says eating at least two ounces of black licorice a day for at least two weeks can trigger arrhythmia, or irregular heart rhythm. That’s all down to the compound glycyrrhizin, the same element in licorice that makes it naturally sweet. Glycyrrhizin depletes your body’s stores of potassium, which can trigger not just abnormal heart rhythms, high blood pressure, edema or swelling, lethargy, and, at worst, congestive heart failure. The FDA also warns that black licorice can influence the effect of certain medicines and supplements on your body- and you’ll need to speak to your health care professional if you’ve been consuming black licorice but are also on medication.

And before you think this problem is limited to black licorice, researchers who have published in Theraputic Advances Endocrinology and Metabolism say that the problematic compound, which is also known as glycyrrhizic acid, is also found in beverages and herbal medicines, so the advice against taking licorice every day for an extended period of time would certainly extend to everything that contains its extract.

Licorice has a role to play in combating inflammation and disease

This is not to say that licorice doesn’t have any health benefits — as long as you don’t push it by using it everyday, that is. Harvard Health Publishing notes that licorice may help with heartburn because it helps thicken the mucous lining of your esophagus, helping it combat any irritation caused by stomach acid. Licorice root extract is also shown to be effective in fighting bacterial skin infections which causes impetigo, cellulitis, and folliculitis.

Next time you have a cold, licorice could be helpful then, too. Licorice is widely used to help treat sore throats and can appear in cough syrups, throat pearls, and teas (via Medical News Today). One site even positions licorice as a super herb which, when used daily in vegan skincare products, can be used to prevent sun damage, help dark scars fade, firm up skin, and treat acne (via Face Theory).