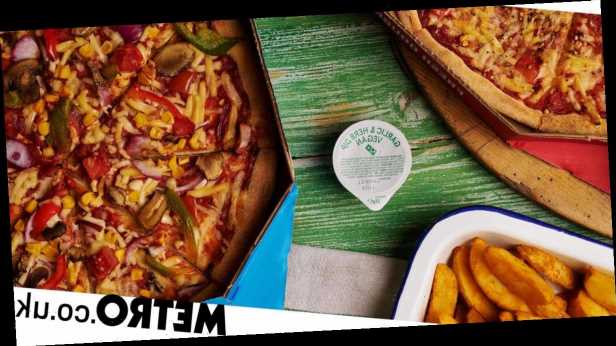 Domino’s is rolling out its vegan pizza dough and plant-based cheese across the UK from today.

The brand had been trialling the pizzas at 46 stores but now they’ve been added to the menu permanently in all 1,200 stores.

From today, you’ll be able to order two vegan pizzas -the Vegan Margherita, made using the signature tomato sauce, vegan cheese alternative, and topped with tomatoes and a scattering of Domino’s herb blend, and the Vegan Vegi Supreme, adorned with a rainbow of vegetables, including mushrooms, sweetcorn, onions, green and red peppers.

You can also use the vegan base and cheese to create your own. Like with the non-vegan range, the price depends on the size and what you add on top.

They’ve previously tried another recipe but after poor feedback, they went back to the drawing board.

This version has gone down better, which is why they’ve decided to make it available to everyone.

Other brands including Papa John’s and Pizza Hut have been making vegan pizzas for a while, but this gives you another option.

It’s not the only good news for vegan fans as the brand is also bringing out a plant-based version of an old favourite – the garlic & herb dip.

The signature condiment is perfect for dipping your slices and some vegans felt they were missing out on the full Domino’s experience without it.

So, the food innovation crew at Domino’s has now created a version without any eggs or dairy so vegans can try it too.

Melanie Howe, Legume Legend at Domino’s said: ‘Domino’s may not be the first, but following fantastic feedback from our recent trial, we’re confident ours tastes the best.

‘Our pizza chefs have been tucked away in test kitchens perfecting the recipe to ensure our vegan-friendly range recreates the unique magic of Domino’s famous original dough.

‘Of course, nothing says Domino’s like our Garlic & Herb dip, so we’re proud to have perfected a worthy equivalent of the legendary pot so our vegan fans can also dunk or drizzle to their hearts’ content.’